In primary schools across Australia, kids are moving and grooving – and for many of them, it’s thanks to Kym Hunter’s Champion Life program.

The program – founded by the UC alumna in 2018 – combines physical activity, social and emotional learning, and wellbeing monitoring in a single digital platform.

The platform incorporates short ‘active brain-breaks’ that make movement fun, mentoring opportunities with real-life community role models, and wellbeing check-ins – to provide insight to teachers about how their students are feeling. 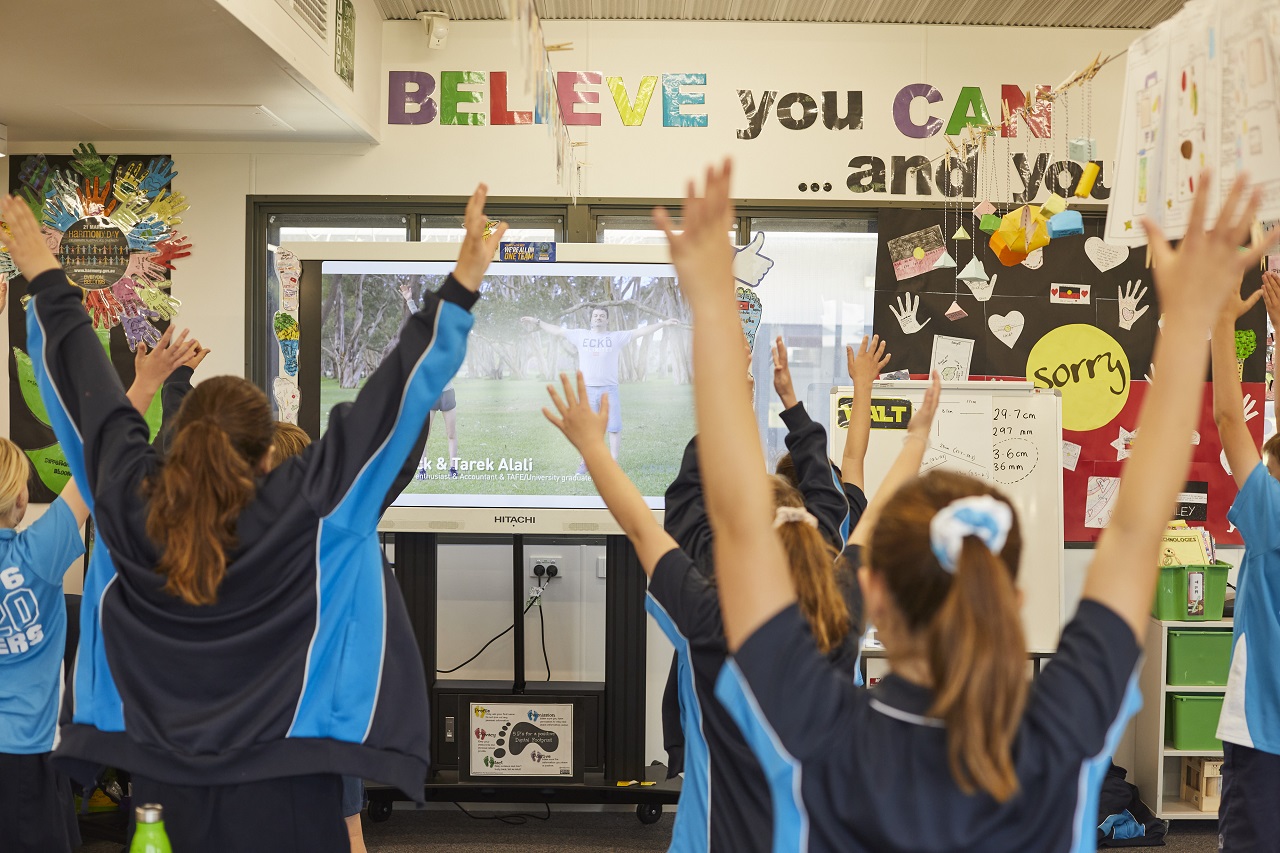 Kym says the idea came about after moving to the Sunshine Coast and having four kids of her own.

“When my kids were at school, their school was great and everyone was super active, but I noticed that when they became teenagers, their physical activity dropped off,” Kym says.

Kym’s background in sports coaching and science – the area she studied in – kicked in, and she started researching the retention rates of kids in sport.

The concept began with visits to schools, bringing along active role models and sports people to inspire the children through talks – but Kym quickly realised that it wasn’t a sustainable business model.

“The initial program had a few really high-profile athletes as ambassadors, which is something that in Australia, we do a lot – throw sports stars at kids to inspire them,” Kym says.

“That’s great for some kids, but it can actually be really, really bad for others. It doesn’t provide realistic and relatable role models to them.”

Kym also wanted to create an ongoing, sustainable program for school students, rather than a one-off visit.

“The question that kept playing on my mind was ‘what is a one-off actually going to do?’. It was around that time that I happened to read an article in The Australian Financial Review about Mathletics, which is an online maths program in schools around the world,” she says.

“Suddenly I realised that the idea of having a tech platform meant I could reach more people.”

And reach she did – Champion Life is now in schools across Australia, with three quarters of them located in low socio-economic areas.

It caters for schools both large and small, with one participating school having a total of just 11 children.

“For that particular school, they don’t have a Physical Education (PE) teacher, so the program allows the teachers to have some support in the classroom to deliver that extra physical activity,” Kym says.

The program now boasts ambassadors from all walks of life, including people living with disabilities, Indigenous role models, and a Syrian refugee. 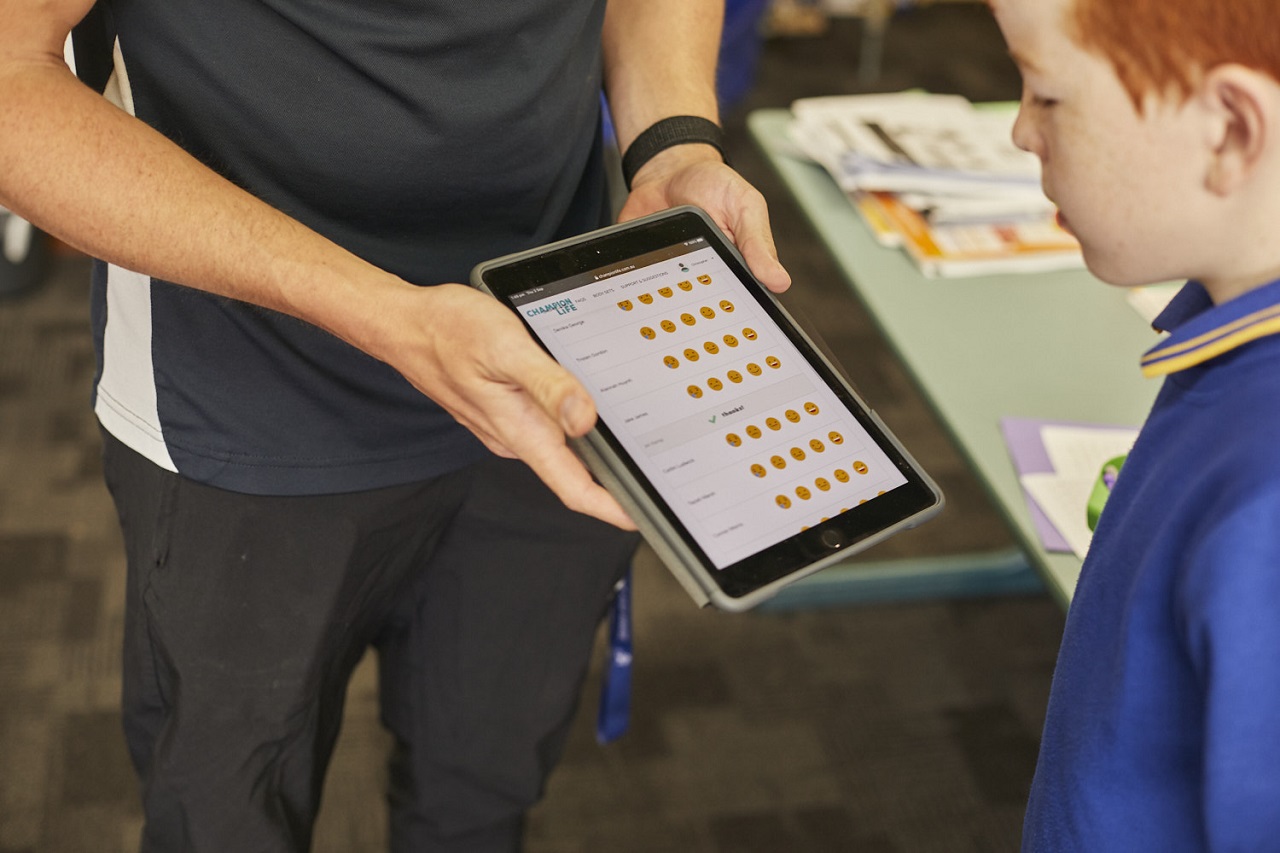 Kym says it was incredibly important to her to showcase the diversity that can be found in communities across Australia.

“I was put in contact with this highly-skilled refugee from Syria, who came on and told a little bit about his story, and when that was played in one of our schools, there was a little girl who very quietly came up to her teacher and said it was the first time she had seen herself and her culture portrayed in a positive light,” she says.

“We hope that all the kids who are involved can have a moment like that – it’s the old adage ‘if you see it, you can be it’.”

With children from almost 100 primary schools around Australia impacted by Kym’s program, she has her sights set on future expansion of the idea.

The programming has recently rolled out to five schools internationally, including in India, Singapore and Dubai.

Excitingly, it’s also expanding into aged-care facilities, with an adapted version enhancing mobility and physical exercise opportunities for the elderly.

“So we’re looking at moving into that area, which is quite funny because we’ll be covering both ends of the spectrum there – really young people, right through to their grandparents.

“My other goal is to deliver to people with disabilities.”

Kym says that 85 per cent of people with disabilities have lower than needed levels of physical activity.

“We have a really great opportunity to help people with disabilities to move more, and enjoy it,” she says.

“It’s not about competition, it’s not about turning them into Paralympians or anything like that – it’s just about helping.

“It’s the same with kids – helping them to understand that they feel better when they’re active, to create that learning opportunity, and to develop physical literacy that will stick with them for life.”

Shining a light on invisible disabilities

Allisha Harvey may seem like your typical Canberra public servant, but that's exactly the stereotype the UC graduate is hoping to change on this year's International Day of People with Disability.