The gender equality debate has gathered serious momentum in 2021, and while advocates agree there is still a way to go, we have some of the best, fighting the good fight, in our own backyard.

Professor Kim Rubenstein and Trish Bergin head the University of Canberra’s 50/50 by 2030 Foundation, coming on board as co-directors in February 2020 with an impressive resume between them.

Founded in 2017 by Australian journalist and gender equality advocate Virginia Haussegger, the foundation aims to see women equally represented in leadership and key decision-making roles throughout Australia by 2030.

Prior to this role, Trish had been working as the Women’s Legal Centre ACT and Region Board Chair, following a long public service career, including a role as the First Assistant Secretary, Office for Women.

Kim had been working with the Australian National University’s Gender Institute, in addition to a position with the university’s Centre for International and Public Law.

“We were both aware of the 50/50 by 2030 Foundation, by virtue of our respective roles, as it was launched, and watched it with interest,” Kim says.

“In 2019, Virginia knew the foundation needed to be amplified to achieve its objectives and that’s when she approached both of us separately about the director role.”

Kim had long been advocating for a public policy step into co-leadership in politics and the business sector, a concept she talked about in her job interview, while Trish had decided to make the move to part-time work.

With an impressive history of advocacy for women and skillsets that complemented one another, the pair stepped into the shared co-director roles.

“We have different skillsets, and while we are both accountable for the role, we are able to work out which aspects we can each take the lead on,” Trish says.

“We share a co-ego in the role rather than individually, and I think that’s something that would be healthy for society to take on more broadly – a collective pride in the position rather than in ourselves.”

While their co-leadership position seems coincidental, it is one of the key advocacies the foundation has been promoting in its push for gender equality.

Following the appointment of Queensland Senator Amanda Stoker as Assistant Attorney General in December 2020, Kim was vocal about her support for gender diverse leadership in Australia.

“What a great innovation to have a woman and a man sharing the role of Attorney General permanently, and to hold them collectively responsible,” she says.

“I honestly think in our Parliamentary context, this will be efficient in every role and we are going to be putting a submission to the government about that, as a way to change the culture in Parliament House.” 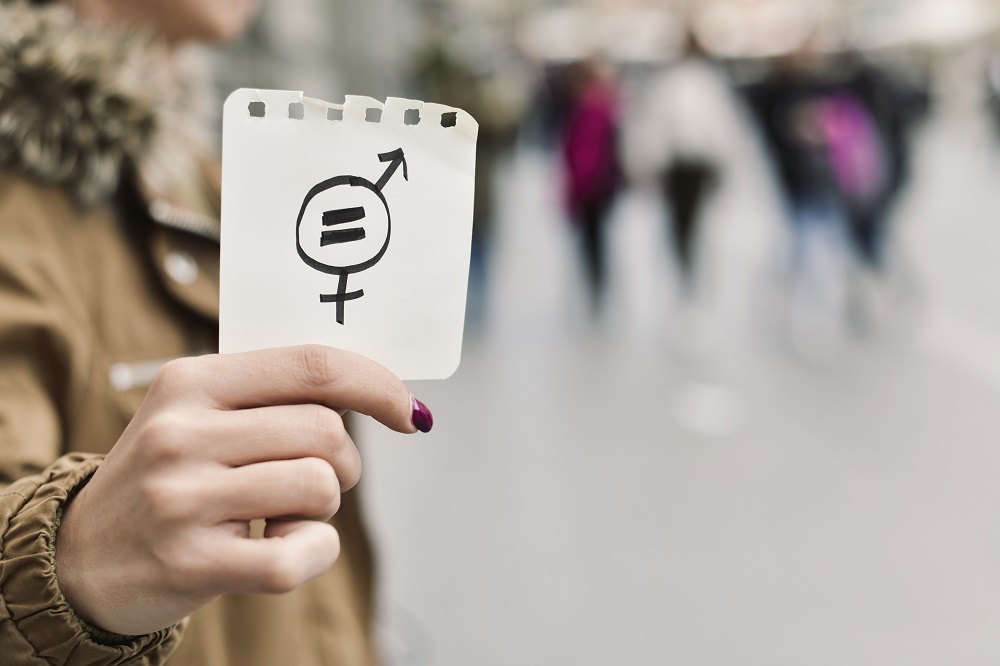 Since stepping into the roles, Kim and Trish have made their voices heard in the gender equality movement not just in Canberra, but nationally.

With media appearances on local radio, Four Corners and Q+A between them, they have been key activists in reassessing the culture and perceptions of the Australian public toward gender equality, starting from the top.

“Following the Four Corners program The Canberra Bubble, we wrote an op ed in The Canberra Times calling for the Sex Discrimination Commissioner to be tasked and resourced to review the culture at Parliament House,” Trish says.

“Following Brittany Higgins’ story coming to light, we wrote a letter with signatures of support from well over 50 organisations and individuals which was taken to the Prime Minister, Attorney General and Minister for Women’s offices.”

In the context of Australia’s progress in gender equality, or lack thereof, we ranked 15th in the World Economic Forum’s Global Gender Gap Report in 2006, dropped to 35th in 2017 and ranked 44th in 2020.

The report is measured on education, health and economic outcomes for women, as well as political representation.

While advocacy plays a big part in the 50/50 by 2030 Foundation’s role, it is also evaluating and building on current research in the area, to change the attitudes and perceptions of the public that lead to inequality.

“Our particular focus surrounds women’s disproportionate care load in the home and what factors we can use to draw out economic structures for parental leave for men and women, or both partners,” says Kim.

“We want government support for both parents being at home in the first period of a child’s life, and changing that expectation of who should be at home by taking away the notion of primary and secondary carers.”

Looking to the future, the pair are hopeful they can play their part in reaching equal leadership and being one step closer to gender equality by 2030.

“I am more hopeful now than I was this time last year,” Trish says. “The unfortunate triggers for the rage, frustration and vocal calling out for gender equality has given us quite a bit of hope and a momentum we can foster and use.”

“I think that’s been quite remarkable about the recent marches and movement – it did include young people – and things like the consent issue being spoken about in schools shows this is a cross generational issue,” adds Kim.

Kim, Trish and the 50/50 Team are looking forward to the forthcoming Inaugural 50/50 by 2030 Foundation Symposium – Equals Now – which has a wonderful line up of presenters and discussions around the Foundation’s themes #Share the Load, #Share the Benefits, and #Share the Power.

Policy makers, academics, active citizens of all kinds are encouraged to register at https://www.broadagenda.com.au/event/equalsnowsymposium/