Mother and daughter Megan Watts and Cathryn Whelband have witnessed – second-hand – their fair share of hardship in the teaching industry, but it stopped neither of the University of Canberra alumni from jumping into the profession headfirst.

Megan is a second-generation teacher, growing up in rural Victoria as the daughter of two educators, and her father the principal of the many schools she attended.

While she grew up wanting to follow in her parents’ footsteps – and even completed her undergraduate degree straight out of high school – her plan came to a screeching halt.

“As the child of educators, I always wanted to be a teacher – but then my father got caught in an inter-family feud in a small rural town, and it broke him,” she says.

“He had a nervous breakdown when I was doing my undergrad and as I watched I said, ‘that’s it, I’m not working in teaching’. I stayed out of it until Cathryn was in Year 4.”

Megan instead opted to train as a chef and work in the hospitality industry while her children were young, until she felt ready to move back into the education space.

Cathryn, now a third-generation teacher, had also heard the stories from her grandparents and had seen her Mum actively working in teaching. Initially, she wasn’t quite sure it was for her.

“I always knew I wanted to work with children, but not specifically as a teacher, after hearing the stories from mum and also my grandparents – I thought it sounded a bit rough,” she says.

“I tried thinking about social work and then I started my Certificate II in Community Studies and worked through the aged care, disability and childcare sectors – but it was the under-fives that got me.”

After taking a gap year, Cathryn began part-time study in a Bachelor of Early Childhood and Primary Education at UC, while at the same time getting married, having a child, and caring for her sick father-in-law.

When she graduated in 2019, her first role in the classroom was in a Kindergarten and Year 1 class in 2020, with the COVID-19 pandemic – and the challenge of online teaching – hitting six weeks in.

Despite seeing the hard work it took to be a teacher from her mother and grandparents, and stepping into her first role during a global pandemic, Cathryn insists it is the right job for her.

“The horror stories are there,” she says. “Every teacher has one or multiple, but for all of those horrible stories, that one little lightbulb moment makes it all worth it.”

“Even with one of my most difficult students in 2020 – to see the growth, lightbulb moments and building that trust with them, is worth all of the hardships.”

Megan’s passion shines just as bright as her daughter’s, especially in the inclusive education space she has specialised in for the better part of her career.

“There I was as a beginner teacher, middle aged, white and with so much privilege – and I was fighting tooth and nail because of my daughter’s chronic illness,” she says.

“There was so much happening, and I couldn’t always get appropriate accommodations even as a professional in the system. I looked at myself in the mirror and wondered what was happening to people who didn’t have my privilege, and I enrolled myself in the inclusive education degree. 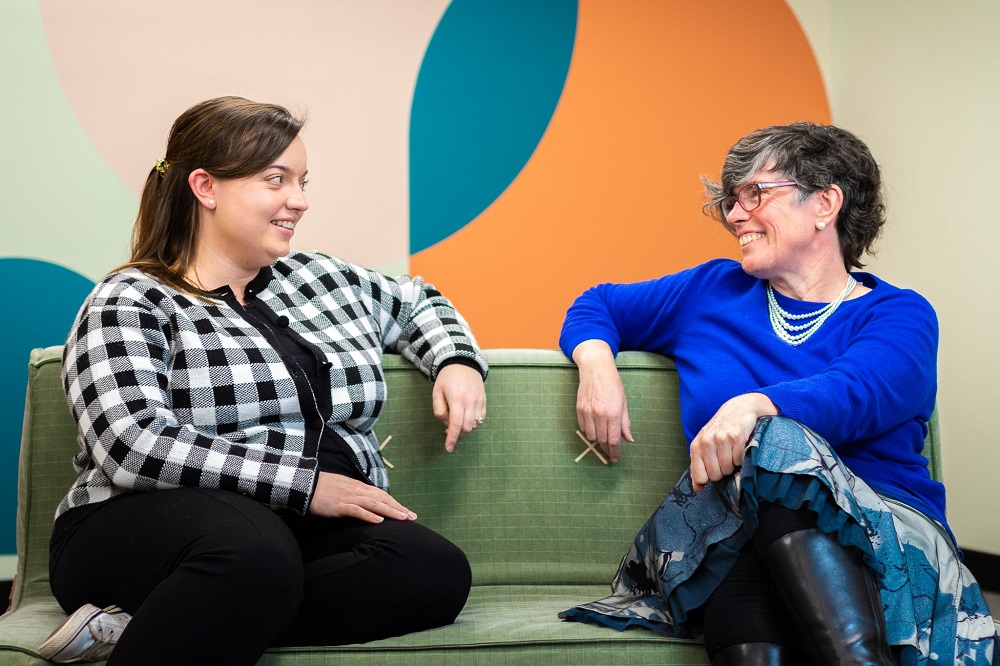 Years on, Megan now works as a lecturer at UC, teaching those inclusive education units and fighting to make the system a better place every day.

Funnily enough, Sian now also works in the education space, but as a circus trainer.

While Megan and Cathryn might bicker about which grade is better to teach, the pair say sharing a connection across their personal and professional lives has deepened their bond.

“I wasn’t as close to mum for a long time, because my sister was so sick and needed her, so I instinctively took a step back,” Cathryn says.

“Now as a mum and working in the same industry, being able to call my own mother at the end of the day and debrief and connect on a personal and professional level, has really helped.”

“It has deepened our relationship and it’s a wonderful thing,” Megan adds. “As a parent, I love my children and I admire them both, and it brings me so much joy to see them changing lives and loving what they do.”

The University of Canberra is celebrating five decades of education since its first cohort of teaching graduates, through its predecessor Canberra College of Advanced Education. To celebrate, we have spoken to a number of those who have been part of our teaching community, to tell their stories over the coming months. Find more stories like Megan and Cate's on our Five Decades of Education webpage.