Eat. Sleep. Study. Train. Repeat. It’s a daily routine for University of Canberra students Emily Hargreaves and Emma Stanton, and it’s one that they love. Emily and Emma are members of the UC women’s volleyball team, which won two national UniSports competitions in a row in 2019.

The girls lead busy lives juggling study at UC with their passion for sport, but they wouldn’t have it any other way. Emma is part-way through her Bachelor of Physiotherapy – her study path inspired by the physios who have supported the team throughout their competitions.

“I’d love to get a job as a team physio and travel around with teams like ours. I’m trying to make those connections now while I’m still studying so that as soon as I graduate I can hopefully get something like that. It would be cool to be able to travel interstate and overseas doing what I love,” she says.

Emily, on the other hand, is pursuing her passion for science and hopes to complete her degree next year.

A typical week for the girls involves training on campus on Wednesday evenings and Friday mornings, in addition to their club games and other sporting commitments.

“I play social netball on a Tuesday night as well as coach a junior team,” says Emily.

“We also both play in the Canberra Heat opens competition and train with their women’s division one team”.

Luckily, both girls say that the support system around them means that they can focus on what’s important.

“Our coaches really understand if we need to take some time off volleyball to study, particularly in the busier parts of semester,” Emily says.

I feel like last year my lecturers were really understanding and helped out a lot too, especially when it came closer to division one nationals. I was also able to get some extensions on assignments, which took the pressure off.”

“The uni really helps out with that side of things.”

Emma believes that although their training schedule is busy, the time away from the textbooks helps her focus when she needs to.

“Everyone in the team is really close and we’re all friends so even though we’re doing exercises and training, it’s still fun. It makes it easier to go and study afterwards – Wednesday night training is actually a nice refresher in the middle of the week.”

“A lot of the girls from the team organise to study together in the Library before heading to training. Having everything here on campus makes things a lot easier - we’re not wasting time driving back and forth to get to training and class, it’s all here in one place.”

“I always view training as a way to de-stress from everyday life,” adds Emily.

“When I go to training it’s all about having fun and being competitive, but it’s a time where I don’t have to think about study at all so that when I do go to study, that’s my focus.”

“It can sometimes be difficult to find that balance with the number of training sessions we have, but you just have to make your way through it.” 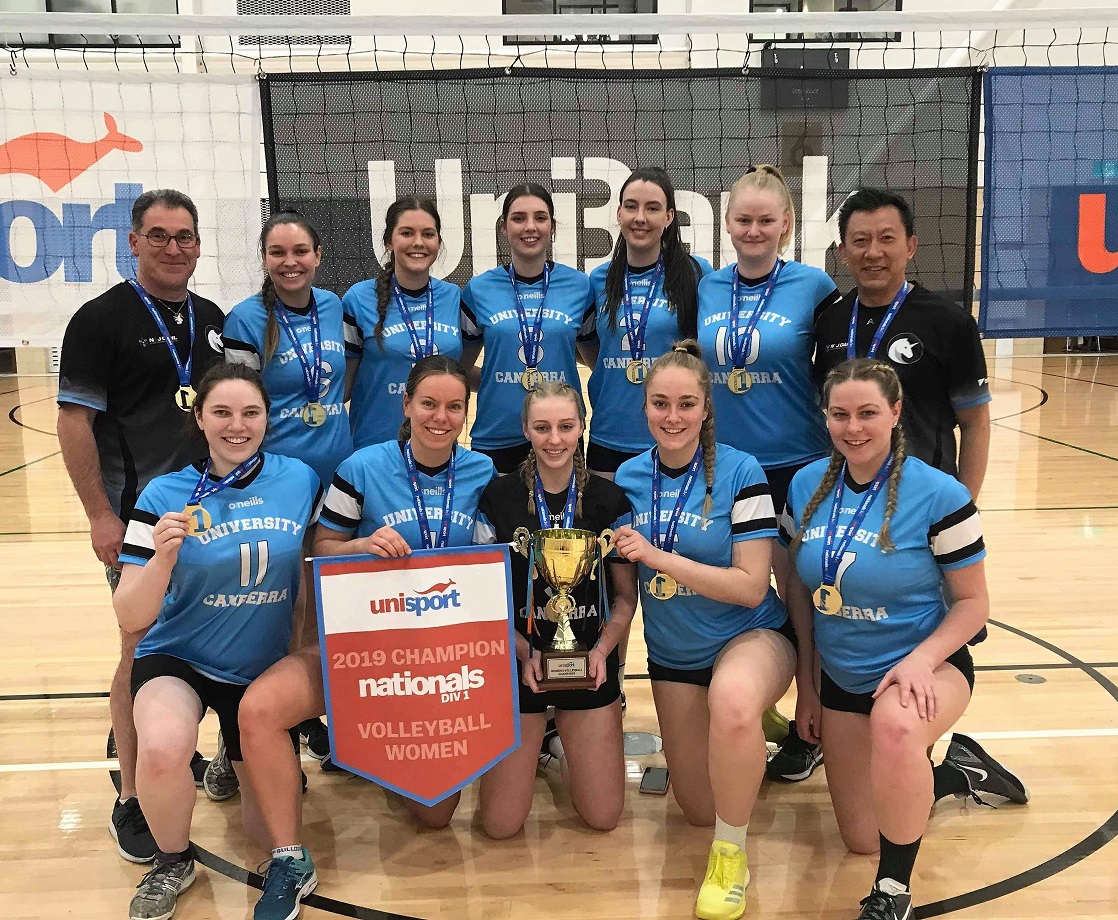 Although Emma and Emily have almost 15 years of combined playing experience, taking the step to a national level with the UC team was a shock for them both. Their opponents’ skill levels were unknown and the team itself was unsure if it would be able to compete with teams from larger universities.

“Growing up playing juniors in Canberra you typically know your opponents so you’re familiar with how they play – you know what to expect,” says Emma.

“Going into nationals, it was a much harder competition simply because we didn’t know who was playing and what level they were at,” says Emily.

Despite their nervousness, the team came out of their division two games without a loss. Their initial success sent them into the division one finals with a positive attitude.

“Our coach has always said to us, if you go into a competition thinking you’re going to win, you’re more likely to actually win,” says Emily.

“We went into that competition pretty confident because we had to be. We knew we couldn’t win without having that good attitude.”

“We always try to have a bit of fun when we play. We’re always laughing and having fun and we play better when we do that.”

In 2020, the team are aiming to go back-to-back, undeterred by the fact that they have lost a couple of star players, with two team members graduating at the end of 2019. With training kicking off this week, they’ve got plenty of time to prepare for success.

A life saved: an extraordinary morning for two of Canberra’s own

For some Faculty of Health students, a faculty-led trip to Nepal changed life perspectives, altered potential career trajectories and expanded their dreams of affecting whole communities.