After refurbishing a brand-new amenities block for a rural school in remote Nepal, a group of University of Canberra students had to figure out how best to deliver a lesson on good hand hygiene to a young audience from a very different culture and language tradition – so they revisited their own childhoods, and drew inspiration from an Aussie classic.

“We taught the kids to sing Kookaburra Sits in the Old Gum Tree as they washed their hands! It takes approximately 30 seconds to sing through it twice, which is the ideal amount of time to wash your hands for,” said Hannah Amann, one of the Bachelor of Human Nutrition students on the faculty-led trip last year. 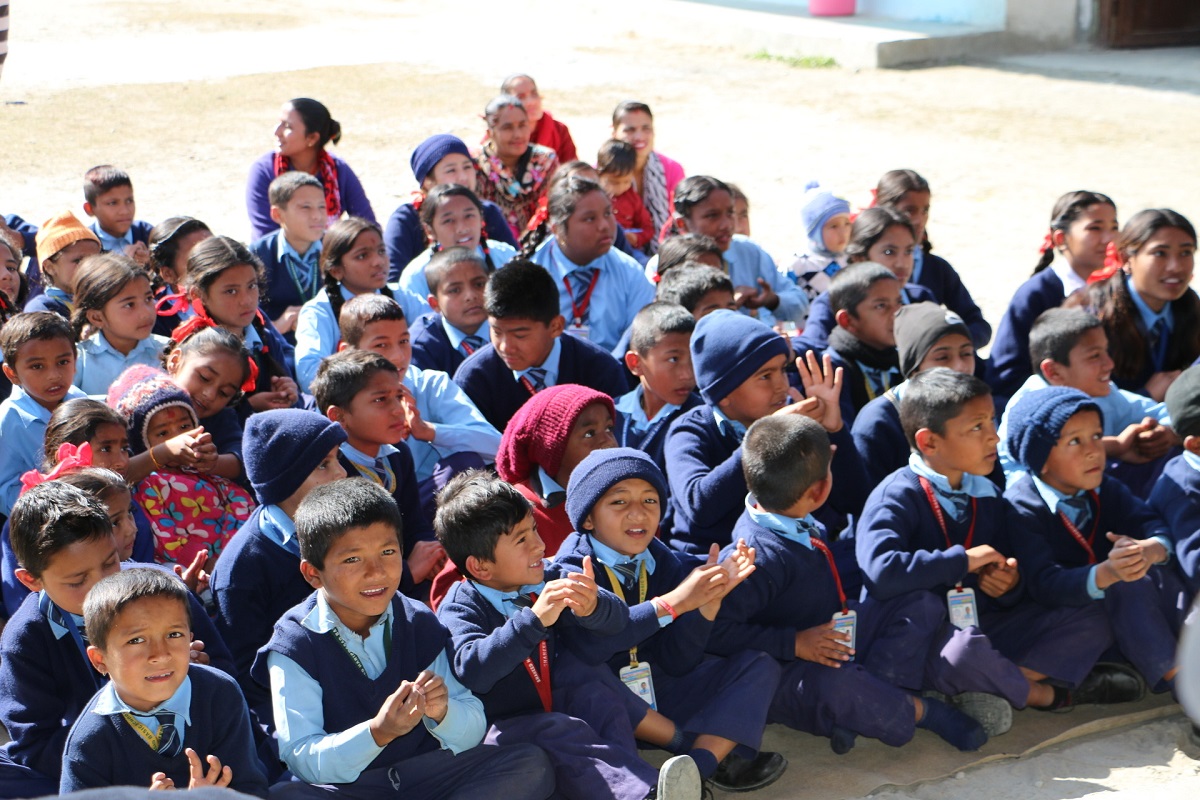 “We had been told that Nepali people love singing and dancing, and so we thought it would be a great way to engage the kids – and it really was! We taught them the song in both English and Nepali, with some of the older girls from the village coming to help.”

The kids, aged between four and 12, embraced both song and hand-washing process with huge enthusiasm – and went home to pass on their new-found hand hygiene practices to their families and neighbours.

The song was even immortalised on the amenities block, its lyrics incorporated into a mural illustrated with native Australian animals. 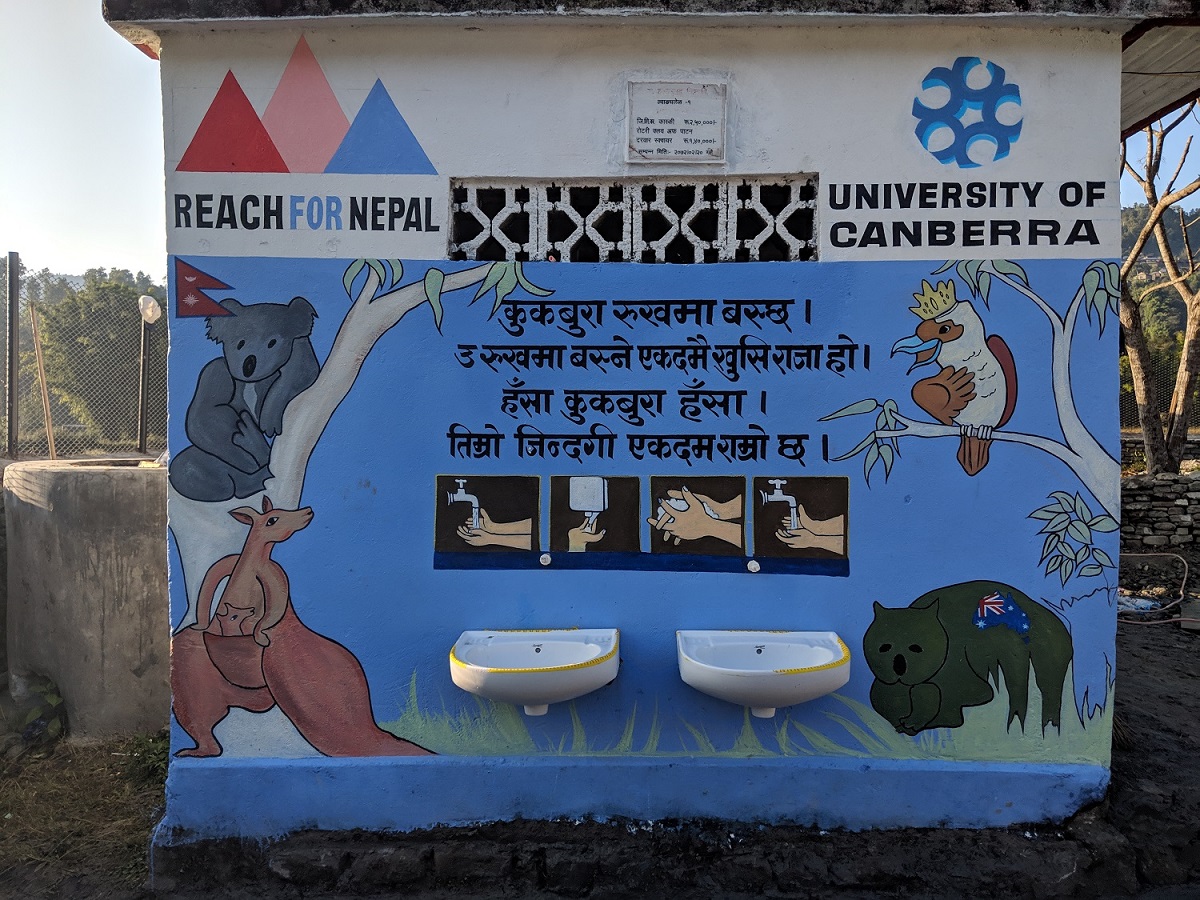 A simple idea turned into a valuable bridge between cultures and an effective educational tool – the spirit of Kookaburra would turn out to imbue the whole trip.

Led by Dr Tanya Lawlis, Associate Professor in Nutrition (Education) at UC’s Faculty of Health, the trip was organised in conjunction with the REACH for Nepal Foundation, whose translators proved invaluable at not only bridging the language divide, but also providing a wealth of information and guidance on cultural matters.

Since most of the students in the group were studying nutrition, this was naturally the focus of activities and exploration. “We found that there was a limited understanding of nutrition in many areas, so that was challenging,” Hannah said.

Translating their nutritional knowledge into a local context proved key.

“We had to rethink our approach to teaching the community about nutrition, adapting it to and basing it in the community, and figuring out what kind of delivery worked best for them,” Hannah said. 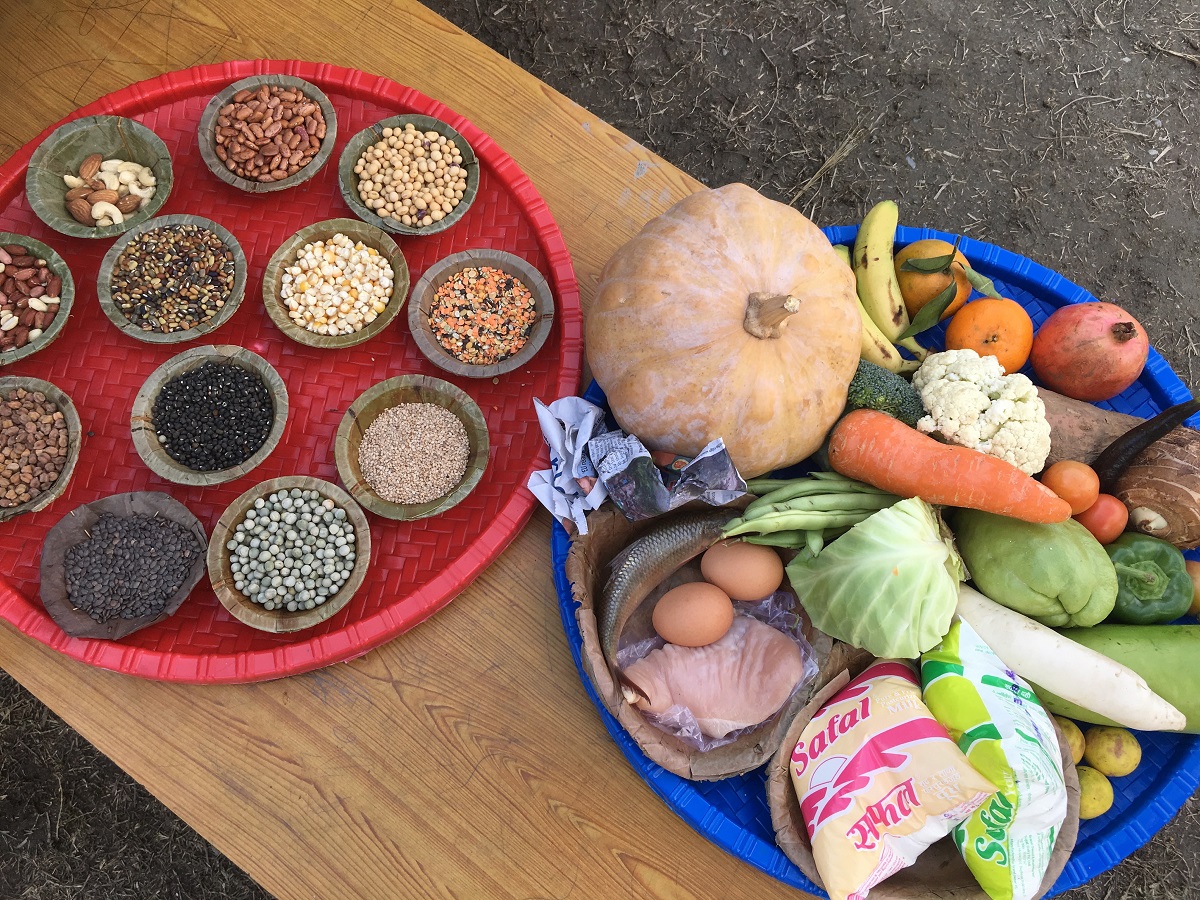 “For example, we used a large tray of traditional Nepali foods to illustrate nutritional concepts and how they work in relevance to their community, culture and lifestyle.

“And we talked about the importance of simple steps, like shrinking rice portions and increasing the variety of proteins and vegetables in a meal – but even more importantly, the reasons behind such steps,” she said.

Pursuing a double degree in both Psychology and Nutrition, Ashlie knows that the two are irrevocably linked.

“Psychology is an integral part of preventative health, because changing the way you eat requires quite a lot of psychological change,” she said.

“Conversely, good mental health also requires healthy eating. Working with that tray of traditional foods worked because it was so simple, easy to understand and therefore remember.”

For Ashlie, the trip marked a welcome return to a country she has a great affection for.

“I had been to Nepal before for volunteer work, rebuilding schools and working with children,” she said. “It was one of the best, most rewarding experiences of my life, and really changed my perspectives – so 14 years after that initial trip, I decided to reconnect with the experience, by signing up for the faculty-led trip.”

Her second trip revealed a Nepal with a developed infrastructure, the damage from the huge 2015 earthquake aside.

“At the same time, the people have held on to their beautiful outlook, their wonderful culture,” Ashlie said. “Access to technology and modernisation hasn’t changed the fact that they are  hospitable, friendly, peaceful, loving people.”

“Nepali society is very much about community good, rather than individual gain.”

The group visited hospitals and spoke to nutritionists and dietitians, gaining great insight into the reality of what people were eating in Nepal. 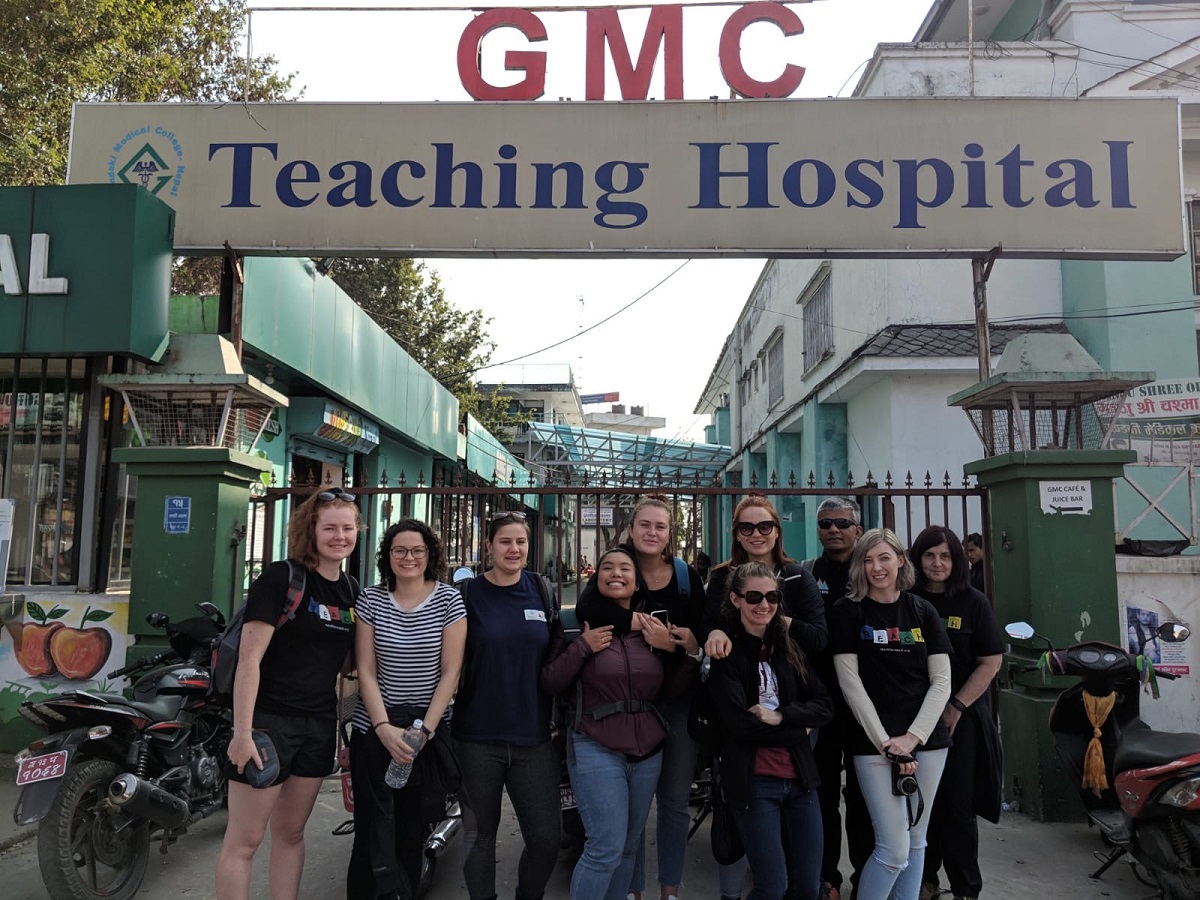 “There are companies selling a lot of highly-processed junk food there, which makes it even more important to encourage a return to eating traditional foods, which are high in nutritional value,” said Ashlie.

“As a nutritionist, you need to be aware of the reasons behind people’s food choices. It usually comes down to availability – and that includes in Australia. There are also cultural reasons, such as those people who become vegetarians because of their religious beliefs.  It’s important to have knowledge of other cultures, in order to know where people are coming from. Being aware of this helps you to prepare options.”

“The lack of preventive health education is an issue in a lot of developing countries. Many governments simply have no budget for it, focused as they are on the more immediate, life and death issues.”

Ashlie says that in the communities they visited, the women were particularly engaged, especially in learning about nutrition for women and children.

“This is probably because of the health issues they face, like iron and calcium deficiencies, especially in pregnant women,” Ashlie said.

So key messages from the group revolved around addressing iron, calcium, folate, vitamin A deficiencies, and varying diets for the best possible outcome.

“Spinach is a common traditional food in Nepal, and that’s very high in iron. But to really unlock the iron in it, you need vitamin C – it’s as simple as having a mandarin as part of the meal,” Ashlie said. 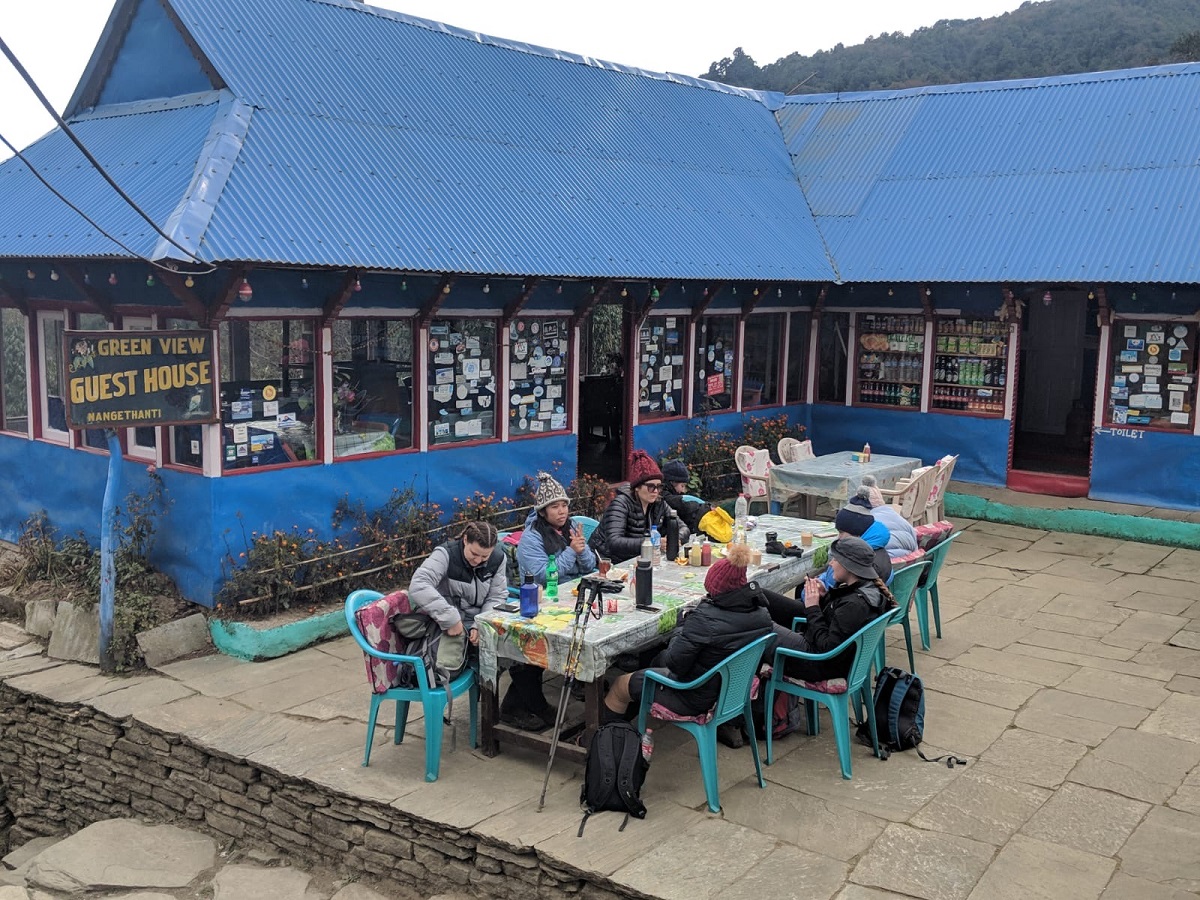 The group also visited cultural sites like the Pashupatinath Temple, and spent five days trekking in the mountains in the Pokhara region, staying in teahouses every night as after-dark temperatures dipped to -8°C.

“The trekking was a real physical challenge – but facing those challenges as a group made me feel more connected to UC itself, and enhanced my sense of community,” said Ashlie.

“As a more mature age student, I don’t really hang out with the younger students, so it was great to connect this way over something meaningful – and I’ll remember them, and this experience, for the rest of my life!”

Ashlie says she would highly recommend the trip to anyone looking to grow, learn and expand their perspectives.

“I learn a lot from people, and travel is the best education – it teaches you empathy and respect, which I think is really lacking in the world today,” said Ashlie. “Getting out of your comfort zone and into a different world, you are forced to grow.”

“Importantly, there is funding available, such as the New Colombo Plan and OS-HELP from StudyAssist – as a single mum, that was really invaluable to enable me to take part in this,” she said.

Almost a year after returning to Canberra, their experiences in Nepal continue to resonate with Hannah and Ashlie. 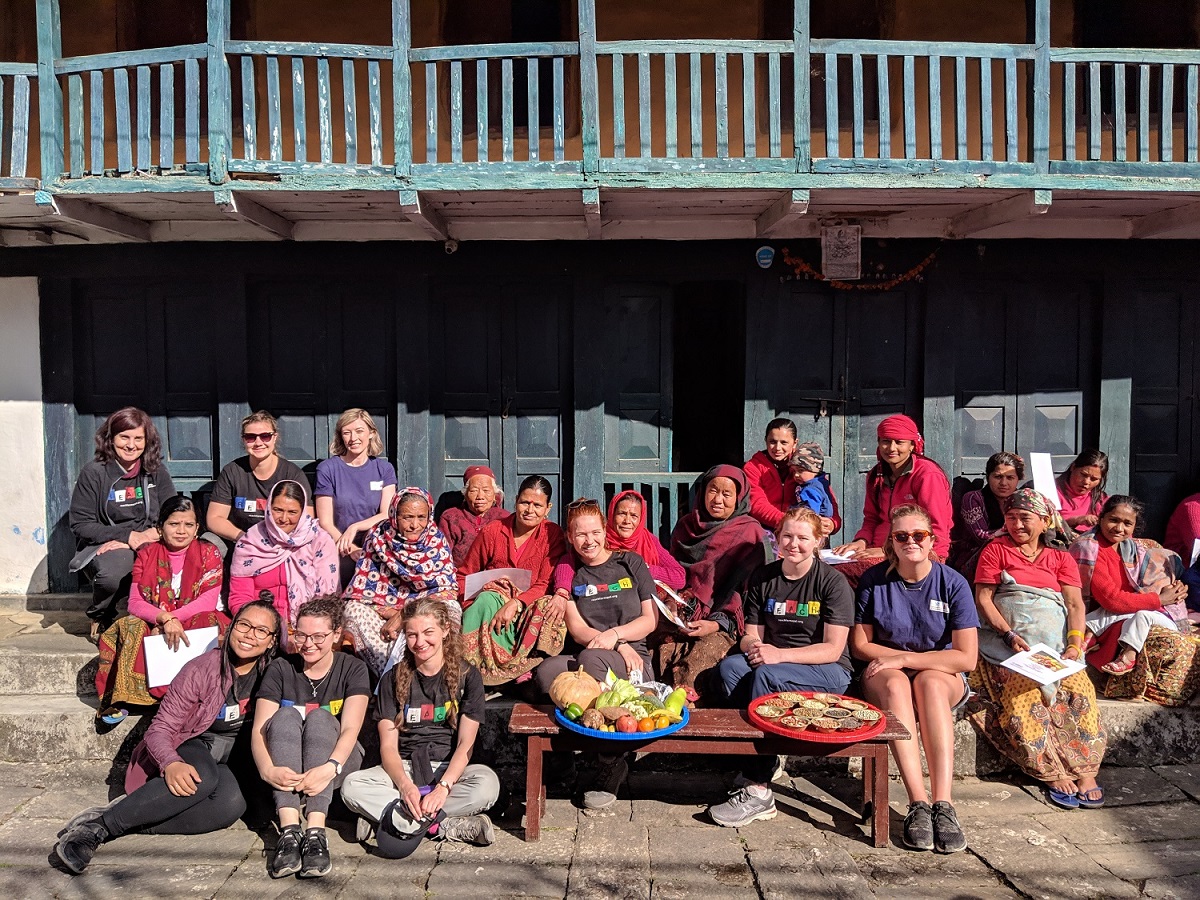 “That hand-washing lesson was such a simple thing, but it felt like we were making a difference – even though it was on a small scale, it was something that could have a lasting impact on that village,” said Ashlie.

With their knowledge of and interest in public health issues piqued by their Nepal experience, Ashlie and Hannah are dreaming bigger than before – they’d each like to pursue a Master of Public Health, so that they can influence policy and impact the healthcare system itself.

“I’ve realised now how important it is to use my education to impact the lives of others who might not have had the same chances I have,” said Hannah.

Their trip to Nepal has crystallised a vision of the big picture for both Hannah and Ashlie.

In the forefront is a vision of making life better for entire populations.

It’s set against the memories of a single sunrise over the hills of the Annapurna region’s Mohare Danda, 3,300 metres above sea level – and a group of singing children.

Click here to learn more about what University of Canberra students will be doing in Nepal for the next three years.

Eating your way to good health

Proper nutrition is crucial to your health – at the student-led UC Nutrition and Dietetics Clinic, science is translated into practical advice for prevention, treatment, maintenance and an overall better quality of life.