Dirk Rose remembers the first time he felt a strong connection to his culture – it was in primary school, when he learned to play the Digeridoo in an after-school care program.

Before that, he often felt unsure of exactly where he belonged. Growing up on the south coast of New South Wales, his family moved around a lot and never settled in one place for too long.

His mother is Aboriginal, but her parents denied their heritage. As a result, she had no information to pass on about which mob she might belong to.

“She’s very proud of her blood and heritage – she’s a strong believer in staying true to yourself and standing up for what is right,” says Dirk, Team Lead, Client Services with the Digital, Information and Technology Management department at the University of Canberra.

Living on the coast, Dirk and his siblings often found it difficult to find out further information about their culture.

“Growing up on the South Coast - I wasn't able to connect with that culture or identity - for me that link didn't really exist,” Dirk says.

Dirk continues to research his family background and heritage and hopes to use the support system at UC to discover more about where he came from.

“Looking into the diversity of cultures across Australia, I find it fascinating, although a little disappointing that I don’t have that link.”

As one of four siblings, Dirk’s childhood was never boring. He spent much of his time outside exploring and going fishing or picking berries.

He thrived academically – setting a high bar for his younger brothers – and was encouraged by his parents to continue further study after graduating.

“You find often that when there are family cycles – where parents aren’t doing well – their kids often follow in their footsteps,” Dirk says.

“My parents were so determined to break that cycle, and they did a really good job.” 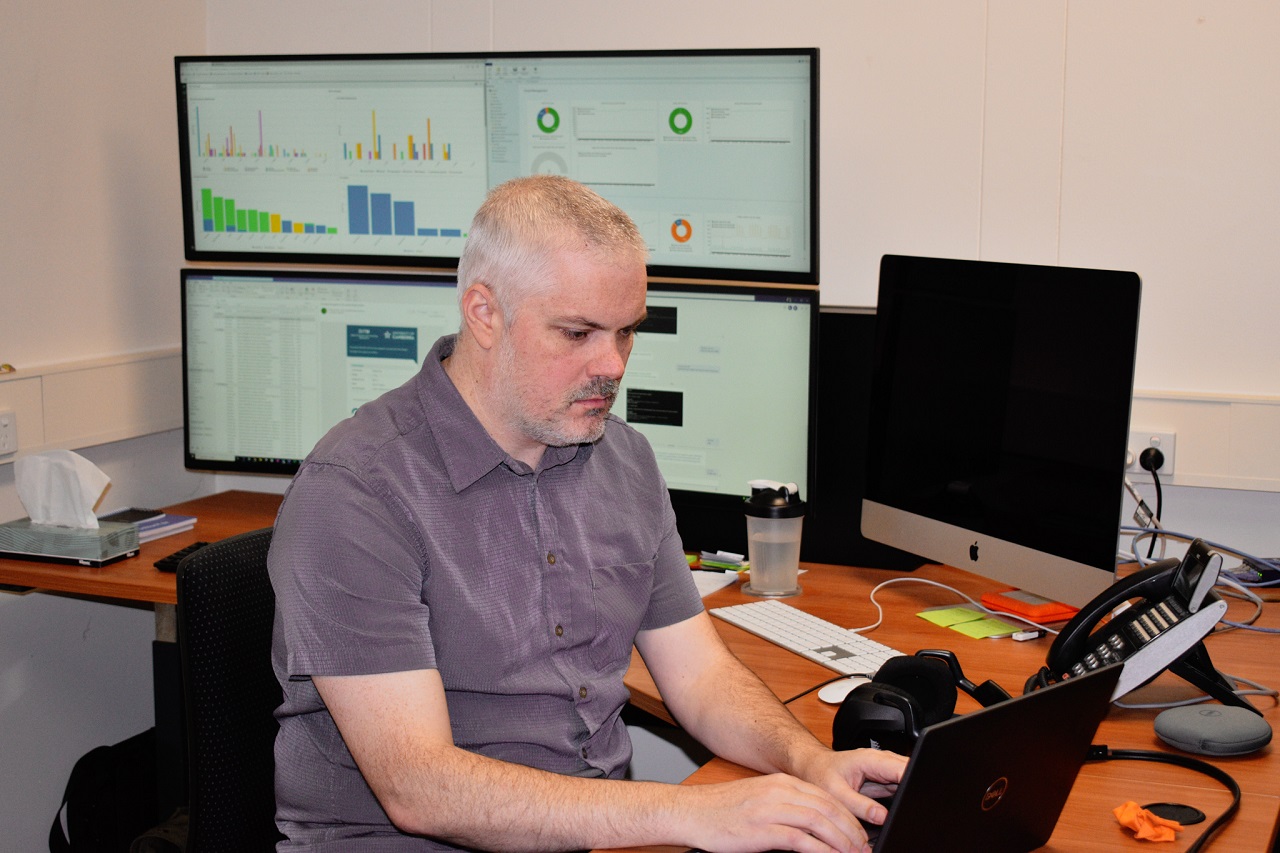 Soon after high school, Dirk joined the Army Reserves, where he learnt the importance of motivation and hard work.

Even after rising through the ranks to do Corporal training, Dirk was left wanting more. It was at this time that some friends began working for an Internet Service Provider (ISP) in Nowra and Dirk discovered his true calling – computers.

He spent his afternoons and weekends building computers out of spare parts, and his hobby soon turned into paid work.

“The building sounds a lot more impressive than it actually is – but really, it is similar to putting a Lego set together,” he says.

In 2008, Dirk’s experience working at the Internet provider, as well as his passion for computer hardware, eventually led him to a job at UC – and he hasn’t looked back since.

“When I first moved here, it was tough,” he says. “I was on my last legs financially, and at times had to choose between eating lunch one day or being able to go for a coffee with friends the next.”

“People have asked me how I didn’t break during that time – but the fact is that I just had to keep pushing, keep working, because there was no other choice.”

He spent his early years at UC commuting between Nowra and Canberra, but eventually moved to Canberra permanently in 2010.

As had happened with his roles in the Army Reserves and the ISP, Dirk’s potential was soon recognised and he was given opportunities to spread his wings.

He worked across many areas in the Digital, Information and Technology Management (DITM) team before earning the title of Team Lead within the client services area.

Inspired by the support he received in his own high school years, Dirk has taken an interest in UC’s Ngunnawal Centre, which supports Aboriginal and Torres Strait Islander students. 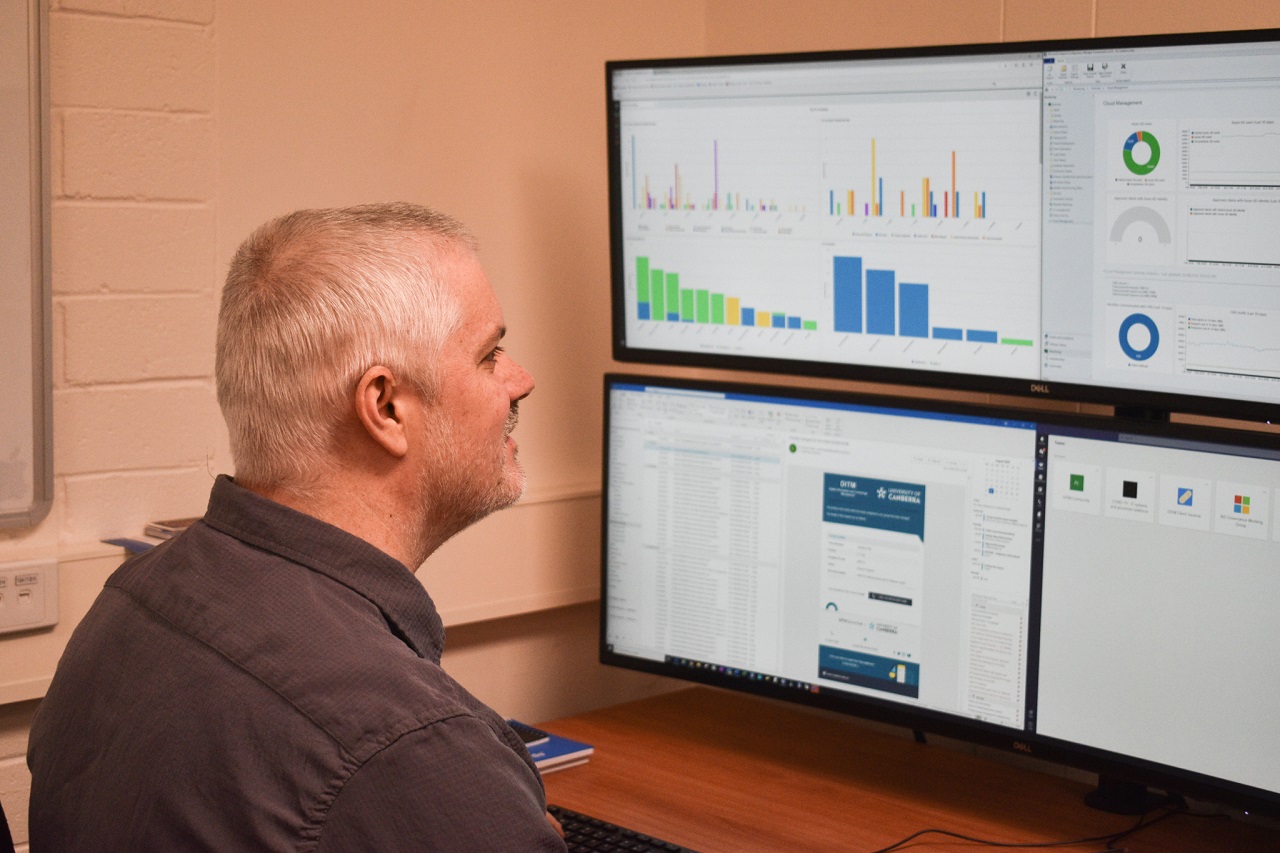 He was part of the team that coordinated the technological fit-out of the Centre’s new premises, and says he would like to continue being involved, helping students that need it most.

“The Aboriginal and Torres Strait Islander programs that I participated in at school were primarily concerned with student welfare rather than any sort of funding,” he says.

“My mum was really active in those programs and we got to mingle with other kids, received tutoring and took part in cultural activities.

“Over the years, I’ve been wondering how I could contribute to the Ngunnawal Centre more –I used to often walk past and think of things that could help it.”

And after all the years of being unsure about his heritage, it seems the realisation that he could be involved with the Centre was a powerful one.

Dirk was also part of the team that was essential to providing a smooth transition to a virtual campus when COVID-19 forced the University to move to remote learning and working.

He had been working for a few years on a cloud-based network system that allowed students and staff to study and work from home – and his work paid off.

“It’s one of those things where I don’t feel like I’ve done anything special,” he says.

“We were working on that system for a few years, and it was one of those things where we just finished the project at the right time.”

For now, he’s happy to keep his head down and continue working hard in a job he loves.

“The people here are great,” he says. “As with any job, there are ups and downs, but I’m truly happy to be working in a place where the Aboriginal and Torres Strait Islander staff are valued, and where we can upholds our cultural values.”

Words and photos by Elly Mackay.

An extra pair of hands to make change

Being involved in Transport Canberra and City Services’ Reconciliation Action Plan was one of the many opportunities presented to Bachelor of Visual Communication student Rebecca Drew during her internship. Her time there will remain with her for the rest of her career.