When the advertisement appeared in a Uganda newspaper calling for applications to study in Australia, James Asiimwe realised immediately that this was an opportunity he couldn't pass up.

The year was 2012 and James says, after successfully coming through the interview process, he arrived at Canberra Airport to be met by a man holding a sign with his name and a waiting taxi. He had selected UC because it was based in Australia’s capital city.

He was 35 years of age when he started at UC. He now holds a Masters of International Development and received the 2017 Distinguished Alumni Award for Philanthropy. But to fully understand what drives James to help the vulnerable women and children in Uganda, it is worth travelling back a couple of years prior to his arrival in Canberra.

James and his wife, Miriam, established a not-for-profit community-based organisation known as KAVC. Both James and Miriam had seen households struggling to access many basic needs including food, income and education. There was a realisation that something needed to be done to help a generation of vulnerable children before it was too late.

In response, KAVC Foundation was established. The organisation initiated a number of development projects including a nursery, along with primary, secondary and vocational schools that provide free education, meals, medication and accommodation to orphans and vulnerable children. 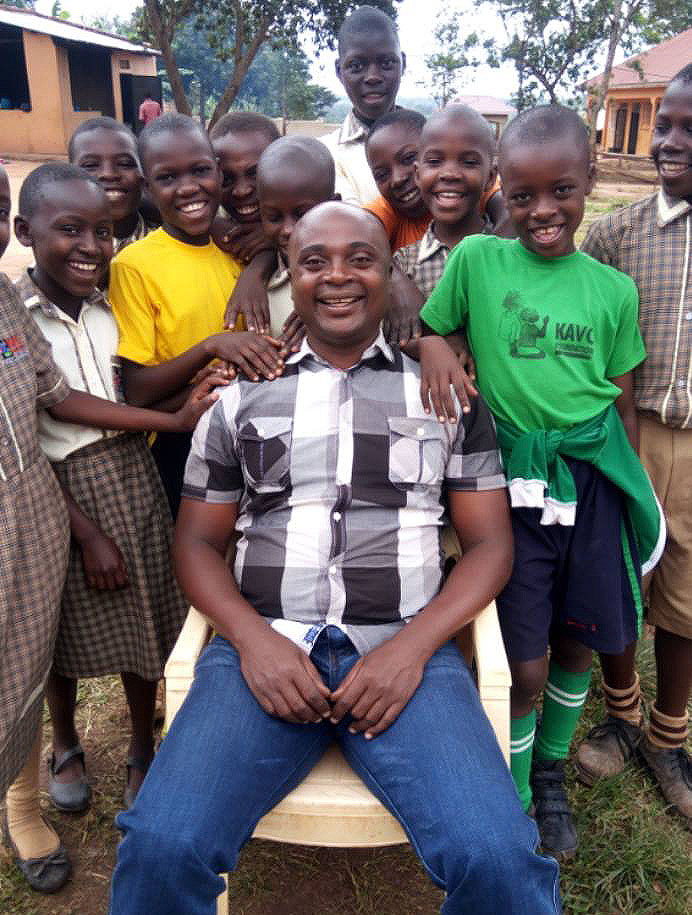 There is also a piggery that supplies to vulnerable women a pregnant pig to breed and sell, establishing an opportunity to create an income stream.

James believed he needed to travel to study in order to build his knowledge and relationships to ultimately upscale his projects and to meet potential sponsors.

“That was the key driving force behind my application for a scholarship. I had previously failed to get a way of travelling abroad to meet new people and share my vision. So the scholarship was a great opportunity for my projects. That was the same reason I selected Development Studies, which enriched my knowledge of managing and delivering my philanthropic projects.”

Fast track to 2019, and his philanthropic projects have changed the lives of many. One hundred and forty vulnerable women have so far benefited from the piggery; 350 vulnerable children are currently being catered for through the KAVC Foundation, the goal being to support them through primary education, to high schools, other institutions and university.

James and his wife Miriam continue to plan beyond what they have already achieved; as James reflects, “My plans are progressing steadily, the KAVC nursery and primary schools are now categorised as fully fledged schools by the government of Uganda. We have now applied for the licensing of our high school. Once this is completed, we will progress to establish a technical school and then a university by 2036.”

James sees sustainability as the key, “I have designed sustainable projects which can independently generate income that will keep them in school and feed when sponsorship is no longer there. I am currently looking for funding to implement a milling project and a farming project with animals and crops.”

The aim is to independently feed families, provide school requirements and pay teachers as well.

James says the Master of International Development degree at UC equipped him with the necessary knowledge that has led to the quick growth of his organisation.

As for his secondary aim of securing sponsors during his degree at UC; James says it created an opportunity to connect to a wider network. This network expanded beyond Canberra, after UC supported James to attend a conference in Canada.

The people he met at UC and Canada are now the main sponsors of the KAVC Foundation. They join James and Miriam in their quest to better the lives of the vulnerable women and children of Uganda.

Nominations are now open for the 2019 Distinguished Alumni Awards. Do you know an excellent leader, a quiet achiever or someone with an inspiring story? Submit your nomination today.