ACT Midwife of the Year and University of Canberra alumni, Sally McRae, is guiding the next generation of student midwives.

Sally McRae says she was inspired to become a midwife following the birth of her three daughters and the positive influence created by midwives. However, Sally took a circuitous route in becoming a qualified midwife. She initially began nursing upon leaving school, but then had 11 years away from the field as she completed a Bachelor of Performance in Piano Degree at the Tasmanian Conservatorium of Music. After graduation, Sally worked for close to eight years as a musician, playing, conducting and teaching.

It appeared to be a perfect life ensconced in music but as she gave birth to three girls, now aged 16, 14 and ten, Sally felt as though midwifery was what she wanted to pursue. She says it is common for women to pursue a career as a midwife after giving birth because of the positive experience encountered as birthing mothers. 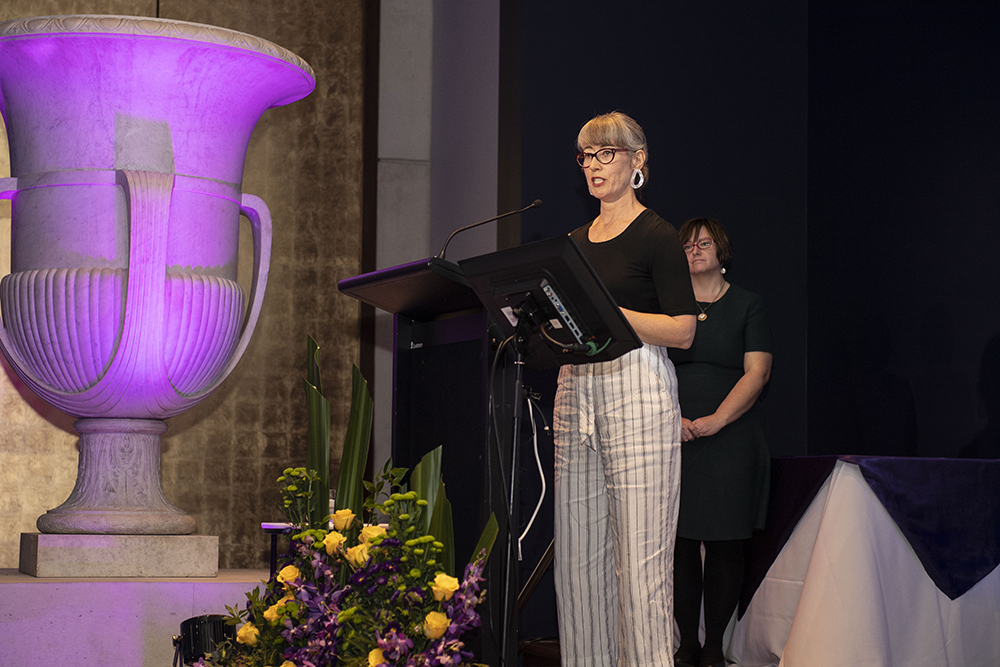 What drew her back to nursing was the ultimate goal of becoming a midwife. Because she was hospital-trained as a nurse, Sally needed to upgrade to a Bachelor of Nursing Degree at UC followed by a Graduate Diploma in Midwifery. Sally then worked for nine years as a midwife before completing her Masters of Midwifery at UC in 2017.

Sally says the practical nature of the UC course was invaluable.

“We were employed as registered nurses and we could work as student midwives.”

Incidentally, she gave birth the day before receiving her Graduate Diploma.

Backed by plenty of life experience Sally says she is keen to nurture the next generation of midwifes in her role as a Clinical Development Midwife at Cavalry Public Hospital. “I love my job working alongside the new graduates who bring with them new ideas,” says Sally.

Her passion and commitment was recently recognised. Sally was presented with the 2019 ACT Midwife of the Year Award, an award she accepted on behalf of her team.

It was a reward, as much for her devotion to the role of being a midwife, as for commitment to guide the next generation of midwives and helping parents adjust through the Bringing Baby Home workshops.

Sally continues to provide the same positive experience to birthing mothers that led her to pursue midwifery in the first place. As for her musical career, that plays very much second-fiddle to being a midwife, although she still plays regularly for the Woden Valley Youth Choir.