He has spent 45 years in the industry, clocking in as the longest-serving director of the Australian Institute of Sport (AIS) between 2005 and 2011. Peter joined the AIS as its first sports physician, in 1981.

So, when he received an Honorary Doctorate from the University of Canberra it held even greater meaning than the recognition of his life’s work.

“Not only does this recognise how far you’ve come in your career, it honours the people that made it possible,” Peter said. “My life’s work is the culmination of the people I have had around me – and that’s how it should be. There are very few honours which are singularly deserved.

“My work has involved me spending a lot of time away from my family. My wife Robyn has been incredibly patient and understanding, as have my kids, Chris, James and Katherine.

“The people I worked with at the AIS and the University have always been so supportive,” Peter added. 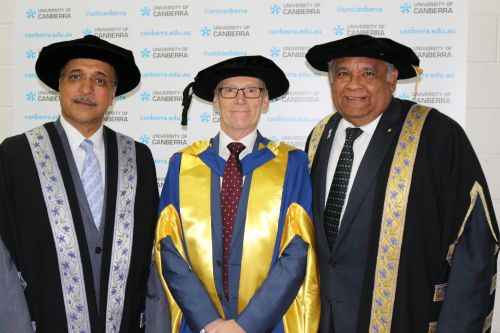 “When the Vice Chancellor rang me, I initially thought it was to do with one of the UC committees I serve on,” he said. “When he told me about the Honorary Doctorate, I was speechless – probably one of the few times in my life that I’ve been lost for words.”

Peter’s long relationship with the University of Canberra dates to when the institution was the Canberra College of Advanced Education; he became a Sports Studies Lecturer in Sports Medicine in 1982.

In 1993, he established the Master of Sports Medicine degree at the University. The program pioneered the education of sports physicians in Canberra, and students came from around the world to attend.

As Adjunct Professor at the University of Canberra, Peter contributes to the Research Institute for Sport and Exercise (UCRISE) Research Advisory Board.

In addition, he has long been involved in research, particularly in the fields of immunology and exercise, and injury management.

Never an athlete himself, Peter’s foray into sports medicine was catalysed by his twin brother, John, who was an Aussie Rules player for the University of Sydney. When his team needed a trainer, Peter, then a medical student, volunteered.

“The experience opened up a fascinating new world of medicine for me,” he said. “I was seeing and learning stuff I had never heard of. I had to do a lot of my own research, and I had such motivated patients – because sportsmen want to do what it takes to get better and play again.”

As a student and then a medical resident, Peter didn’t have his own clinic. He ended up consulting with athlete patients in the lounge room at his home.

“That was barefoot, grassroots medicine,” he said. “They were grateful and responsive, never having had a dedicated sports doctor before.

“I wanted to just be a really good sports physician. And to make a difference in people’s lives – to that end, I decided that I had to be a leader in my field.”

Peter’s focus was two-pronged: to highlight the benefits of sports and exercise to the larger community, and to hone his skills in the realm of high performance sports medicine.

“Being at AIS, in particular, gave me the chance to work with high performance athletes, take the results of that work and feed it into a broader scope across community and occupational medicine and the military – to name a few.

“There were always broader implications and applications, it wasn’t about being in an ivory tower.”

Peter’s remarkable career has included time as the Chief Executive Officer of the Australian Sports Commission. He accompanied the national teams as medical officer and medical director for six Commonwealth Games and five Olympic Games; and he holds professorial appointments with Victoria University and Griffith University.

In 1993, Peter received the Medal of the Order of Australia, which joined the many other awards on his mantelpiece, including the Australian Sports Medal in 2001, the Citation for Distinguished Service to Sports Medicine by the Australasian College of Sports Physicians in 2010, and the Order of Merit of the Australian Olympic Committee in 2012.

After a lifetime of leadership, Peter says there are no retirement plans on the horizon.

“I simply don’t want to retire,” he said. “I like being useful, and intend to be for as long as people think I can be.”

One of Peter’s most important positions though, is as grandfather to his daughter’s two children.

“Now that I set my own hours, I’m getting better at a work-life balance. And being a grandfather is probably the most fun I’ve ever had.”