When Erika Bell (Rodriguez Morillo) walked into the first lecture for her Bachelor of Engineering (Computer Engineering) degree at the University of Canberra, she was one of five women in her class – along with 150 men.

“This was in the 90s, and things have changed somewhat – but women are still a minority in the tech world,” says the UC alumna. “We certainly need more women in technology, and it’s one reason I share my own story – representation matters, and it inspires possibilities and opportunities.”

Today, Erika runs her own consultancy business in partnership with her husband, Shane. She is an active Google Community Program leader, organiser of the Google Developer Group (GDG) Cloud Sydney Chapter and Women Techmakers Ambassador.

“This part of my life is about giving back to the community by connecting members, getting them to come together to network, share information, build those ties,” she says.

Erika has spent over 20 years in the tech industry working in blue chip companies, government agencies, tech consulting firms and vendors in the United Kingdom and Australia – through it all, she remembers the lessons of connection, diversity and inclusivity that she learned in her time at UC.

Last year, Erika’s family celebrated the 30-year milestone of their arrival in Australia. “My family moved to Australia from Peru, when I was 15,” she says.

“My parents, Marita and Victor, were both teachers, and they wanted a better future for their daughter.”

Erika’s mum came to Canberra as part of the Peruvian delegation to the 29th International Maths Olympiad in 1988. This trip was the compelling event that drove her parents’ huge decision to migrate to Australia.

“When we first got here, the world was a very different place, and much less connected. I met so many people who thought ‘South America’ meant Texas – they had never even heard of Peru. Sometimes, it was like being in a parallel universe!” Erika says.

Spanish was her first language, and Erika struggled with her English proficiency in high school.

When it came time to pursue her tertiary studies, her head – and her heart – initially lay with the life sciences.

“I wanted to study medicine, but my English skills weren’t good enough then,” she says. Maths had always been one of Erika’s greatest strengths, so she pivoted her career aspirations and decided to pursue a career in Engineering and Systems instead.

“The Computer Engineering degree at UC was a very highly-regarded, flexible program, and I knew that it would help me develop skills that were highly transferable,” Erika says. “At the same time, the program was very practical and hands-on – and we were all hungry for that hands-on experience.”

Erika was sure that the careers of the future lay in computing and systems – plus, it was the late 90s, and the looming turn of the century had computing on everyone’s mind, with a potential computer-induced apocalypse embedded in the forefront of public consciousness.

Nonetheless, Erika’s parents had raised her to believe she could do and be anything she wanted.

“My teachers and classmates were always very supportive and welcoming,” she says.

“But it’s true that it was a little daunting, to walk into that first lecture theatre, because the tech space was dominated by males. I just knew that I had to work hard to make it.”

Erika remembers one of her lecturers particularly appreciating the perspective that female students brought to team projects. “He pointed out that – in simple terms – the women were generally more communicative and tend to ask questions to contextualise the problem, and get to its heart, while the men tended to try to quickly solve just the problem in front of them, I wholeheartedly agree with this” she says.

“We all bring different value to the table, and working together, our skills are complementary.”

When Erika graduated from UC, she worked in science and technology research for about 18 months.

“I soon realised that it was working on projects that I really enjoyed, talking to customers about their problems and needs and then configuring systems to meet those requirements,” she says. “I switched to consulting, joined the Computer Sciences Corporation, and moved from Canberra to the Sydney branch of the company.”

There, she gained experience in collaboration systems, going on to roll systems out for one of the big four banks in Australia, then moving to the UK and doing the same for oil and gas, transport and logistic companies.

In 2016, she came back to Australia and moved into cloud technology – first in tech marketing, then in pre-sales and cloud partnerships. “It was such a fast-moving world with new tech coming in all the time, and I joined a Google Cloud Partner consulting company, and took a side step into the world of pre-sales and marketing,” she says.

“That’s one important message I’d like to communicate: that roles in the industry have grown beyond the traditional developer roles, there is so much potential and scope for growth – partnerships, marketing, sales, to name just a few. The reverse is also true – people working in these areas will also find that their skills are very transferable to the tech industry.”

Today, Erika still draws on the lessons learned in her formative years, such as the value of combining and connecting different approaches and perspectives – she champions connection and inclusion in everything she does.

“Inclusivity benefits the entire industry, particularly in light of the tech talent and resource shortages we face in Australia,” she says.

“Ultimately, I believe in equality for all – which means equity in access to technology, particularly for those in emerging economies or in socio-politically disadvantaged contexts,” she says.

“Technology has huge potential for people who are inclined to solve problems, or uplift individuals and communities. I want to connect organisations with the same goals, and define pathways to make them happen.” 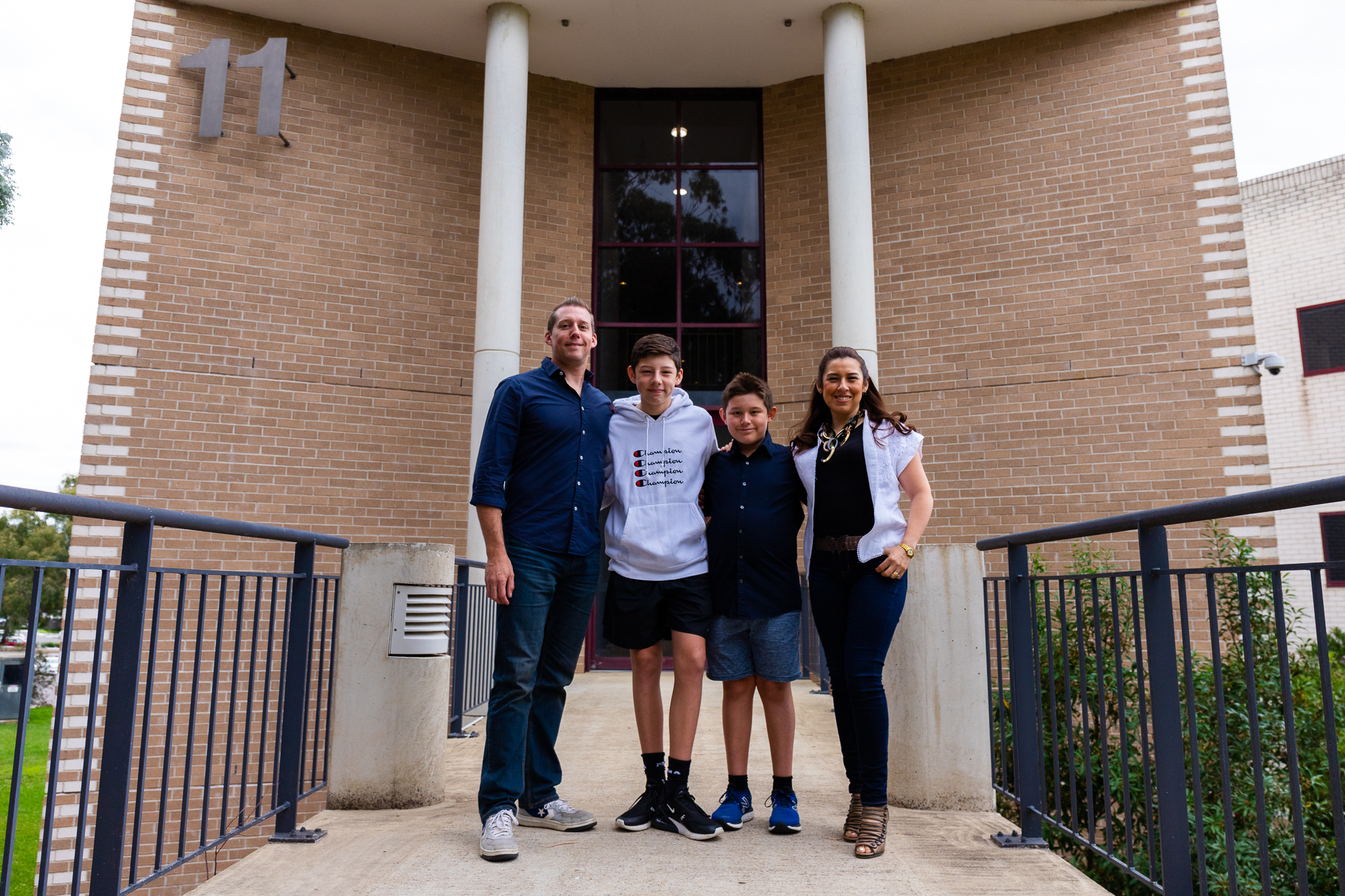 Erika’s time at UC will always be special to her for another reason: it’s where she met her husband.

“Shane was one of those 150 guys, doing the same course as I was – and he has been my biggest supporter in my life and career,” she says.

Another milestone: Erika and Shane celebrated 20 years of marriage in 2022. To mark the occasion, they road tripped with their two sons - Anthony and Brandon - to Canberra, to show them where this part of their story began – UC’s Building 11, which housed the School of Engineering two decades ago.

And what of those five women in that long-ago engineering course? “Of course, we came together, it was almost automatic!” Erika says. “We became friends straight away. One of them was my bridesmaid, and is godmother to my children!”

Kate Woods noticed different tactics in her own schooling saw her either very engaged or very distracted and has taken that knowledge into her own teaching career.