Angry Little Asian Girl: Moments with My Mother is a collection of comics from Lela Lee, featuring the series’ central character, a grade-school Korean girl named Kim, and her mother. Each comic is full of frustrating misinterpretations, irritation, hope and humour, as they navigate differing expectations of their mother-daughter relationship. This is the latest instalment in the hit Angry Little Girls series and the author’s first new release in 12 years.

Let’s go back to the start. How did Angry Little Asian Girl start its life?

Angry Little Asian Girl was created in 1994, after a friend took me to watch Spike and Mike’s Sick and Twisted Festival of Animation. In college, I was generally in a bad mood since everything I was learning was giving names to things I experienced: racism, sexism, gender preference. I felt that the world I was inheriting as a young woman was inherently unfair, but I was so young, I couldn’t articulate my thoughts and feelings.

At the Festival, I was fuming mad when I got out of the auditorium. The most offensive cartoon was about a skinny girl, and a fat girl who is trying to be liked by as many guys as her friend, and she essentially gets date raped.

My friend noticed my apoplectic anger and challenged me to make a cartoon about myself.

I made one that very night called Angry Little Asian Girl, the First Day of School. However, after I put it together, I was ashamed of the anger I expressed in it, and I kept it hidden in a drawer indefinitely. 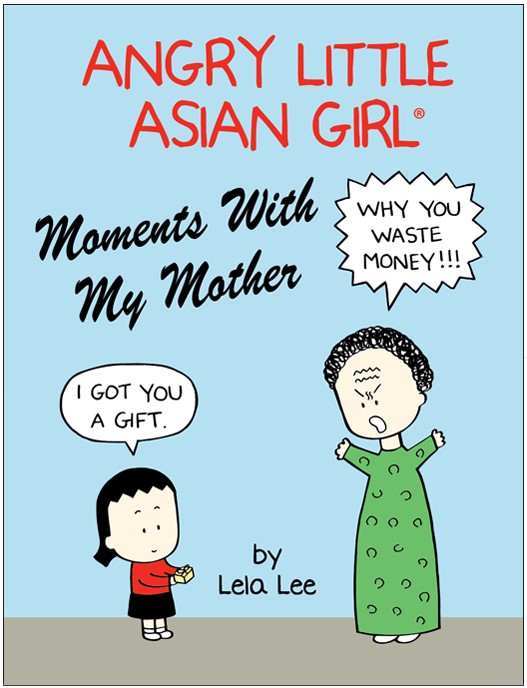 Sometimes with cartoons or comics, you can say things that couldn’t be said in any other way. How does this play out with your work?

It’s less threatening when a comic drawing says what’s really happening. We can’t do that in real life or we are going to be shunned, yelled at, hated, etc. That’s the cool thing about art, it is a message that is not directed at anyone specifically but to the general audience. It’s a safer way to deliver truth.

You use foul language – and sometimes, shocking imagery – to bring attention to issues surrounding the intersection of being Asian and a woman. Why?

I use foul language because it works against the stereotype of being quiet and polite. It disrupts expectations and allows the message to get into people’s brains in a jarring (but not harmful) way. Comedy is also about setting up something commonplace – and then presenting something unexpected.

Despite the hilarity and (wonderful) shock factor in your work, you’re often making commentary about the way Asian women and girls are confined to passive and subservient roles – domestically and publicly. You also attack the patriarchy a lot. Tell me about that.

I yell at the patriarchy and hierarchy in the comics because where else can I vent about it? My Asian elders are so hard-headed, and my Asian culture is (generally) so obedient and no one is encouraged to self-reflect.

It’s just: keep your head down, make money and serve your male family members or other people more important than you. Women and girls are on the lowest rung of the hierarchy.

Only when a young woman becomes a mother does she have any power – but it’s over her kids. These new mothers, who never had any power over major life decisions as daughter, go bonkers with their kids. I think it’s why Asian women become tiger moms. They need to take their frustrations out on someone. She can’t yell up the ladder, because she will be punished and put in her place – but she can yell at her kids.

I’m not Asian, but some of your themes resonate with me and the mother-daughter relationships in my family (I’ve got a Jewish background). I note your work has also been translated around the world. Have you been surprised that Angry Little Asian Girl has resonated so deeply with so many people, and across cultures too?

At first, it surprised me, because I’m an accidental artist. But then, as I studied cultures around the world, I noticed that the thing we have in common with women around the world is that patriarchy is global.

Every country’s foundational beliefs are built on it. Some countries are more progressive than others, but each country and culture is on the patriarchy spectrum. 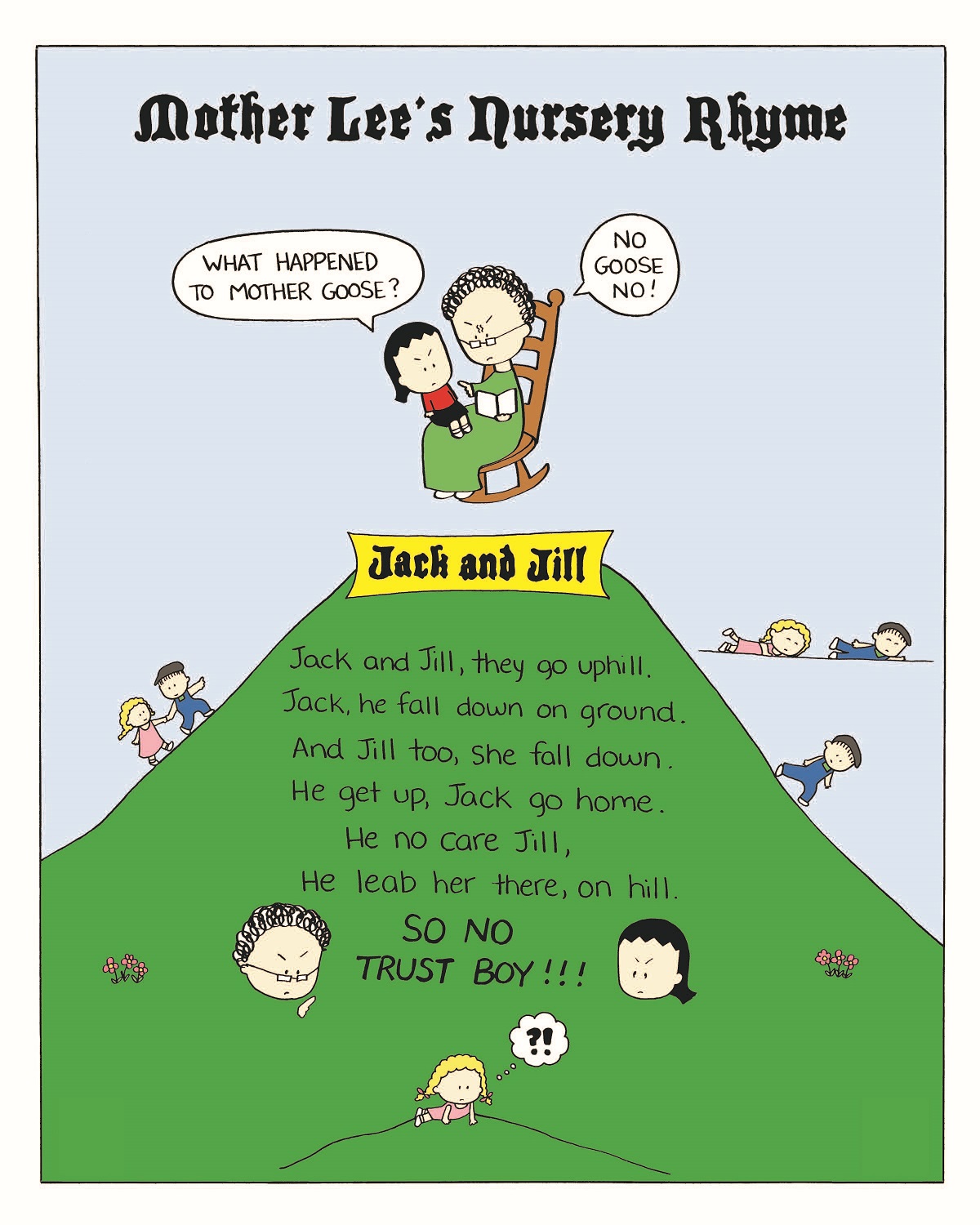 What was it like to pick up this series after a 12-year break? Did you come to it with any new perspectives or insights?

I never stopped drawing my comics. I always showed up to my drafting table to draw a weekly comic. That was something I could control.

What I couldn’t control was the recession, and how it slowed down retail and publishing. So the products that I produced stalled, as well as the publication of books.

But publishing has changed so much in a decade. I was so excited when I discovered self-publishing for authors. It opened a door that had been open for me in the past, but then closed because of market factors out of my influence.

So really, I made a new book because I discovered that I could make the book without a traditional publisher.

I understand your hiatus was because you took time out to care for kids. How has having your own kids made you reflect on the mother-daughter relationships in your comics? Has your thinking or creative process changed at all?

I think motherhood is an amazing experience. I was so afraid to become a mom. I was afraid of losing my ambition and opportunities, but my husband really wanted to have a family and he is a great guy who doesn’t ask for much. I was running out of excuses and so I finally let it happen.

Being a mother is the hardest and best thing I have ever done. I focused on caring for my kids because I felt it was important for my husband and I to raise them. We were very hands-on and it was exhausting, but it was a great experience.

I learned a lot about myself. Motherhood reignited mother wounds that I thought I had overcome, mostly caused by the fact that my mother was always working. But as I juggled work and babies, I understood how hard it must have been for her.

I found motherhood to be tricky and triggering, but I used it to heal me of the things that haunted me. And those insights do leak into my art.

One last thing! You’re also an actor and you’ve been in the hit series Breaking Bad…

I was very excited to have played a librarian in S5 of Better Call Saul. I am a huge fan of Breaking Bad and the Better Call Saul spin-off, so on set I had to contain my inner fangirl. =)

This article was first published on BroadAgenda on 27 April 2022. Photos: provided.

Words by Ginger Gorman, the Editor of BroadAgenda. Ginger is a fearless and multi-award-winning social justice journalist and feminist. Her book Troll Hunting came out in 2019, and she is the gender editor at HerCanberra.

Ginger hosts the popular "Seriously Social" podcast for the Academy of the Social Sciences in Australia. Follow her on Twitter.

For Canberra artist Tommy Balogh, the opportunity to collaborate with the University of Canberra on a piece of art has been invaluable.