Alakiir is a young woman with a remarkable story. Born in a refugee camp in Kenya during a period of conflict, she moved to Australia at just 11 years old with only a very basic grasp of the English language. Despite this challenging start, she is now studying a Bachelor of Nursing at the University of Canberra - it’s a testament to her hard work, and resilience. Here’s her story.

Alakiir remembers only snippets of her early life, growing up alongside her siblings and cousins in the Kakuma Refugee Camp. She remembers that her parents, who were originally from South Sudan, worked hard to keep her sheltered from the conflict. She remembers a period of displacement, when they were forced to move refugee camps to avoid attacks.

“My story starts with my parents. They were the first ones that came to the camp in 1994. Then my sister was born, and I was born,” Alakiir says.

“There were ups and downs in the camps. Sometimes it was safe and sometimes not, but my parents managed to keep us safe.”

In 2010, the family received good news: they had been accepted to Australia on a Humanitarian Visa. It was a ticket to a safer life, and one which Alakiir’s father had hoped for over the many years while living in refugee camps.

“My dad was the one who applied for resettlement here. He heard about Australia, and I think he thought that maybe it would be our shot to make a life. He wanted us to get a better education than when we were in the camps,” Alakiir says.

Starting at a new school is a nerve-wracking experience for any child but for Alakiir, this struggle was compounded with starting in a school a world away from her home, where her peers spoke a language she didn’t understand. She initially struggled to find her feet.

For Year 7, Alakiir moved to the Secondary Introductory English Centre (SIEC), based at Dickson College, which helps students in years 7 — 10 from culturally and linguistically diverse backgrounds to learn the English they need to pursue an education.

“When I went to [SIEC] there were other Africans with the same background as me. That’s when I met people that were my skin colour. When I was learning, it was hard, but I got there in the end,” Alakiir says.

By the time she moved to college, she was making great progress with her English and her studies. It was at this point that she had to begin deciding what she wanted for her future. She tried a stint in the retail industry before dipping her toes into aged care and childcare.

“I enjoyed the aged care work the most, and that’s where my interest in nursing came from,” Alakiir says.

She completed a Certificate III in Aged Care at the Canberra Institute of Technology and started to look at further opportunities from there.

“I wondered if I could make it at university. I was scared to apply. I didn’t think I would get into uni,” Alakiir says.

“When I received a letter from UC, I couldn’t open it straight away. It took me days! When I opened it and got the offer I thought ‘no way!’ — I couldn’t believe it.”

Alakiir had received direct entry into her preferred course of study, a Bachelor of Nursing, and commenced studying the next semester. She was welcomed by UC’s Refugee Transition Program, which is run by Student Equity and Participation  and designed to provide students from refugee backgrounds with the support and resources they may need to navigate university in Australia. Through the program, Alakiir has access to a tutor and financial assistance to support her learning.

"I feel like I gained more confidence through the program. If I didn't come to this program, I don't think I would have passed," Alakiir says. 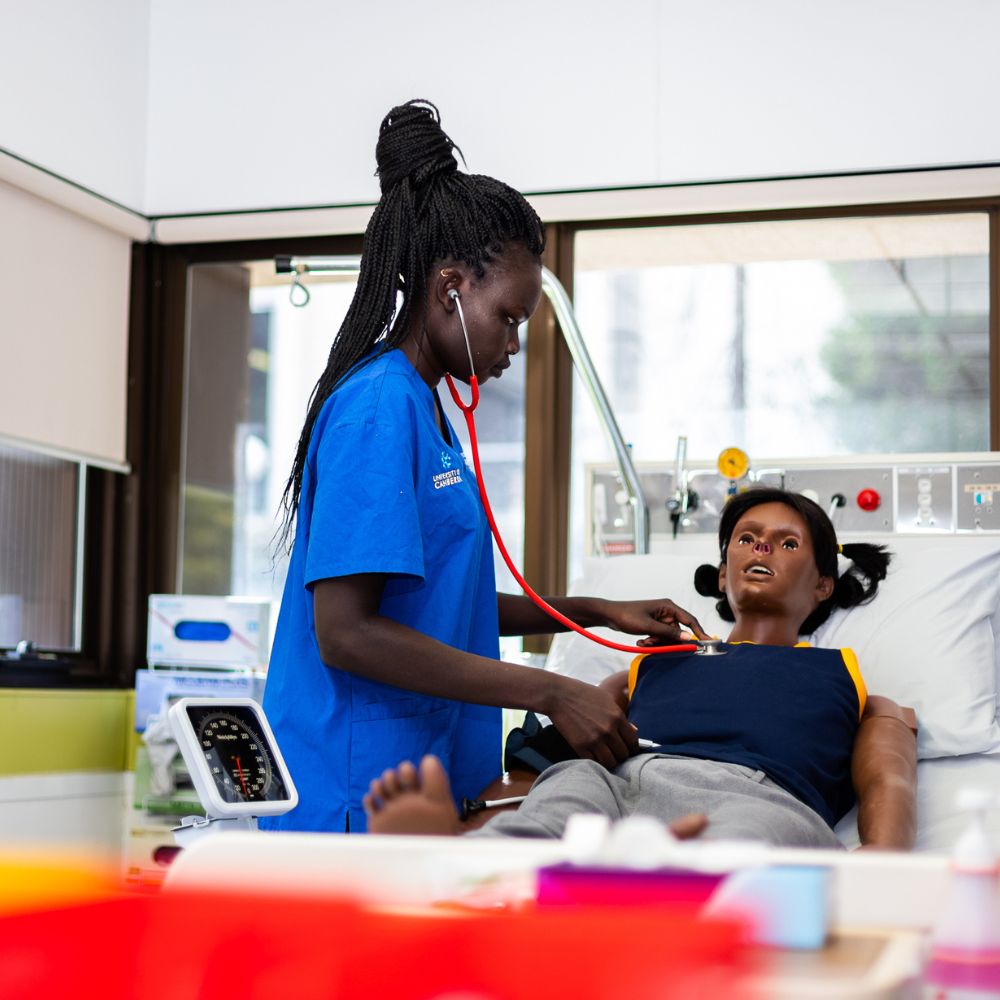 It wasn’t all smooth sailing for Alakiir as she embarked on her higher education journey with UC. As she was beginning to adjust to this new way of working, was faced with a new challenge: a global pandemic.

In parts of 2020 and 2021, ACT school students transitioned to a period of remote learning due to COVID-19 restrictions. This meant that Alakiir, as the second oldest of her nine siblings, was now required to take on a greater responsibility in supporting her younger siblings’ education.

She stepped up to handle calls with their schools and assist with home learning wherever she could, all as she continued to balance her own studies.

“It was hard, but at the end of the day, we managed and got through it,” Alakiir said.

As the ACT moves towards adopting a ‘COVID normal’ way of living and restrictions continue to ease, many classes have returned to on-campus learning. Alakiir is excited to be back on campus and looking forward to undertaking her placement in Semester Two.

Alakiir is always looking to the future and what it might hold for her.

“My goals are to finish my nursing degree and to secure a job in the nursing industry. Maybe, then, I will go back home,” she says.

“We don’t have many nurses and training there. I would just love to work or volunteer, and maybe help with the training.”

Alakiir’s parents worked so hard to give her family a better life and to fulfill their hopes for their family, so for Alakiir to reach her potential, is a dream come true.

“With my refugee background, I never knew that I could come to school or continue with my studies. When I was in the camp, I couldn’t even think of finishing high school. It’s a major achievement for me that I’m here.”

This week, we are sharing the stories and achievements of UC community members who come from refugee backgrounds, to celebrate their successes and highlight different aspects of the refugee experience.

The University of Canberra is dedicated to equity, outreach and the support of all students at every stage of their education life cycle. Visit our website to learn more about our Student Equity and Participation programs.