When Zali McPherson started experiencing back pain in her first semester at the University of Canberra, she put it down to long hours studying at her desk.

Never in a million years did she think that at the age of 19, she would be diagnosed with lupus … a couple of months later, that’s exactly what happened.

Lupus is an autoimmune disease that occurs when the body’s immune system begins to attack its own tissues and organs. It can inflame the joints, skin, kidneys, blood cells, brain, heart and lungs, and is usually first diagnosed in young people between the ages of 15 to 45.

Zali’s back pain was the first symptom to appear, but it wasn’t the last. As the semester progressed, she began experiencing joint pain, brain fog, and her mental health declined as a result of the inflammation in her brain.

“It was a really bad time for me. I was struggling with anxiety and depression, and unfortunately lost a lot of friends,” Zali says. 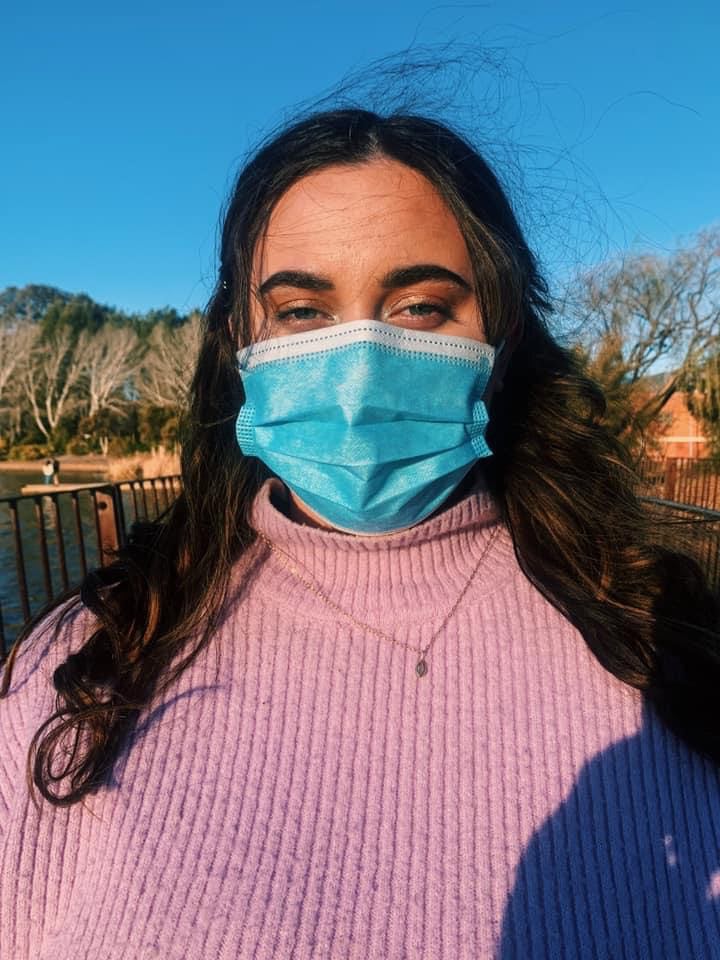 Luckily she found an incredible General Practitioner (GP) through the UC Medical and Counselling Centre, who cottoned on to her symptoms quickly. On average, it can take four to eight years for a lupus diagnosis to be made – for Zali, it came in a matter of months.

“Having a GP who is kind and understanding, and always listens to me without judgement has made such a difference in terms of getting treatment,” she says.

“He’s also created a network of my other specialists – physios and dieticians – to ensure I’m getting all-round care.”

Luckily, as a result of her GP’s quick thinking, many of Zali’s lupus symptoms have lessened, and from the outside, she could be perceived as completely fine.

It’s this belief that Zali struggles with the most.

“I have really struggled with telling people I have a disability, because people look at me with disbelief,” she says.

“Just because I don’t have a physical or intellectual disability doesn’t mean I don’t struggle.

“I’m taking medications every day, I’ve got to be hyper-aware of my organs, my immune system has tried to kill me. Just because it doesn’t look serious, doesn’t mean it isn’t.”

On 12 October, UC is recognising International Day of People with a Disability (IDPwD) by holding a panel event, which Zali will be a part of.

She says the decision to be involved was an easy one, because of her passion to share her story.

“I know I experience a lot of ableism, and I even have friends who still use the ‘R’ slur, so for me the day is about calling out those behaviours and bringing light to the struggles that people with a disability can face,” Zali says.

“People don’t choose their disabilities. Much of the time it’s something you’re born with – so I think it’s important to shed light on different disabilities and how they can appear, and make sure we’re a lot more inclusive.”

Through her journey, Zali has continued studying a Bachelor of Science (Statistics) degree and volunteers at the children’s ward of Canberra Hospital.

That volunteer work is something that has changed her entire perspective on life.

“It’s such rewarding work, and you just feel so good afterwards,” says Zali.

It’s not just through volunteering that Zali is thriving. Back on campus, she’s also Vice-President of UCSWIS [UC Supporting Women in STEM] – an inclusive student club aiming to provide a supportive and empowering environment to female students studying STEM courses.

“I’ve made so many friends through UCSWIS and they’re so understanding and supportive of everything I’ve got going on,” she says.

“I’m so glad I’m able to be part of such a great community. I’m so comfortable with the other girls in the club and really feel like I can tell them anything.”

Looking to the future, Zali hopes her degree will enable her to work in the public health space, with a focus on disease control.

For someone who simply thought she had a bit of back pain, Zali is certainly one to keep pushing boundaries, no matter the hardships she faces.

The International Day of People with Disability is held on 3 December every year.

UC is observing the day early this year, with an event on Tuesday 12 October.

Zali will feature in a You Can’t Ask That! Q&A panel discussion, which will be followed by a UC student guest speaker.

Find out more information about the event.