Just like that, we were – so neatly – wrapped in pink or blue boxes, our lives ribboning ahead down straight, binary-coded paths.

Only that’s not the reality for so many, who push their way up out of those boxes.

For Phil Pearson, the realisation that they belong somewhere “between or outside of” the binary gender structure is only about a year old.

“When that realisation comes, it’s as if you’ve been wearing the wrong-sized clothes your whole life – and finally, you’ve found the ones that fit,” said the University of Canberra HDR student, who is non-binary and whose pronouns are they/them.

Heading across a grassy expanse at UC, Phil’s earrings are swinging in a very strident breeze. They’re dangling black half-moons, fronted with a metallic teardrop – and threaded through a separate pair of black gauges. 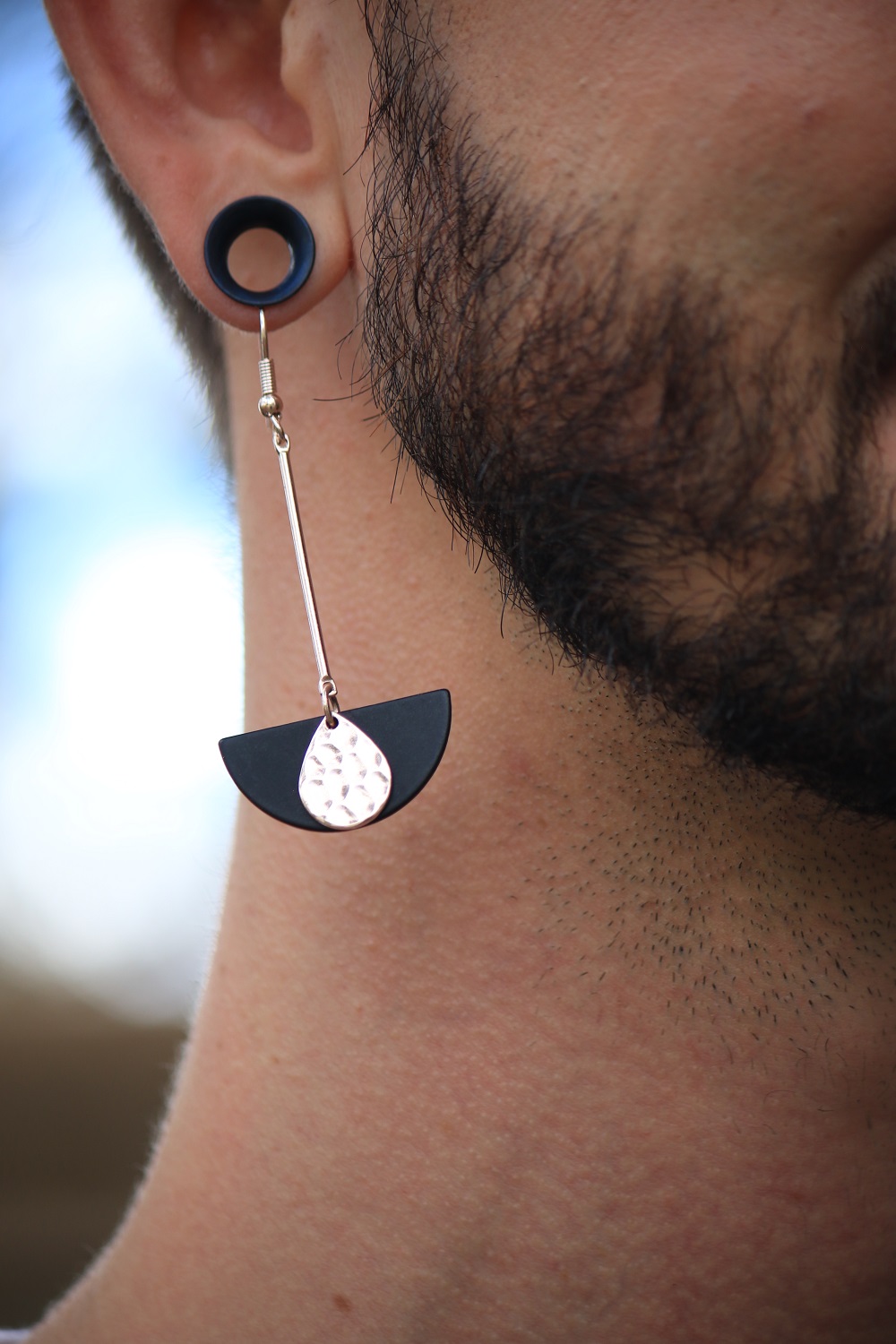 “I just saw these earrings and liked them, and I wanted to try them in combination with the gauges I already had, and see if they worked,” they said. “It was the same thing with my eyeliner – let’s just try it and see.”

That’s pretty much how it works with a journey to discover your identity sometimes, too – let’s see how this feels.

It isn’t long before Phil stops to enthusiastically point out frogspawn in a large puddle left by a driving, week-long rain.

“I took some home a few days ago, and they’re almost frogs now – I have always loved reptiles and amphibians!”

Together, earrings and amphibians diminish the power of old nursery rhymes a little more.

Phil was born in Red Bay – a small town in Alabama, in the United States, “named after red clay and bay trees”.

Growing up on a farm in the Bible Belt – with a religious family and conservative townsfolk – Phil often suppressed their gender expression, and conversations about sexuality and gender expression just didn’t happen.

“There was a bit of an ‘out of sight, out of mind’ feeling around it all,” they said. “But I have always been very close to my mom, and the fact that her sister – my aunt – is gay did help the conversation when it eventually happened.

“I first came out as bisexual, before deciding that ‘queer’ was a term that I felt more comfortable with – I just knew that I was attracted differently. I had also never felt like ‘one of the guys’, I don’t like sports or other typically [masculine] gendered things.”

While coming out wasn’t a huge ordeal for Phil, there was still an element of fear to it.

“I knew friends of mine who had been kicked out of their homes when they came out to their families,” they said. “There is always that fear there – but you know what? My family still love me. That’s all that matters.”

A lifelong nature lover, Phil’s area of interest and study has always been wildlife – from looking for frogs in the Tuskegee National Forest to searching for the breeding places of wild Bearded Dragons in the red dust of rural Queensland … or in the lab, determining the effects of season and temperature on lizards and their offspring.

“I was working as a lab manager after finishing my Master’s degree, when I met scientists on Twitter – they were coming to Alabama to look for frogs in the Tuskegee National Forest, and it turns out they had colleagues who were looking for an ecologist for a project here in Australia,” Phil said.

“I grew up watching Steve Irwin, and I had always wanted to study lizards in Australia, so I jumped at the chance, and here I am at UC!”

Phil’s PhD study at UC’s Centre for Conservation Ecology and Genomics, within the Institute for Applied Ecology, is focused on the nesting ecology and effects of incubation temperatures on Central Bearded Dragons, as part of the Sex in Dragons project. 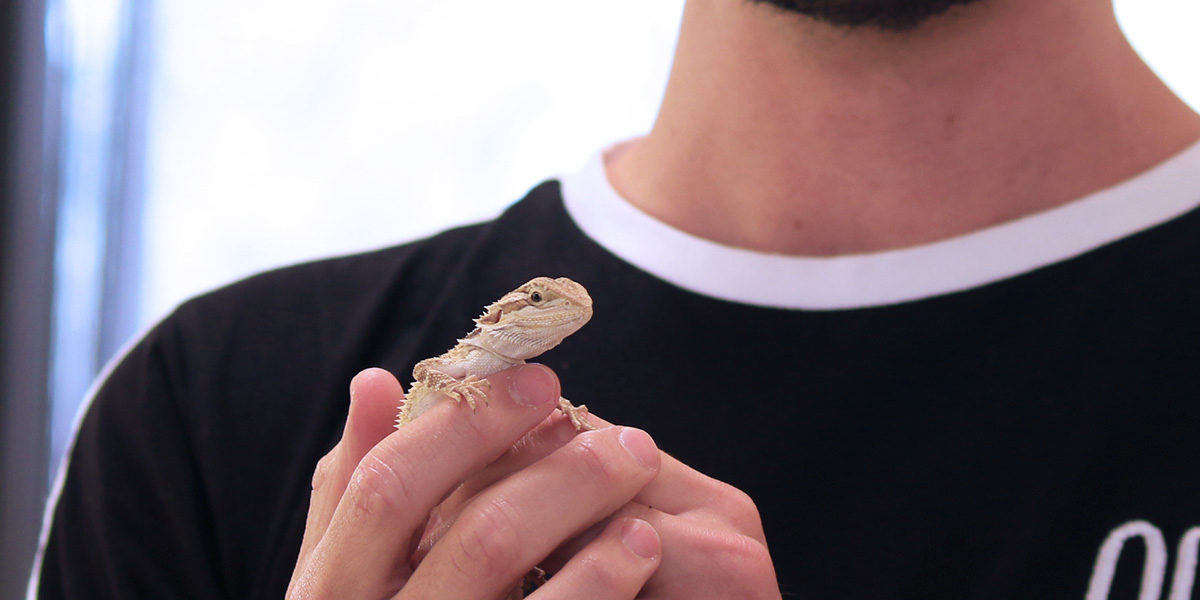 “Even in my area of study, sex is not binary,” Phil said. “In the bearded dragon populations, you have males, females, and sex-reversed females – which are genetically males, whose genotypes and phenotypes don’t match. My study is really providing fascinating insight because this phenomenon of three sexes occurs in wild populations.”

Such work takes them into rural communities on occasion.

“When I first got here, I spent six months in rural Queensland – and similar to back home, I do feel the pressure to ‘butch it up’ when I am in a more conservative community,” they said.

“So, when I am out in the field, I don’t wear earrings or makeup – not that you’d be able to tell, coated as I am in layers of sunscreen and dust! At any rate, I am still myself then – but ‘myself lite’, I guess.”

Phil says that nonetheless, they haven’t encountered much outright discrimination in Australia.

“Except for when my partner and I were refused a rental lease without our references even being checked and were later told by someone else that the owners preferred a more ‘traditional’ couple,” they said.

Mostly though, Phil is heartened by the people who ask them respectful questions, because they really want to learn more about gender diversity. Using the right pronouns is a small – and very important – thing that everyone can do.

“Those who apologise and correct themselves when they get my pronouns wrong, for instance – that really gives me hope,” they said.

If you ask Phil what they are proudest of, it is simply: being here, who and where they are right now.

“I have major depressive disorder and an anxiety disorder, so there have been a lot of ups and downs, and major mental health battles,” they said. “I know that struggling with my gender identity and sexual orientation has played a role in that – there was a point that not accepting myself for who I am really sent me into a spiral.

“That’s why making it this far, getting accepted into a PhD program, and most of all, just being my authentic self, means so much to me.

“It’s been a bit of a journey, trying to find acceptance of myself. It took a while … and it’s still going.”

On 31 March, Transgender Day of Visibility is observed internationally, to celebrate the achievement and contributions of transgender and gender diverse people, and to raise awareness of the discrimination they face.

Words and photos by Suzanne Lazaroo.