In a world dealing with an ongoing pandemic, keeping your community safe often means staying apart from it – but the need for human connection remains, perhaps even magnified in the face of fear, uncertainty and isolation.

In that very same world, technology is progressing at blink-and-you’ll-miss-it speeds – the Internet of Things (IoT) – which sees everyday objects embedded with the capability to send and receive data – is ever-growing, and self-driving cars are undergoing on-road trials.

A major stumbling block in both cases? Connectivity that just can’t keep up.

“There has always been a demand for higher data rates, and greater connectivity – and that has never been more important than it is now,” says Alex Okon, a PhD candidate at the University of Canberra.

“The demand for connectivity is increasingly fuelled by people indoors – and mobile towers are not designed to provide optimum connectivity indoors.”

Even outdoors, you get signal dropouts as you move from place to place.

“It’s not just an issue of convenience, but one of safety – take self-driving cars, for instance. Safety depends on the latency of their system responses, which means optimum responsiveness is needed.” 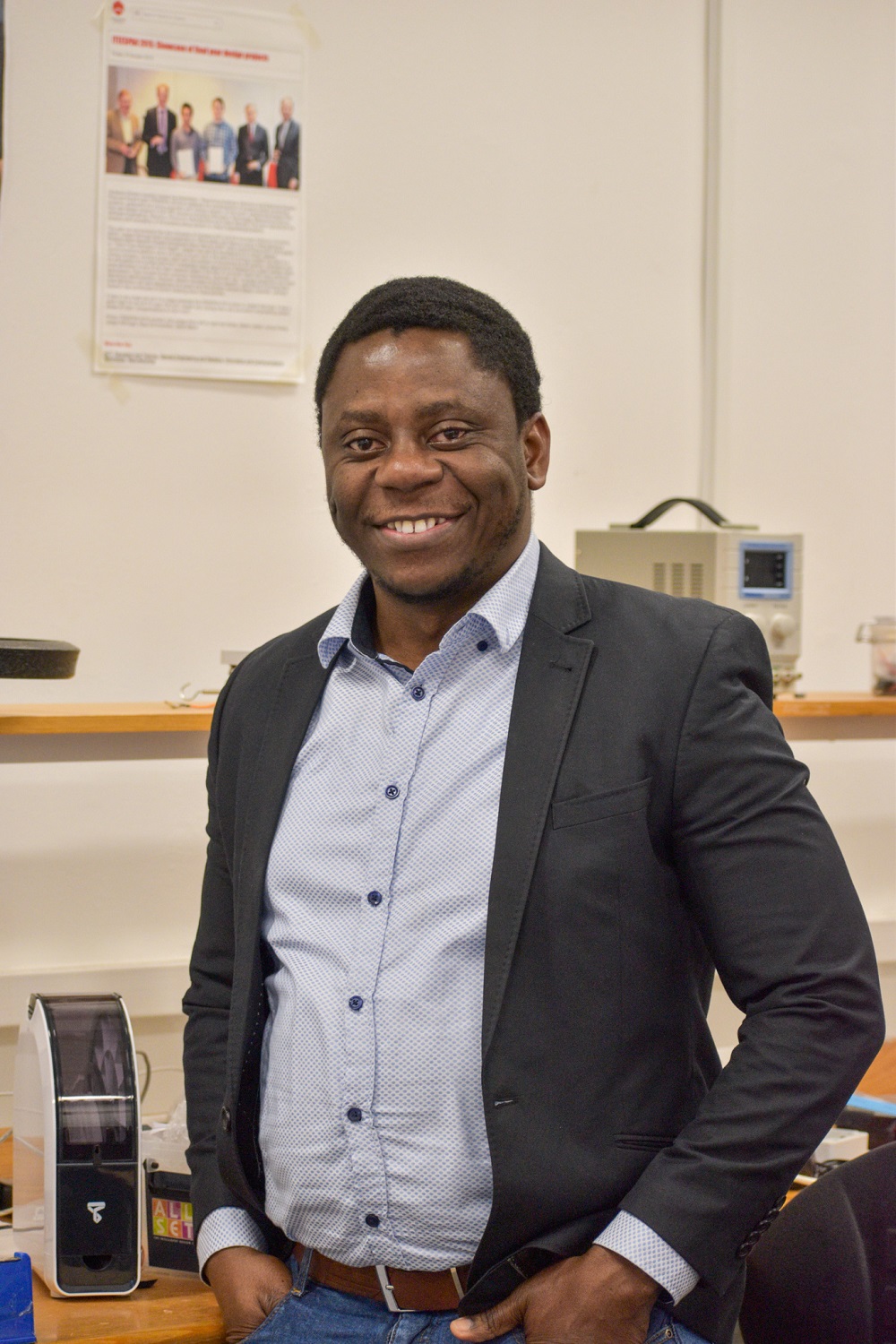 Alex has dedicated his research to solving the problem, and enabling high speed signal deployment. To this end, he is working with researchers from the University of Sydney, and the University of Leeds in England.

Originally from Nigeria, he spent 10 years as a research engineer, before moving to Australia in 2017. In 2019, Alex embarked on his PhD at UC.

“I was drawn to UC because of its fantastic reputation, especially for strong collaborations with industry,” he says.

“And I have received really tremendous support from my supervisors – Dr Ibrahim Elgendi, Lecturer in IT and Systems, and Associate Professor Dr Kumudu Munasinghe, who is the Head of School, Information Systems and Technology at the Faculty of Science and Technology.

“I have always been driven by curiosity, by my need to investigate problems and find solutions – and of course as a mobile user, I understand the frustration of poor network coverage only too well.

“This research is also very timely because of the increased development of 5G technology as a new global wireless standard. While data speeds in 5G networks are much higher, coverage is still limited.”

And, Alex says, there is even talk of 6G technology in the not-too-far future, driving artificial intelligence and a fully-connected digital society.

It’s an issue of huge contemporary relevance. And one illustration of its importance is that in the first year of his PhD, Alex had two papers accepted for publication in Quartile 1 journals – within the same week.

A large part of the reason for dropped signals and low connectivity is the lack of technical and business cooperation among operators – so if you’re out of the coverage area of your own operator, you’re also out of luck.

Alex’s research aims to solve that problem by allowing users to seamlessly roam and transfer between networks.

“This solution makes use of software-defined networks to help in the management of networks, as well as blockchain technology for managing agreements between operators – which allows for the transfer of subscribers across operators,” he says. “The blockchain technology employs smart contracts to make the whole process transparent, so that any updates are automatically updated across all parties to the agreements.”

It’s an elegant, streamlined solution, one made even better by the fact that end users don’t have to do anything to enjoy its advantages – the prerogative for adoption lies with operators.

“In a way, this will bring a new level of dynamism to network environments, with greater collaboration and cooperation among operators – that is what it will take, because the spectrum is limited and must be optimised via the sharing of radio frequency, which also makes it easier for regulations to monitor usage,” Alex says.

The solution he proposes is a win-win for operators, who will be able to extend the reach of their footprint. It means they won’t have to worry about losing revenue because they are losing customers, who may face connectivity problems with a particular network.

With Alex having devised the architecture for the solution, he is now investigating how to optimise resource sharing and how to make the best use of the spectrum, as well as exploring various cyber security issues to defend networks against malicious attacks.

“Among the things we are looking at is whether an optimisation algorithm can determine where the demands on a network are and the optimum placement of nodes, as well as how the network can reconfigure itself to handle those demands,” he says.

In addition to his PhD research focus, Alex is embarking on a three-month project with Cingulan Space to develop a cloud-based software defined radio testbed that could change the way satellites are controlled. Read more in News.

UC a buzzing hub of sustainability

A series of bee hotels have been erected around the University of Canberra grounds, in another step towards its goal of becoming a sustainable campus.

Building a better future for women in construction

UC Bachelor of Building and Construction student Ashleigh Johnston was awarded the NAWIC Award for Student of the Year in 2020. She shares her inspirational story.