When Sarah Fisher talks about the weather, it’s as far from small talk as imaginably possible.

The warm, calm conditions of a hot summer’s day, that start with a high-pressure system … and then, with a change in pressure, turn into a thunderstorm – the weather is an endless source of fascination for Sarah, and she sparkles when she speaks of its mysteries and machinations.

“The weather is a point of connection for every single person on earth – no matter who we are, or where we live, we are somehow affected by the weather,” says Sarah, who has just graduated with a Bachelor of Applied Science (Honours) from the University of Canberra.

As a child growing up in Yass, she loved trying to figure out the secrets of weather and climate.

“I used to draw on the walls in red and blue chalk, trying to work out how we got warm days, or cold weather,” Sarah says.

Little wonder that when it came time to choose a path in university study, it was the Bachelor of Environmental Science, and then honours in Applied Science that caught and held her attention.

“I wanted to spend my time doing what I loved, every day,” says Sarah, who also received a scholarship from the Country Education Foundation for her undergraduate study. 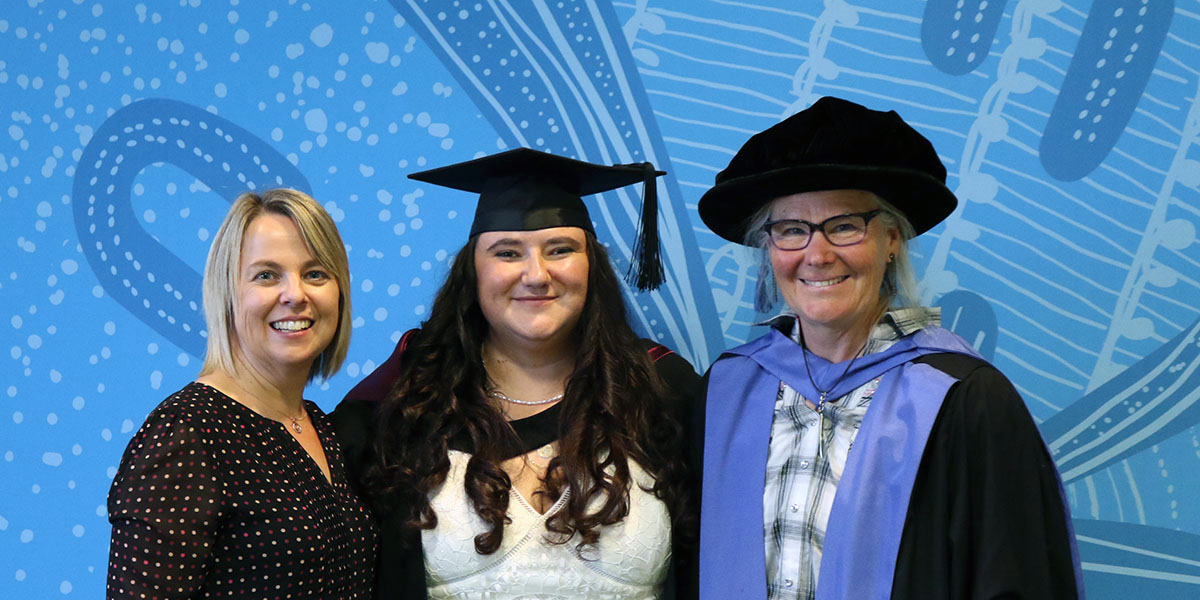 A project that began in Sarah’s undergraduate study grew into her honours thesis, as she looked at how weather systems were affecting Azorella macquariensis, a plant native to UNESCO World Heritage Site Macquarie Island, located halfway between New Zealand and Antarctica.

“In 2008, a critical dieback event occurred on the island, causing about 88 per cent of sites of the Azorella Macquariensis to be affected,” Sarah says.

“Because predators were eradicated from Macquarie Island in 2012, the cause was unknown. We decided to look at what was happening in the weather and weather systems themselves, the interactions between the high-pressure and low-pressure systems, and how that might have impacted the plants.”

Sarah and the project team developed a system of synoptic typing using hand-drawn charts; synoptic typing creates a way to statically examine synoptic charts, turning the visual synoptic pressure charts into data. This allows large-scale atmospheric patterns to be analysed and then related to other data from the sites.

“We ended up analysing 2,509 synoptic charts – and ultimately did find a potential cause for the plants to die back,” Sarah says. Their results will be published in coming months.

“Over the last year, I also found out more about my Indigenous heritage,” Sarah says. “And these learnings have made me feel even more connected to the environment.”

Sarah’s family didn’t always know that they had Indigenous heritage in their ancestry, because her great-grandparents were affected by the Stolen Generations. After doing some research, they discovered the hidden part of their heritage.

“My grandparents did some research in the last year, and found out we have heritage to the Wiradjuri tribe,” Sarah says. “So now I can claim that identity on behalf of my great-grandparents – but nothing is ever going to make up for the heritage they had to hide.”

But this isn’t just a straightforward story of someone pursuing her passion. Sarah’s journey has been hallmarked by extraordinary resilience and strength, woven throughout with a can-do spark and the bright thread of enquiry, curiosity and love of learning that drives her.

She lives with a host of health conditions – brittle bone disease (osteogenesis imperfecta), “which basically means that I can break a bone by writing too hard with a pen,” she says; epilepsy; obsessive compulsive disorder; and severe dyslexia.

“I began my undergraduate studies in 2010, and because of all my health issues, it took me more time than most people to get here [graduation],” she says. “The epilepsy developed while I was doing my undergrad studies, and because it seems to be triggered by stress, I would ask for more time for assignments, so that I could complete them without triggering a fit.

“Partway through my Honours, I also developed a hernia. I was bleeding internally, and had to take a year off to get treatment.”

Her health issues meant that Sarah had to put various coping strategies in place to make sure she could focus on her studies, follow her weather dreams, and live a full life, while dealing with multiple serious health issues.

To that end, she’s grateful for the constant, dedicated support she received from UC’s Inclusion and Engagement (I&E) and Study Skills teams, as well as the doctors and nurses at the Medical and Counselling Centre.

Sarah’s dyslexia was also re-diagnosed while she was at UC, when she visited the student-led Psychology clinic – having an updated diagnosis enabled measures to be put in place to support her learning.

“I met with the Study Skills team every week,” Sarah says. “They would go over my assignments with me. Dyslexia affects everyone differently – for me, it affects my reading and how I process information, as well as my spelling. So I would have paragraphs written in my head, but getting them down in writing was difficult.

“The Study Skills team would go through my assignments with me, discuss the key points I wanted to make and check my spelling, etc.”

Sarah says that I&E and Study Skills formed a real support system for her – including when she needed someone to tell her to slow down.

“Very often, I have a tendency to just push through when I am ill,” she says. “Including when I had the hernia. And one day, I went to see I&E, and they said, ‘ok, you are now whiter than the table you’re sitting at, and you need to take a break’ – and I realised I had to take the time off to get better.”

Living with dyslexia meant that submitting a traditional thesis wasn’t a practical option for Sarah – so she became the first student at UC to submit a video thesis.

“As far as we know, it’s the first time a video thesis has been done here – the Faculty put in a lot of time and effort to make that possible, and hopefully it will also be an available option for future students,” she says. “My thesis is structured like a lecture series, combining video and PowerPoint presentations – so that instead of spending hours struggling to type out paragraphs, I could talk through my points.

“Also, the methods and results in the project were interwoven, and we were able to reflect that in a video in a way that I would not have been able to do with a traditional thesis.”

Sarah recommends that anyone with dyslexia who wants to attend university should request the necessary modifications when they apply to study.

“That way, everything can be put in place in time for you to start,” she says. “UC provided the software I needed when I started, but today you can use an app like OneNote Learning Tools as well.

“I’m about to begin a mentorship program, under which I meet up with an industry mentor to learn about things like interview skills, networking.

One of Sarah’s greatest hopes is that in sharing her story, other people facing challenges may know that their dreams are within reach, with a little help.

“I really hope that the modifications we worked on with the I&E team, Study Skills and the Faculty will also prove useful for others – I really want everyone to know it’s possible!”

She also thinks it’s important to remember that what works for one person might not work for another. “I took four years for my honours – including the year I had to take off to recover – and I think that challenges the notion that an Honours must be done in the usual nine months.”

It’s getting it done that matters more than how long it takes, Sarah feels.

“I would like to work with synoptic typing and how that impacts Indigenous weather knowledge,” she says.

Sarah has been through such a journey on the road to her degree – and her all-weather love burns as brightly as it ever did for the curious child she was, drawing on walls to figure out mysteries.

And what is she proudest of?

“Finding out what could have happened on Macquarie Island!”