You may not know his face, but you’ll definitely know his name. For the last quarter of a decade Leonardo Difronzo has been cutting and styling the hair of the University of Canberra community, as well as providing body piercings at Leonardo’s Uni Salon in The Hub.

Walking into Leo’s no-frills salon, you can expect to be greeted with a friendly smile and a big “G’day” – familiar to anyone who has walked through the doors in the last 25 years. He is known around campus for his friendly and welcoming demeanor, and once you enter the salon, it doesn’t matter what you do - whether you’re the Vice-Chancellor or an average Joe – everyone is equal.

After applying for a job at the salon through the then-UCU in 1994, Leo began his time working there during the era of flared jeans, Walkmans, and Nirvana. He had just completed his apprenticeship, aged 24, and he had little idea that his first hairdressing job would turn into a career, and a salon of his own.

While those days seem like a world away, Leo’s passion hasn’t wavered. He’s more excited now than ever about coming to work each day and spending time with his regulars – some of whom have been using his services since day one.

“My favourite part of the job is the creativity and the freedom I have in terms of what I can do with hairdressing and body piercing,” Leo said.

“I do have a lot of regulars that come in and I always enjoy catching up with what’s going on in their lives. I really do care about my customers."

“It’s always a bit of a buzz looking after people who are Australian athletes or play for the Canberra rugby teams!”

For Leo, having his salon based on campus at UC is the perfect fit. He isn’t hung up on having a fancy or snobby salon – he just provides friendly, honest service.

“The atmosphere around campus is very relaxed, and that’s how I like to keep the shop too,” he said.

“I’m very set on keeping the original relaxed vibe that’s been working for me all these years. And if that didn’t work, I wouldn’t still be here and in business.”

And relaxed it is. Throughout the day, Leo sees many people – customers or not – wander into the shop to say hello and check in on what he’s up to. They’re not necessarily there for a haircut or service, they’re coming to check in, share a smile and enjoy Leo’s company.

A typical day in Leonardo’s salon isn’t, in fact, all that typical.

“My day is generally full of people coming in and out and saying G’day. I might be biased but UC is full of lovely people, and it’s why I’ve stayed here.”

“I also learn so much from the community here. UC is so diverse – there are so many international students and staff with different backgrounds. It’s a pleasure to have learnt so much from them.” 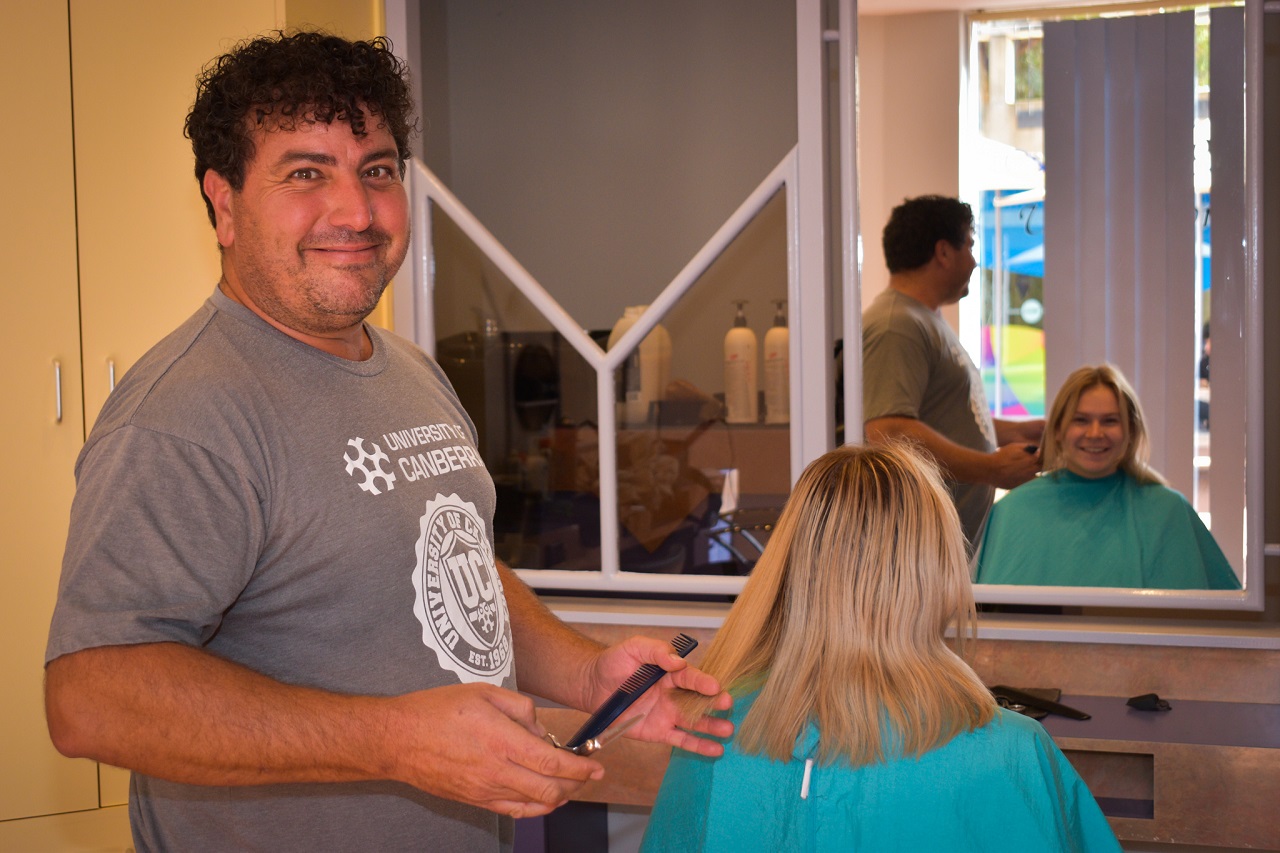 The relationships he’s built are the greatest outcome from his time here, Leo says. Because of the length of his service, these span generations.

“I’ve had clients who have met at UC, gotten married, had kids – and now those kids are beginning to come through as students! I truly feel like I am a part of their families,” he said.

“It’s a strange feeling when they’ve come here for their first haircuts as a baby and now they’re coming in between classes – it does make me feel old, but also really privileged.”

“Not only that, but I really am part of the UC family. It can’t get much better than that – not for all the money in the world.”

Of course, plenty has changed on campus since 1994. According to Leo, most changes have been really positive. He’s seen a lot of growth – both in the number of students on campus and the physical expansion of the buildings and spaces.

In Leo’s eyes, the addition of new restaurants and cafes is one of the most significant changes.

“They’re creating a new vibe on campus and a real community feel. It’s a good match with the educational offerings here,” he said.

“Not only have we grown physically but I’ve also watched the uni rise significantly in the world rankings, and I can see that’s due to a lot of hard work from a lot of good people.”

“I’m the longest running tenant on campus, so I do think it is quite a pleasure to have been able to watch all the incredible things the uni is doing.”

The title of longest-serving tenant does come with a hint of sadness though. Leo has seen many of the salon’s customers and neighbours, move on.

“The one thing that I’ve had to deal with personally is the transient nature of a university. Lots of people come for a three- or four-year degree and then move on again,” he said.

“I’ve had to learn to say goodbye, which sucks. I tend to get a little bit sad when that happens – but people move on and that’s life.”

Lucky for the UC community, we won’t have to say goodbye to Leo any time soon. It seems 25 years isn’t quite enough time yet.

“The university has been so loyal to me. Not many places have that anymore, but UC has given me a great opportunity to be here, so I appreciate that,” he said.

“I’ll give it at least another decade!”

What makes Canberra such a liveable, lovable city? Urban planner Dr Sajeda Tuli created a knowledge cities index from 25 Australian cities. The Bush Capital was #3. Now, the 2019 Fulbright Scholar is going to gain knowledge from the US to see how we compare on an international scale.