Calm of vibe and multi-hued of hair, Alicia Bird’s whole career has been a love letter to the elderly, as a nurse determined to advocate for end-of-life care that is respectful, dignified and informed.

It’s a missive she began at the University of Canberra as a student nurse … and she’s writing more chapters now, a decade after she graduated in 2009, as a member of UC’s academic staff and a PhD student. 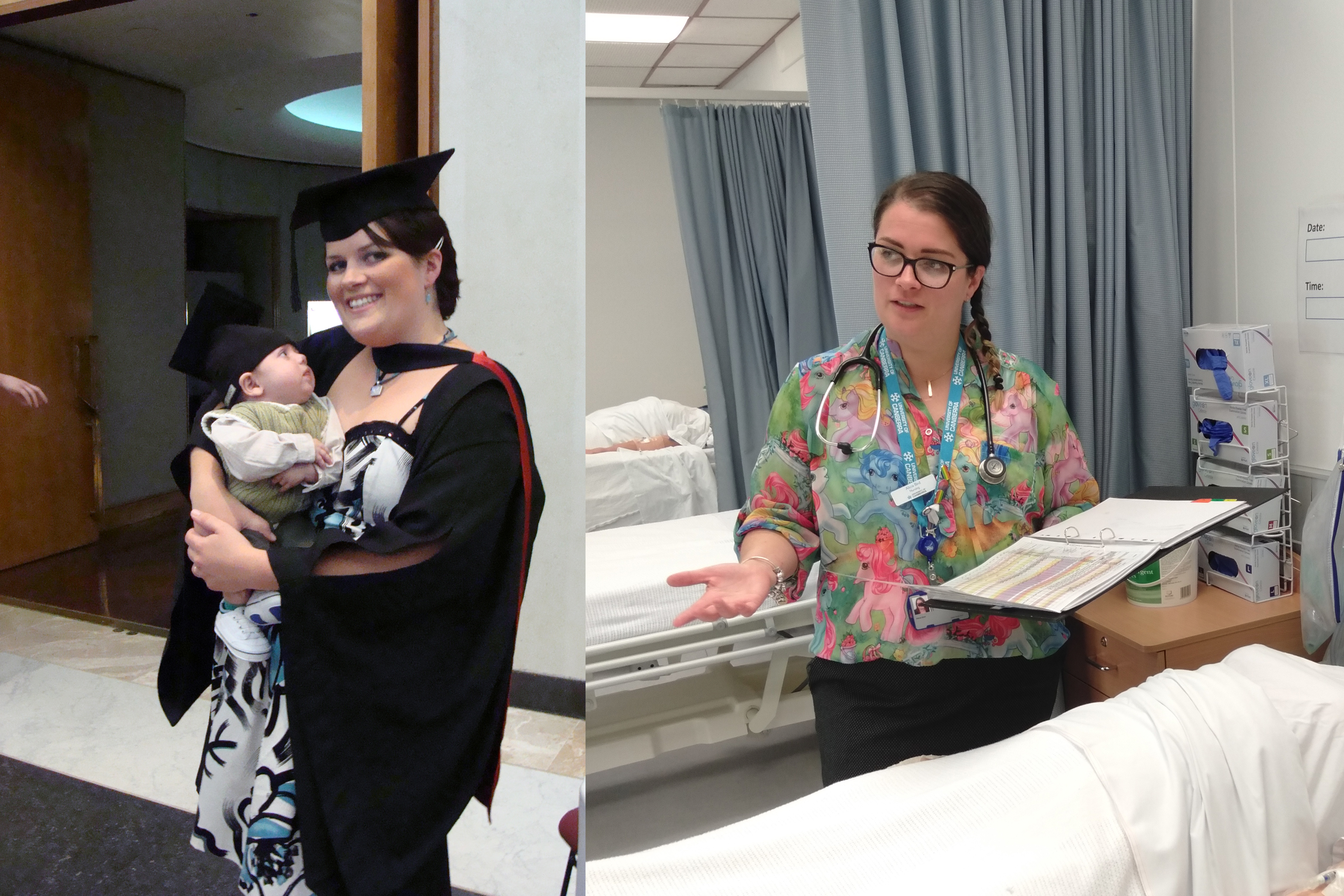 “When I did my final placement for my Nursing degree, I just fell in love with looking after older people,” Alicia said.

Looking after her charges, she found herself invited into their lives, a myriad different worlds. The stories they told, and the connections she made with them, changed her forever.

“Older people have lived vast lives, done amazing things,” Alicia said. Whether they’ve contributed to their own small community, or on a national level, she finds their lived experiences fascinating.

Love has greater meaning when it is shared, and so from administering care, Alicia decided to become a lecturer in the subject.

“It is just one avenue open to you as a nurse, among others like academia and research,” she said. “For my PhD, I’ll be looking at the acceptance of the LGBTI+ community in residential aged care in Australia. I’m hoping to discuss the concerns and hopes of the community relating to entering care.

“I like teaching, because it gives you a chance to share your passion – and nurses are passionate people,” she said.

They have to be. This is not a vocation for the faint-hearted. And it requires both empathy and knowledge.

“I want to make sure that nurses are going out there with an understanding of the older person,” she said. “It’s important to understand them as a whole person, and not just look at what’s physically ailing them.”

This isn’t just an emotional response. “There’s a psychosocial side to ageing and illness, as much as there is a physical one, and understanding that is crucial to providing effective care,” she said.

Her career path today seems quite far away from her adolescence in the small country town of Yass, when university wasn’t even part of the plan – “I didn’t think I was ‘smart’ enough,” Alicia said.

But then in 2006, her beloved grandmother became ill. “My grandmother and I were really close, she was such a powerful figure to me,” Alicia said.

In the last stages of her grandmother’s journey on earth, palliative care nurses became pillars not only for her, but for Alicia and the rest of the family.

“The support they gave all of us was amazing,” said Alicia. “They provided physical and emotional care for my grandmother, calmed the rest of us, and helped us prepare for our impending loss.”

“In the end, they gave my grandmother a good death … what more can you ask for, at the end.”

They sparked Alicia’s own vocation to life … “and so I found myself here at UC, at the ripe old age of 21,” she said.

In the third year of her Nursing degree, Alicia gained another great love – she gave birth to her son, Hamish.

“I used to bring my son to class with me – I mean, I was bringing him to a class of would-be nurses, so everyone would help take care of him!” she said. “Being given the final placement back in my home town of Yass took a weight off my shoulders, because my family was able to care for Hamish.”

“The whole experience of becoming a nurse here at UC was so overwhelmingly positive. I guess that’s why I am here again now.”

Alicia has come full circle, and is passing on the torch of her passion for people to her students – making sure they have the skills they need to make that passion meaningful.