David has seen a lot of change at the University of Canberra. Over 40 years, he has been a student, adjunct, industry partner and staff member, all of which has contributed to UC’s sport and exercise research capability.

His commitment and contributions have been recognised by UC, as one of the inductees to the Sports Walk of Fame, which acknowledges the achievements of distinguished alumni in sport and the sport industry.

“I’ve known Graffy [Carrie Graf] for some time. She called me one day to say she wanted to include me in the inaugural round of inductees for the Walk of Fame,” David says.

“I think of this honour more as a testament to UC’s sport foundations and good people than as an individual achievement.”

David’s journey with UC began in the early 1980s. Having a passion for and interest in sport, he enrolled in the Canberra College of Advanced Education’s (CCAE) University’s   second intake for the Bachelor of Applied Science in Sports Studies  , specialising in Sports Coaching, in 1982. The CCAE had just started developing its sports  with the Centre for Sports Studies being established to support the growing industry and professionalism of sport. The CCAE later the University of Canberra in 1990 and continues to develop its sports program.

Back then, the commercialisation of sport was just starting, with corporations beginning to back teams and the Australian Institute of Sport (AIS) opening in Canberra in 1981. Canberra became the home of elite sport for the nation, and the CCAE saw an opportunity to partner with the AIS and ACT Academy of Sport (ACTAS) to play a leading role in the development of Australia’s sporting industry, which continues today.

“There weren’t as many career opportunities in sport at the time – it has since become more organised and professional."

"But UC made a commitment to the sports program back then and the commitment to that vision has paid dividends for the University and sport sector, locally and nationally. There are a lot of careers in sport now,” he says.

Roles such as Sports Scientist, Exercise Physiologist, Strength and Conditioning Coach, Communications and Digital Producer, Partnerships Manager, Data Analyst were not available in the 1980s – today, they’re in high demand, along with sport and exercise-related research and more. There will be abundant opportunities for the sporting community as we enter the golden decade leading up to the 2032 Olympics in Brisbane.

Excitingly, all nine UC sports PhD graduates in 2022 have already found employment in the sporting or higher education sectors.

UC offers a variety of undergraduate and postgraduate degrees and certificates, with 12 new PhD scholarships partnered with industry focusing on promoting women in sport, underpinned by UC’s 2021-2026 Sport Strategy.

“Bricks and mortar change, the way teaching is delivered continues to evolve, but the principle of UC’s sports program has remained the same. The original purpose of developing new scientists, researchers, academics, administrators and sporting officials, as well as new knowledge and innovation, is still being served,” David says. 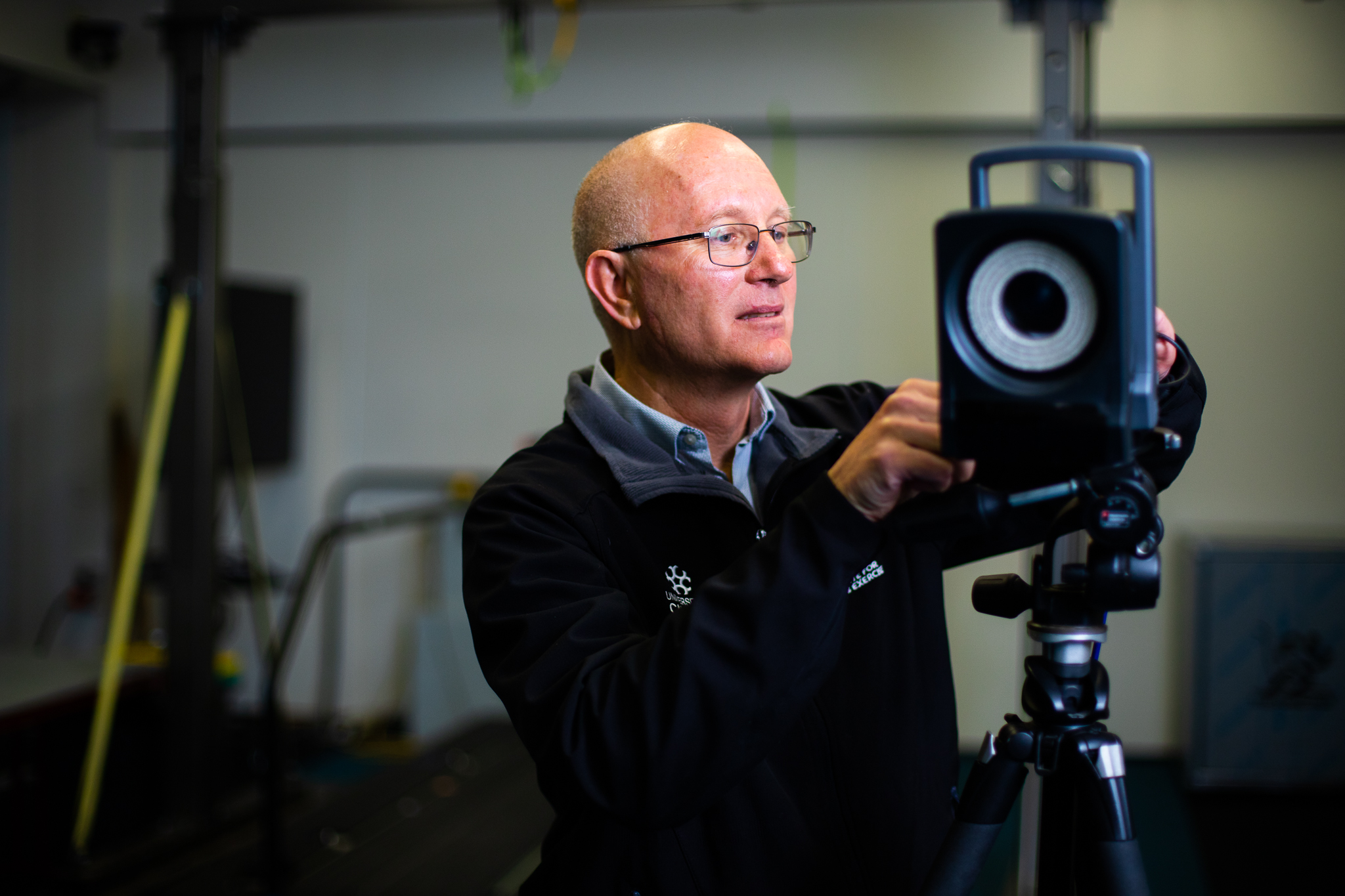 After his undergraduate degree, David was also in one of the first intakes for the Master of Applied Science in Sports Studies, which he completed in 1986. Developed as part of UC’s growing focus on sport, the degree was sport-focused but engaged local community. A highlight for him was trying a variety of sports he’d never really spent much time around, such as tennis, basketball and swimming, which he would work with later in his career.

After completing his master’s degree, David worked at the AIS as a sports physiologist and researcher for 30 years, where he worked with the Australian Swimming Team across four Olympic Games and multiple major competitions (plus many other sports and teams). In parallel, he provided industry and research expertise to the University as an adjunct. Bringing industry knowledge and experience, he contributed to various research projects, including exercise immunology, athlete health, and sport performance, and was an industry supervisor for a variety of honours students.

“I supervised students alongside Dr Peggy Horn and others. The opportunity to teach, share knowledge and support young researchers was a rewarding experience which I enjoyed,” David says.

He said it is privilege to be working alongside such luminaries as Professor Dick Telford and Professor Allan Hahn, who are still actively involved at UC after all these years.

David completed his PhD in Biochemistry and Molecular Biology at the Australian National University (ANU) in the early 1990s, while working at the AIS. He has also served as an adjunct for ANU.

He became more involved with UC after the Research Institute of Sport and Exercise (UCRISE) was established in 2014. He moved to a 50:50 conjoint role with the AIS and UC, which allowed him to work on the frontline of sport at the Institute while undertaking industry-leading research at the University.

In September 2021, David was appointed the Director of UCRISE, but he won’t indulge in too much celebration.

“Progressing from a student in the back of the class to leading UCRISE is pretty cool,” David says.

Now, it’s all about helping UCRISE and the University to continue delivering high quality research. David contributes to a broad portfolio of work within the Institute; delivers guest lectures, workshops and tutorials to share his wisdom with students; and contributes to wider learning and teaching activities.

He is the Chairperson of the Animal Ethics Committee at UC until the end of the year, supporting research activities in the Faculty of Science and Technology, research integrity office, ACT Government, and other stakeholders.

Reflecting on his successful career to date, David believes it’s been his work ethic and great colleagues that have led to this recognition.

“I’ve always had a high work ethic, but not necessarily the ambition to achieve specific goals in my career. I’ve just wanted to work with good people, align with great programs, and contribute to a positive shared journey or experience,” he says.

“My goals aren’t around my career anymore, it’s more about helping other people achieve their goals. It will be nice to see this plaque as I walk to the next meeting or get my coffee – but for me, it’s more about the people here, and continuing a legacy that began a long time ago.”

David says it’s UC’s history and commitment to sport and the fantastic people that set it up well for what’s to come.

“There are really good things coming, but it’s a long journey so you have to be patient, while being in the here and now. Everything takes time and attention."

David is one of 22 alumni inducted into the University of Canberra’s new Sports Walk of Fame, with plaques installed along the bridge between the Refectory and Sports Hall. Inductees include UC alumni who have contributed to sport and the industry as athletes, sports administrators, officials or coaches.

“David’s commitment and contribution to UC has been remarkable – over 40 years as a student, adjunct, researcher and professor, he has played a leading role in upholding the University’s mission to becoming Australia’s leading university for sport education and research,” says Carrie, who is UC Director of Sport.

“This honour is well-deserved, recognising his invaluable contributions, experience and leadership in sport research and the industry.”

Professor David Pyne is one of 22 alumni being inducted in the University of Canberra’s new Sports Walk of Fame, with plaques installed along the bridge between the Refectory and Sports Hall. Inductees include UC alumni who have contributed to sport and the industry as athletes, sports administrators, officials or coaches.

Putting engineering to work in service to the community

Award-winning engineer and emerging leader in the Australian tech sector, Bryce Cronin’s passion for harnessing technology for social good has seen him impact many – this year, he’s a finalist for the Chancellor’s Rising Star Award at the University of Canberra’s Distinguished Alumni Awards.