Acclaimed Australian producer Sue Maslin vividly remembers the day, 35 years ago, when she literally stumbled across a course that proved to be life changing.

As a 25-year-old, Sue had completed a Bachelor of Science degree at ANU and started a year in Honours in Zoology when, on the spur of the moment, she decided to walk around the Canberra College of Advanced Education (CCAE) now the campus of the University of Canberra to see what courses were on offer.

“I wanted to find out more about the world,” Sue said.

By chance, Sue parked her car next to Building 9, which just happened to house the Media Studies Faculty. “I drawn in by the hallways lined with film posters.” 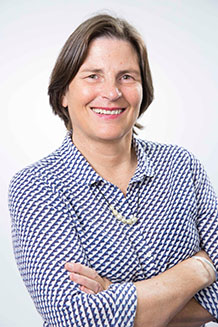 Her exposure to media at that time in her life was as part of the Women’s Broadcasting Collective on community radio station 2XX. But she felt she had found her calling.

Sue applied for the course as one of four full-time students. Despite no prior experience nor interest in the art of filmmaking, she was accepted into the course.

The course was the turning point of her life. With a focus on film history and theory ahead of practice, Sue learned from the outset to speak the so-called shared language with filmmakers.

“From the moment I started the course it became all-consuming. There was little time for anything else,” she said.

It was during her time at CCAE that she met Daryl Dellora, her business partner for the past 35 years.

At the completion of the year-long course in 1983, Sue’s career path into filmmaking hinged on securing equipment. This was no easy task in the early 1980s!

She gained access to the CCAE cameras and editing suites by becoming a part-time tutor in Media Studies, a position she held for two years.

During this time Sue made around 20 short films, documentaries and music videos.

She was now armed and ready to conquer the world. “I was determined to tell women’s stories in my films.”

Her first was Thanks Girls and Goodbye released in 1988. The film told the story about women working on farms in Australia, effectively replacing the men who were serving in the Second World War.

A number of films followed including Japanese Story and the Road to Nhill before she decided to adapt The Dressmaker, the best-selling book by Rosalie Ham, to the screen. Sue faced a battle with film financiers who believed it was too heavily skewed to females.

“There was a feeling that it needed to have ‘A List’ male stars to be successful,” she said.

Sue persisted with her original cast for The Dressmaker led by powerful female stars Kate Winslet and Judy Davis. The film went on to become one of the highest grossing Australian films of all time.

“I think the most important lesson I have carried with me since my CCAE days is the art of collaboration, it has given me a deep appreciation of the craft of filmmaking,” Sue said.

“I am determined to make sure that the next generation of film makers receive the same training I received so I continue to combine film making with teaching.”

Sue was recognised with an Officer of the Order (AO) in the Australia Day honours for her role in film production in Australia and the part she has played in increasing the participation of women in the industry.

But Sue’s thoughts are never far from her next production. She is currently working with renowned Australian director Jocelyn Moorehouse on a film depiction of the life of the German musician and composer Clara Schumann entitled The Variations.

“I am committed to telling stories about women that haven’t been told before. And there are plenty of stories still to be told,” concluded Sue.