Cathy Hope’s Streetwise Project gives older artists a chance to spray paint the streets – and is a joyful testament to the power of play, at every stage of our lives.

It’s amazing what a can of spray paint can do – wielded correctly, it can battle ageism, forge connections and bust stereotypes wide open.

And it can certainly tint the concept of ageing in very different hues.

"Each budding street artist is over 55, and they enjoyed themselves so much that they’re joking about being in a 'gang', and looking for sponsorship for jackets with the legends 'Silver Sprayers' emblazoned on them!" said Dr Cathy Hope, Assistant Professor of Communication at the University of Canberra’s Faculty of Arts and Design. 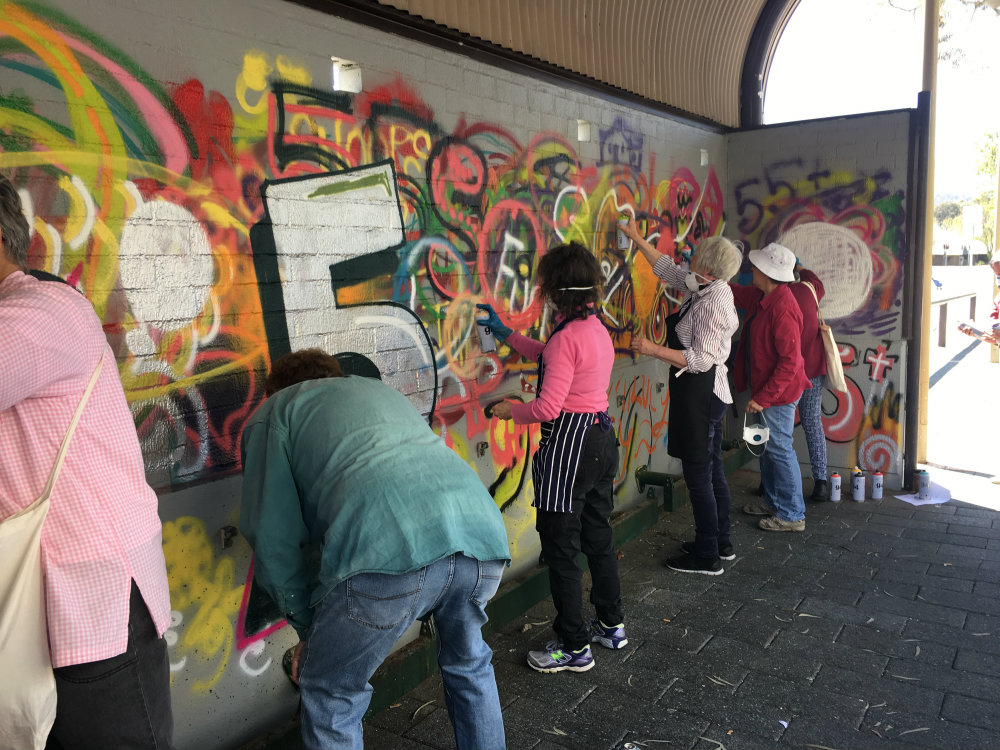 Cathy initiated and coordinated the project under the University’s Play Activation Network, working with Transport Canberra and City Services and Westfield Woden to bring it to kaleidoscopic reality.

It’s a tendril of her core research, which explores the role of play as a cultural, lived experience which is both inclusive and progressive.

"Here in Australia, we have an ageing population living in an ageist society," she said. "It’s imperative to find ways to combat ageism and reduce stereotypes."

At the same time, studies suggest that intergenerational interaction is good for the health and well-being of the elderly. It decreases isolation, drawing older adults to be more integrated into society.

The Streetwise Project addresses both those prongs of thought; its initial incarnation brought older adults together with younger street artists Dai Cameron and Ben Reeve. The results pretty much blew everyone’s minds.

"Dai said that he had been expecting some hesitation from these older people, but they were just raring to get a can of paint and have a go at the walls!" Cathy said. 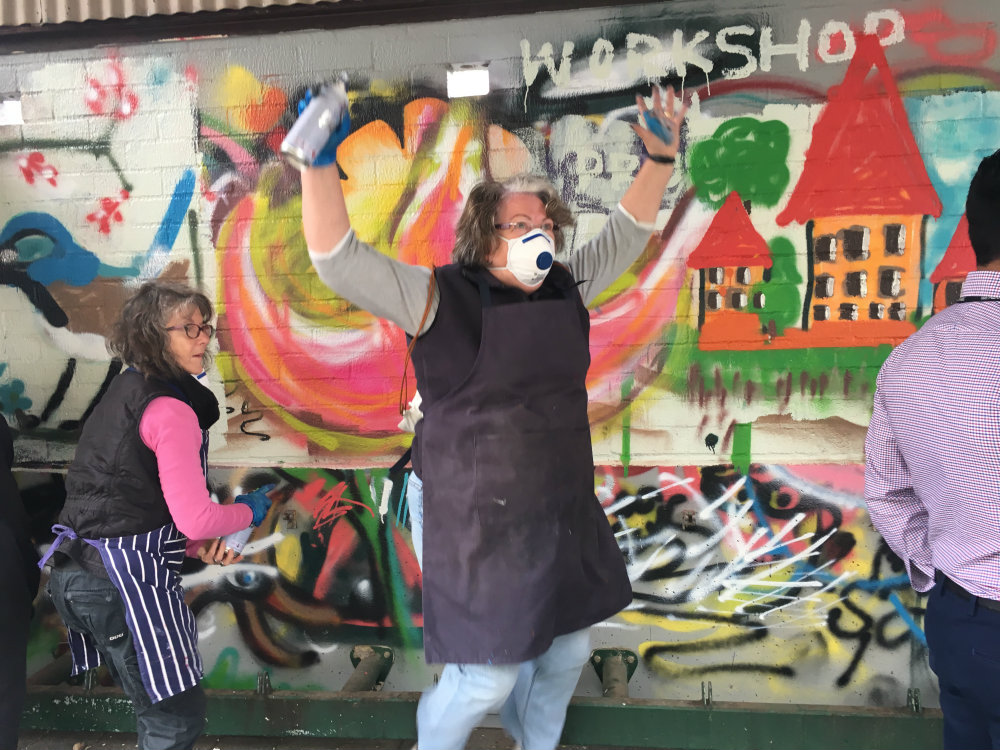 And at the orientation session, an 85-year-old participant turned out to have an astonishing photo collection of the street art around Canberra.

"There are a lot of assumptions about street artists as well, so the breaking of stereotypes went both ways," she added.

The orientation session revealed that participants were interested in working with the techniques and to the scale that street art allows. They were also drawn by a range of different – but equally compelling – reasons.

"One participant had an estranged family member who was a graffiti artist – and she wanted to join the project to gain greater understanding of this relative," Cathy said.

Another woman had just moved here from NSW and was feeling really socially isolated. Yet another had been very unwell, and hadn’t been out of her house for a year. She saw this project as a safe zone and a good reason to leave her house, and sort of re-join society.

After a few practice painting sessions, participants were split into two groups. One group brainstormed a funky, floral-themed piece and brought it to life; the other went to work on Mr Reeve’s idea of painting a large Action bus.

"They hit the walls, and they had a ball," she said. 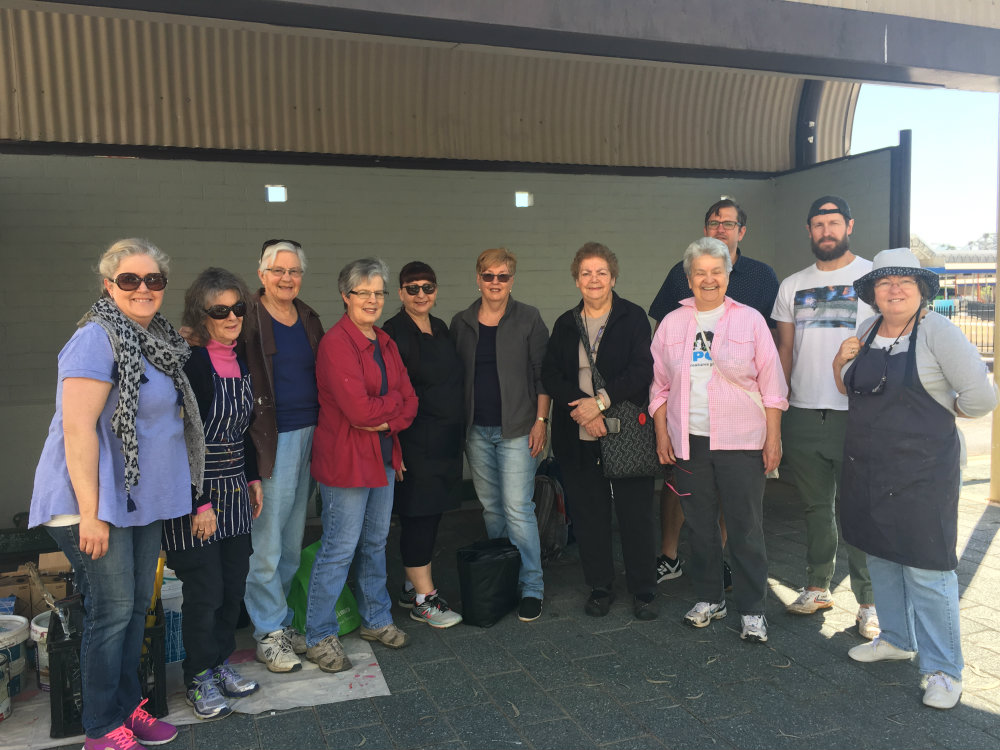 While it feeds into her research, the Streetwise Project also has deep personal roots for Dr Hope.

"I was very fond of my grandparents, and I never saw them as simply 'old'," she said. "They were vital, vibrant people, and so much more than just their ages."

Art and play proved to be true common grounds of the spirit for the Streetwise participants, the artists who mentored them, the organisers and even the people who now see the murals in Woden.

"It was such a transformative, freeing experience for everyone involved," Cathy said.

"The project renewed a formerly bleak space, woke so much passion in its participants, built ongoing connections, sparked ideas and inspiration.

"We’ve had so many people expressing interest in us doing more of these, and we certainly hope to. It’s been a real testament to the transformative nature of play," she said.

Words by Suzanne Lazaroo and images courtesy of Lisa Petheram

The creation of a virtual community

Video games aren’t a new concept, but the way they’ve been used to maintain social connection during social isolation is.

Should we be concerned that the future of traditional media may be on the decline in the wake of fake news, declining audiences and misreporting … or not?