Content warning: this article touches on conflict and includes some refugees’ experiences.

Mohammad Abdul-Hwas’ passion to study and research a refugee crisis is drawn from his family’s Palestinian heritage.

His parents’ and grandparents’ lived experiences of the ongoing Palestinian refugee crisis, that has lasted the past 70 years, has created a deep empathy for refugees. Connecting with Syrian refugees in Jordan who have similar lived experience drove Mohammad to research deliberative democracy, with the ambition to improve the experience and agency for people caught in a refugee crisis.

Mohammad settled in New Zealand in 2003, where he completed his undergraduate degree in business at Auckland University of Technology. He then worked at Fairfax Media and completed a Postgraduate Diploma and Postgraduate Certificate at Massey University.

With New Zealand citizenship, Mohammad was able to come to Australia to complete his Master of Management at the University of Canberra, graduating in 2016. It was while pursuing his master’s degree that Mohammad dove into the world of leadership and governance.

Following multiple visits to Jordan – where his extended family is from – between 2012 and 2018, Mohammad’s interest and studies would pivot toward an underlying passion for refugee governance.  His visits took place shortly after the Syrian conflict escalated from the Arab Spring protests in 2011 – an event that displaced millions, many of whom have ended up in neighbouring countries.

Mohammad’s interest in the Syrian refugee community stemmed from the number of similarities between their journeys, and the journeys of his extended family. He also wanted to know more about their individual experiences.

“When you go to Jordan – I’m sure it’s the same in Lebanon and Turkey – you meet Syrians at the shops, markets, just everyday life. When I met some of them in the shops where they were working, I realised they were from Syria from their different dialect and accent,” Mohammad says.

“They started telling me stories of how they came from Syria to Jordan, and their experience really touched me because there were similarities between their experiences and feelings to those of Palestinian refugees I relate to.”

One particular family shared how grateful they were for their jobs back in Syria, when brothers and sisters all worked together in their family-owned business. Their parents fled Syria to Jordan and told Mohammad about their journey to reunite with their mother - following their father’s passing in Jordan - and the assistance their uncle gave in finding them a safer route out of Syria.

Inspired by these stories, his family’s experiences, and his studies, Mohammad wanted to know more about how non-government organisations (NGOs) and governments make decisions about refugee settlements and how these processes could be improved, resulting in better outcomes for refugees. He began meeting with NGOs in Jordan to learn more.

“I thought to myself, ‘Okay, [linking back to my studies in] management and leadership, I want to do something to help these people and their situation. I don’t know how, but I want to help and investigate,” Mohammad says.

“I needed to do something that would make an impact.”

He reached out to universities around Australia, looking to secure his PhD candidature in the space, including UC, and started reaching out to possible supervisors for his project. He succeeded in finding a supervisor ─ Dr Nicole Curato, Professor of Political Sociology within the University’s Centre for Deliberative Democracy and Global Governance.

“Connecting her areas of expertise – deliberative democracy and paying attention to vulnerable people in disaster contexts – gave me a foundation to approach my PhD project about the Syrian refugee crisis,” Mohammad says.

Deliberative democracy is an approach under which decisions are the outcome of deliberation by citizens, or reasonable discussion and debate. Inclusion, authenticity, and consequentiality are three core themes within deliberative democracy, and Mohammad has been exploring these within groups of both decision-makers and refugees.

Throughout his studies, Mohammad has interviewed officials from the Jordanian government, NGOs, including the International Committee of the Red Cross, and UN agencies including UNHCR, to understand decision-makers’ experiences and processes. A challenge with refugee settlements is engaging all parties, the host state, NGOs, and refugees, in deliberations so the best outcomes and solutions can be negotiated.

He then interviewed refugees living in the Za’atari refugee camp – the world’s largest camp for Syrian refugees, which was established in 2012. Its population swelled to 120,000 people within a year of the first refugees arriving, with people living in tents without proper markets to purchase food and essentials, and with no kitchen facilities or private toilets.

It has since become a permanent settlement, with caravans for housing, schools, markets and medical centres, and the population now sits at 80,000 people. There have been 20,000 births recorded in the camp; many of the children living there have never been to Syria.

The camp is made up of 12 centres, or districts, that meet fortnightly to listen to people within the district and then report back to decisionmakers. There is a hotline for people to call to provide feedback and suggestions, and field assessments are another opportunity for decision makers to hear directly from refugees.

“There are practices and processes for decision-makers to listen to refugees, however, these have little impact on the lives of refugees and the decisions of humanitarian actors,” Mohammad says. 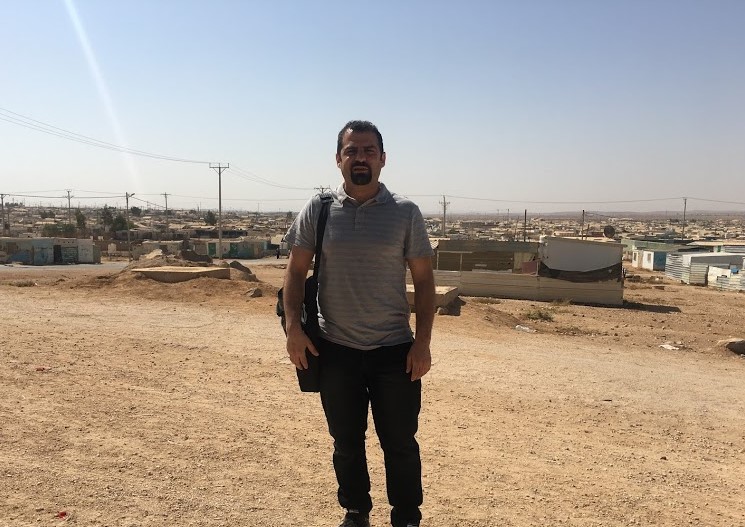 “I can’t express the feelings I experienced walking the streets of Za’atari,” Mohammad says. “They have shops and schools now, there are streets to drive a car on. It’s vastly different to the place it started out as and I’ve watched it change over multiple visits.”

Mohammad interviewed an 18-year-old man, who would have been 11 when he first arrived at the Za’atari refugee camp.

“He was the most brave to speak to me, possibly because he was young. He told me they weren’t getting what they were promised. Fixing the electricity supply can take several weeks; they kept asking for a bigger caravan with no answer for months until they gave up this need,” he says.

Many of the refugees that arrived at the Za’atari camp have not left the settlement, even though they’re permitted to. Living outside the camp comes with significant challenges – gaining employment can be very challenging, and the cost of rent outside the camp is high, which adds more burden on quality of life that can cause broader problems related to health and education.

One family shared with Mohammad that they left the camp after two years of living there in tents – but ultimately returned because life was harder outside the settlement. By then, the camp had built schools and medical centres, and a lot of tents have been replaced with caravans that have made it easier to live inside.

Mohammad looks to some of the Palestinian refugee camps in Palestine, Jordan, Lebanon, and Syria that have turned into ‘permanently temporary’ settlements.

“The Syrian camps started as tents, now there are mostly caravans. I believe that they will eventually become cities with houses, like many of the Palestinian camps,” he says.

“Even if Syria becomes safe enough for its people to return, it has been so long that I am not sure everyone will.”

Mohammad is hoping his research will help decisionmakers empower and involve refugees in the decision-making processes that involve their safety, living conditions, and future.

“This research might better help manage and govern the refugee crisis in Syria and similar crises around the world,” he says.

“Fleeing your home country is a stressful, traumatic experience that can leave refugees feeling helpless and without hope. We need to listen to them, from the start, so they don’t need to resort to protests and other desperate actions, and can be supported properly.”

Mohammad also volunteers for the International Committee of the Red Cross as an Advocacy Officer and hopes to move into the humanitarian space full-time after completing his PhD – but he also hopes to stay within arm’s reach of academia and research, so that he can continue engaging with deliberative democracy theory and approach.

First generation student with a firm focus on brain health

Vicki McCarthy is the first in her family to pursue a tertiary education, with her love of sport leading to exercise-based research as a University of Canberra PhD candidate.