Kyle Hemming recalls his decision to focus on plants and plant ecology, rather than animals, during his undergraduate studies was triggered by a fascinating lecture on photosynthesis and an “absolutely disgusting” possum dissection.

He was studying zoology at the University of Otago in Aotearoa’s (New Zealand) South Island. Part of the zoology program was getting to know the insides of some of New Zealand’s infamous exotic (introduced) pests, such as the Australian brushtail possum. Apparently, Kyle’s possum was very bloated – “If someone nicked its intestine with a scalpel, I would have been out of there,” he says.

“At the same time, I had to sit through a lecture on photosynthesis, but I instantly became enamoured with the humble brilliance of plants. That lecture, and the possum experience, pushed me towards them.”

During his undergraduate degree, Kyle received a summer scholarship to work with a professor to help model native grasses in New Zealand.

He then went on to complete his honour’s degree in plant biotechnology. Kyle’s research looked at increasing the antioxidant content of a crop so it can grow in poorer conditions, such as dry or saline soils.

Mung beans are an Asian legume with a slightly sweet, nutty flavour. According to Kyle’s research, electrocuting them helped produce more antioxidants.

Following his Honour’s, Kyle applied for a PhD scholarship at the University of Canberra, which involved working with Centenary Professor Richard Duncan, a leader in the field. He came to Canberra in 2017 and has been here ever since.

Kyle’s PhD research looked at how introduced grass species (or ‘exotics’) could spread across Australia and how these grasses impact native plants.

“Weeds are a big issue in Australia — not just in your gardens but nationally – they cost over $6 billion in lost revenue and management per year,” he says.

One example is Cocksfoot, a grass common in Europe, North Africa and parts of Asia. It was introduced not long after European settlement in Australia as a pasture grass for livestock because it is well-suited to low fertility soils and hot, dry summers. But like many introduced grasses, it can escape and spread — establishing wild populations in parts of New South Wales and Victoria by the 1850s.

Researching the spread and impacts of exotic plants like Cocksfoot can be difficult – you don’t want to plant them in the wild, sit back, and watch what happens. So, Kyle planted 3,500 grasses in a glasshouse on campus to observe how the natives would fair against exotics in what he calls a “fight to the death”.

“It sounds like a gladiator battle, but they can kill each other. They’ll do it really slowly and passive aggressively – they will shade and steal water to kill a neighbour,” he says.

“I was cheering for the natives, of course, and there’s a special place in my heart for Canberra’s native grasses. The ACT’s natural temperate grasslands are among Australia’s most threatened ecosystems, mostly from habitat loss and weeds.” 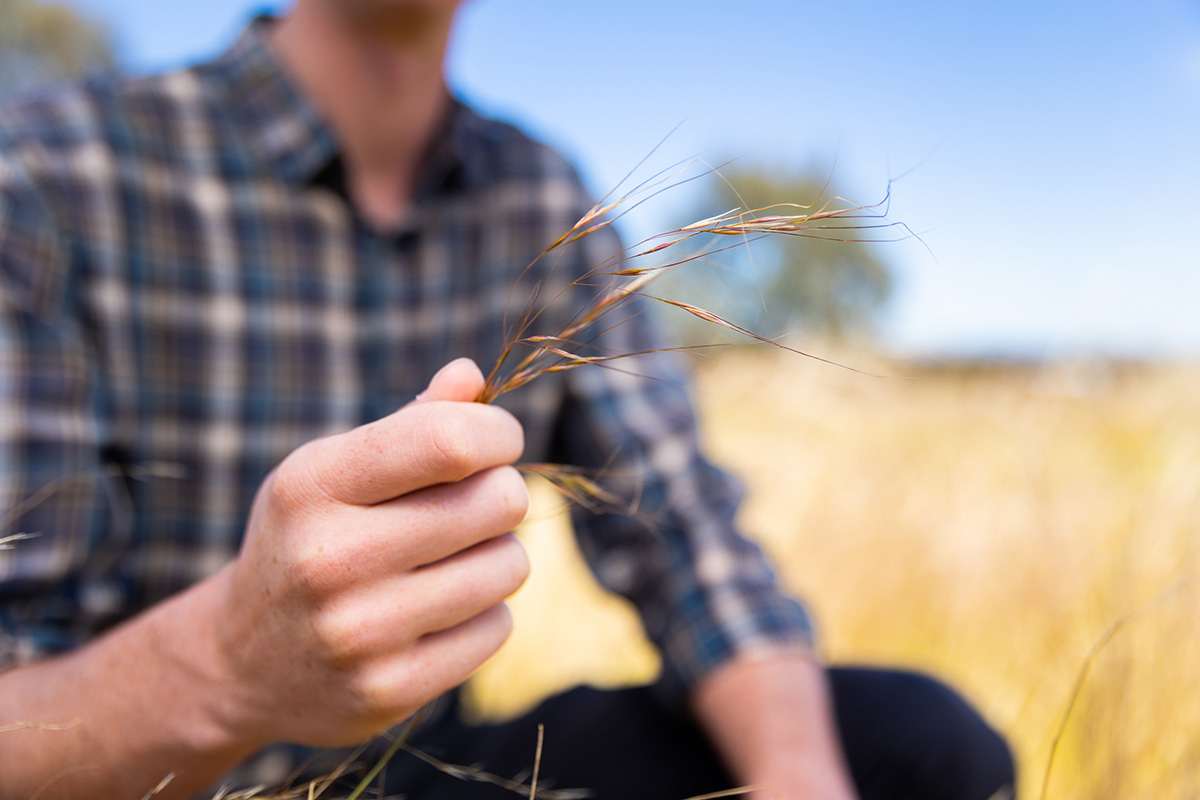 Australia’s native plants have adapted to survive poor conditions, particularly droughts. Kyle wanted to research how native plant species would fair against exotic species when resources are more abundant, such as increased rainfall during a La Nina cycle, and if this may result in exotic species impacting the natives.

But Kyle’s glasshouse experiment accidentally tested at extreme drought levels, because he’s a plant scientist, not an irrigation expert.

“I had to create – from scratch – an automatic watering system for my 3,500 grasses. It was quite a big setup – it had pipes and automatic sprinklers and all that sort of stuff,” he says.

The experiment was still valuable. Despite the drought conditions, Kyle was surprised to find that Cocksfoot still impacted the natives.

“So, thinking about our region, we have to prioritise managing exotic species in years like 2022 — where we’ve had lots of rainfall and weeds have taken off, but it’s still possible for exotics to impact native species in drought years too, which makes managing exotics really tricky,” he says.

Australia has an incredible diversity of native plants that have evolved over the last 80 million years – over 20,000 different species, including more than 1,000 species of native grasses, 1,500 orchids, 750 Eucalypts – the list goes on.

Astonishingly, this diversity has been eclipsed by the number of exotic plants that have been brought into Australia in the last 250 years: 30,000 introduced plant species, more than 20,000 of which have established wild populations.

The larger scale of Kyle’s research is understanding where exotic impacts could be greatest across Australia by looking at the potential spread of these 30,000 species.

“Once exotic species become established in an area, it’s very expensive, if not impossible, to control them,” Kyle says.

“The idea of my research is to identify where exotic species will spread to next by using native species as a sort of ‘template’, to identify potential exotic hotspots. If we can provide land managers with this sort of information, they are better set up to remove early exotic colonisers which will save time, money, and hopefully more native species,” he says.

Exotic species are also a local issue. So, what can you do to help manage the spread of exotic species?

“Weeding is really important. While the scale of issues may be national or global, it filters down to a small space. If you can weed your garden, or join a local volunteer group [the ACT Government has a list on its website], and plant more natives – it really helps,” he says.

“I’ve noticed more birds in my garden from having a few more natives. Change lies in more people contributing in small ways, and it’s also quite rewarding.”

Following his successful PhD candidature where he developed skills in data science, Kyle is now a Digital Research Analyst at UC, supporting other researchers with data manipulation and analysis in various fields.

He’s been assisting Cate Hilly, who is working on a survey for parents and medical practitioners to identify young children who may require additional support from doctors, physiotherapists, speech therapists and more, so they can access services to manage needs early.

“It’s really exciting to now be in a position to apply the skills I gained in my PhD to help other researchers in a range of fields. Now that I’ve finished, I can definitely say the grass is greener on the other side.”