The Handbook of Peer Production

The News and Media Research Centre is delighted to announce the publication of The Handbook of Peer Production, part of Wiley’s Handbooks in Communication and Media series. This Handbook, edited by the N&MRC’S Mathieu O’Neil with Christian Pentzold (University of Leipizg) and Sophie Toupin (University of Amsterdam), represents a milestone in the study of what has been described by Harvard’s Yochai Benkler as “the most significant organisational innovation that has emerged from Internet-mediated social practice.”

Peer production is a mode of commons-based and – ideally – commons-oriented production in which participation is voluntary and predicated on the self-selection of tasks. This decentralised organisational model, which does not rely on exclusive ownership and formal contracts, has in some cases surpassed traditional forms of production. Originally the Internet enabled millions of people to collectively produce and revise computer operating systems and applications, encyclopedia articles, and film and television databases. Today peer production is still associated to the digital commons in the case of wireless networks and online currencies, but also encompasses offline practices such as shared machine shops and biohacking, amongst many others.

The first-ever Handbook of Peer Production outlines central concepts, examines current and emerging areas of application, and analyses the forms and principles of cooperation that continue to impact multiple areas of production and sociality. Featuring thirty chapters by an international and diverse team of experts in the field, this landmark work maps the origins and manifestations of peer production, discusses the factors and conditions that are enabling, advancing, and co-opting it, and considers peer production projects’ current impacts and potential future consequences for the social order. Detailed chapters address the governance, political economy, and cultures of peer production, as well as user motivations, social rules and norms, the role of peer production in social change and activism, and much more. Filling a gap in available literature as the only extensive overview of peer production’s modes of generating informational goods and services, this ground-breaking volume:

The Handbook of Peer Production is an indispensable resource for students, instructors, researchers, and professionals working in fields such as communication studies, science and technology studies, sociology, and management studies, as well as those interested in the network information economy, the public domain, and new forms of organisation and networking.

More information about the book, including purchasing options, can be found here. 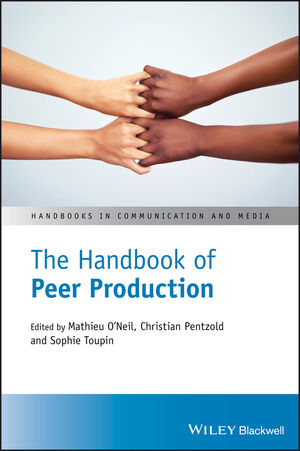 Chapter 30 – Be Your Own Peer! Principles and Policies for the Commons (Mathieu O’Neil, Sophie Toupin & Christian Pentzold)

Mathieu O'Neil is Associate Professor of Communication at the University of Canberra's News & Media Research Centre and Honorary Associate Professor of Sociology at the Australian National University, where he contributed to the creation of the Virtual Observatory for the Study of Online Networks. Mathieu’s research examines the policy and organizational aspects of commons‐based peer production, as well as risk issue diffusion and the adoption of causes and innovations in the online environment. He previously held academic appointments at the Université Stendhal - Grenoble 3, the Australian National University and the Université Paris Sorbonne. He has also worked as an editor and curator in Singapore, and as a researcher for the Australian Department of Broadband, Communications and the Digital Economy. He is the founder of the Journal of Peer Production. His work has been published in Social Networks, Journal of Peer Production, Réseaux, Information, Communication & Society, Organization Studies, New Media and Society, and the International Journal of Communication, among others.

Christian Pentzold is Professor of Media and Communication at the Department for Communication and Media Studies, Leipzig University, Germany. Before that, he worked in the Centre for Media, Communication and Information Research at the University of Bremen and the Institute for Media Research at Chemnitz University of Technology. He is broadly interested in the construction and appropriation of digital media and the roles information and communication technologies play in modern society. His work in communication research and media analysis links to insights coming from cultural sociology, linguistics as well as science and technology studies. In current projects, he looks at the public understanding of big data, the organization and governance of peer production, as well as the interplay of time, data, and media. His work has come out with Media, Culture & Society, New Media and Society, Communication, Culture and Critique, and the International Journal of Communication.

Sophie Toupin is a Fonds de recherche du Québec – Société et culture (FRQSC) postdoctoral fellow at the University of Amsterdam where she explores the linkages between feminism, data, and infrastructure. She completed her Ph.D. in the Department of Art History and Communication Studies at McGill University, Montreal, Canada. Her doctoral research examined the relationship between technology and anti-colonialism during the South African anti-apartheid struggle. Her work has been published in New Media and Society, Feminist Media Studies, Canadian Journal of Communication, Ada: A Journal of Gender, New Media, and Technology, and Journal of Peer Production, among others.