The Play, Creativity and Wellbeing Project is an applied research project that critically examines the role and capability of play in adult cultural practice.  It investigates sites of play to identify and explore those elements of play that elicit forms of creative and collaborative engagement, and to examine the impact of these elements on players and their environments.

In our current highly complex environment, play – with its exploratory, autotelic, generative, adaptive and collaborative capacities – is increasingly seen as a vital resource, with the potential for deployment in multiple settings, and with novel and transformative capabilities that enhance wellbeing. 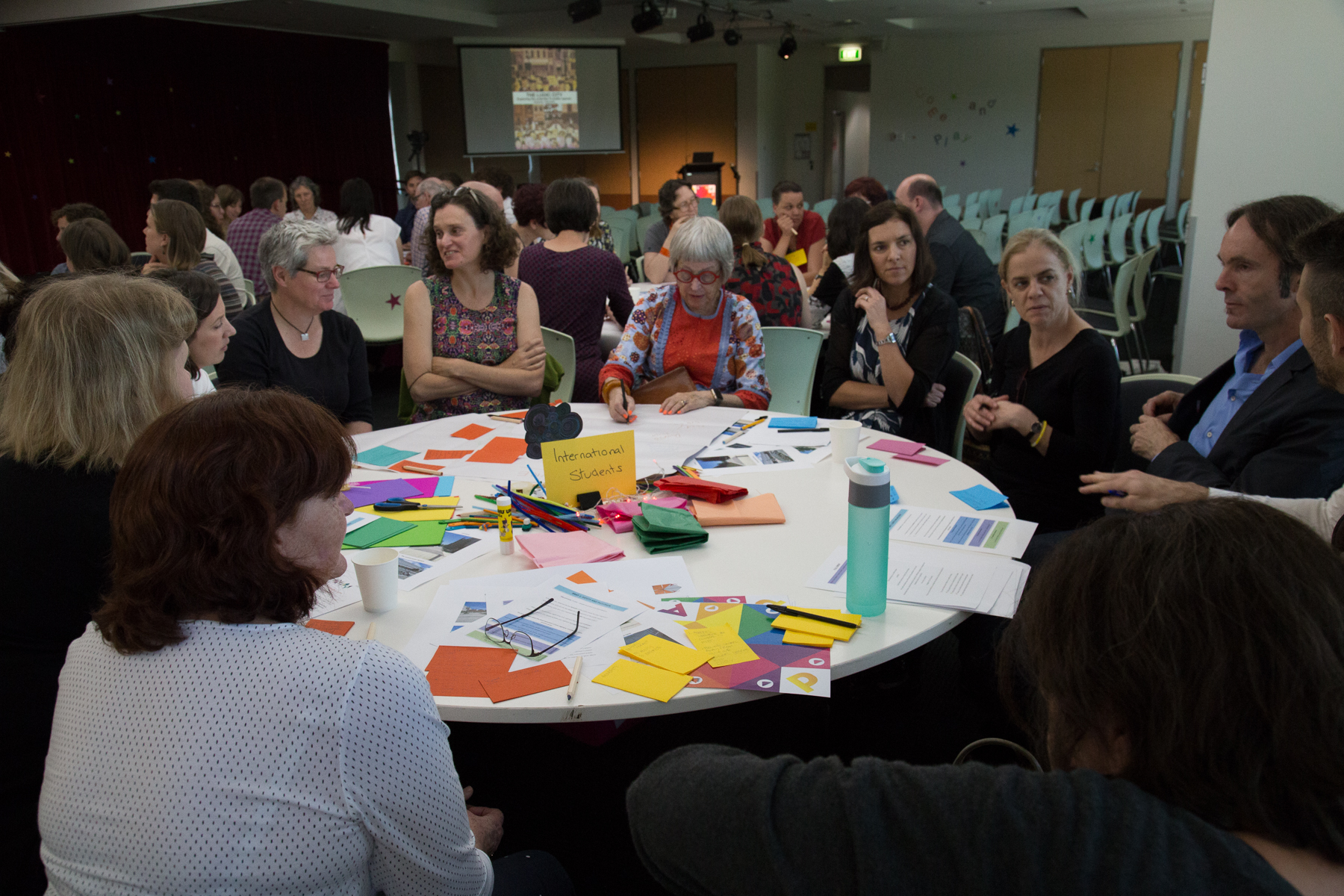 The Play, Creativity and Wellbeing Project explores play as a mode of engagement, as a driver of creativity and innovation, and as a facilitator of individual and community wellbeing.

Situated as we are in the ACT, the Play, Creativity and Wellbeing Project aims to examine Canberra as a site of play, and to work with local individuals and institutions to make Canberra a 'playful' city – to inspire play in myriad, diverse and beneficial ways.

The aims of the Play, Creativity and Wellbeing Project are:

The Play, Creativity and Wellbeing Project's research connects to the community through the ACT Play Activation Network. Explore the website to find out more.

On July 10 in the glorious city of Goulburn the Play, Creativity and Wellbeing Project in the CCCR presents a line-up of speakers whose work in regional place-making, creativity, the arts and health will inspire you to think differently about the many possibilities for enriching regional environments and improving community wellbeing.

We also showcase some of the fantastic and impactful work in Goulburn and hear from the local legends who are making it happen.

The event is sponsored by the Southern NSW Local Health District and supported by Southern Tableland Arts.

Designing a framework for engaging non-traditional segments in physical activity in natural environments: a pilot project with older persons 65+ at three destination nature sites in Canberra

This ACT Health Promotion project involves the development and trial of an evidence-based, transferable and scalable framework for engaging statistically less active segments of the ACT population in the daily required physical activity in natural environments.

This pilot project in the ﬁrst instance will deliver six distinct, co-designed programs to engage 30 older people in the required daily physical activity in three distinct natural environments - the Aboretum, Lanyon Homestead and Tidbinbilla. These programs will then be rolled out by the three destination sites for older adults across the ACT.

The project framework will then provide an ongoing tool for the eﬀective design of programs that motivate non-traditional users of natural environments to undertake physical activity in a range of green spaces.

With UC and Active Canberra, these sites will collaborate with two older adult groups in Canberra (Woden Seniors and COTA ACT) to co-design and trial the programs.

This project is innovative in that it seeks to break down barriers to physical engagement with, and activity in, green space by co-designing programs with non-traditional users to increase likelihood not only of initial engagement but also of repeat behaviour. This project draws on the principle of engagement: of designing programs that actively encourage incidental physical activity via recreational experiences built on the many positive aﬀordances of the natural environment.

Evaluation Suite of Research Tools for Activations in Canberra City

This project aims to provide the City Renewal Authority (CRA) with a suite of 5 informed, transferable, scalable and incentivised research tools to evaluate activations in the city and to engage community in a continuous dialogue that assists the CRA in co-constructing a more vibrant city with both activators (artists, community groups, local business etc) and the community, and in meaningful ways.

The Play, Creativity and Wellbeing Project, University of Canberra will design and trial five diﬀerent research models that examine the role and impact of the activations in the city.

These 5 research tools will provide the CRA with data on 5 activations. These tools can then be replicated or adjusted for ongoing use by the City Renewal Authority.

The Audit, combined with our previous research on best practice in Australian and international playgrounds will: 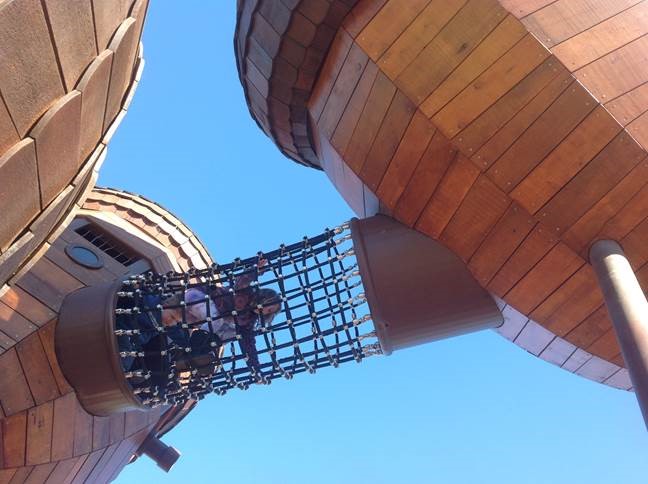 The Alinga Street Bridge Exhibition Series is a proposed play-themed series of installations (the title of the exhibition is currently under development) to be co-curated by Art Not Apart and the Play Activation Network, as part of an applied research project managed by the Play Creativity and Wellbeing Project, Centre for Creative and Cultural Research, University of Canberra.

The aim of this project is:

Phase 1: Peak Stuff
Peak Stuff (see image) is an art installation by Sydney’s Gas Studio, and proposed by Art Not Apart and the Play Activation Network for the City Renewal Authority’s 2018 initiative: Enlighten in the city. Peak Stuff will remain on the Alinga Street Bridge for a month, and then be exhibited in Civic Square for 3 hours to enable a more immersive engagement with the work. 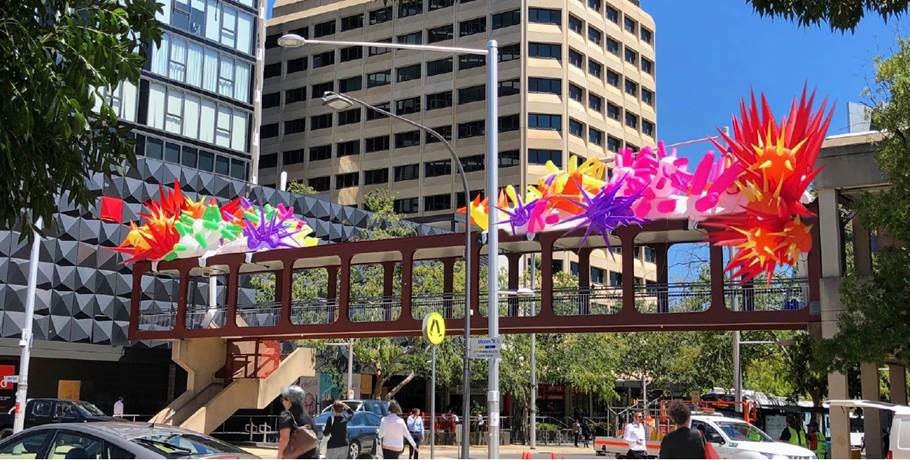 This project seeks to contribute to the development of a vital and sustainable public realm in Canberra through identification and analysis of international exemplars of urban activation. It will highlight examples of urban play that can contribute to the realisation of the five Place Principles of the ACT Government Strategic Urban Design Framework –connected; vibrant; responsive; diverse; green.

City to the Lake Playspace Study

This project informs the thinking and design of playspaces that will form part of Canberra’s urban renewal sites. Key to current international urban renewal strategies is the activation of sites through the integration of fixed and transient play elements (Stevens, 2007; Stôger, 2016). Within this context, designated play spaces – as public sites for gathering and for play in its various forms – can contribute in significant ways to urban activation, and to the development of a healthy, vibrant, green and liveable city more broadly.  Play spaces are vital for urban environments, acting as counterpoints and complements to the commercial imperatives that dominate the built environment. This project provides an international benchmark study of playspaces in urban environments, and an audit framework for Canberra’s destination playgrounds to identify needs and opportunities for Canberra playspace design.

This consultancy involves the production of a Report that:

The Play Creativity and Wellbeing Project at the University of Canberra will develop, deliver and evaluate a targeted urban agriculture initiative that supports health and wellbeing and contribute to the building of a resilient, socially just and environmentally sustainable food system.

With collaboration from all project partners, community consultation and engagement will occur through surveys and workshops with key stakeholders and participants to co-design a garden structure and approach that is meaningful to the particular communities it serves. The focus will be on supporting the development of a community-owned initiative with positive impacts beyond the borders of the garden and those directly involved. UC will lead an evaluation of the program development and implementation through the gathering and analysis of data through multi-staged surveys and interview/focus groups with key stakeholders and the identiﬁed community. This will assist in the development of best-practice guidelines for the development of similar programs in areas of need.

We will be working with local services and schools to identify interest and level of need in various communities, with Charnwood and West Belconnen as a starting point. University of Canberra researchers will assist with gathering additional data related to various areas of the ACT that may beneﬁt from involvement in community gardens as a protective factor. We will also be preparing evidence of community gardens as part of an early intervention approach to reducing alcohol and drug misuse, and ascertaining its relevance to the ACT context.

Streetwise is an intergenerational participatory arts project involving the training of older Canberrans, by young professional street artists. The project was designed by Cathy Hope of the Play, Creativity and Wellbeing Project and Lisa Petheram, graffiti coordinator of Transport Canberra and City Services. Both are members of the Play Activation Network ACT (PAN) – and this is a PAN initiative. The project is funded by partners Westfield Woden ($10,000) and Transport Canberra and City Services ($8,000 and in-kind support).

In this pilot project, two street artists will design and deliver approved street art murals in and around the Woden bus interchange with groups of older adults. There will be initial training workshop/s by the artists and later each will facilitate the painting of a mural in collaboration with their groups.

Woden is perceived by older people to be an unsafe area, with entrenched and growing ‘social problems’. This unique project aims to work with different age groups to create a more positive, inclusive and colourful space in Woden, especially at the bus interchange. It is likely this project can have positive impacts on older (and other) people to help them feel more welcome in the area, and consequently seek to spend more time in public in the Woden precinct. The project also has benefits of creating intergenerational exchange, relationships and connection. This can lead to improved wellbeing measures for those involved, as well as the general public who witness the project and artwork.

PLAY FOR A VITAL AND SUSTAINABLE CITY

The Play, Creativity and Culture Symposium: Play for a Vital and Sustainable City was held over two days, 22 to 23 November 2017, at the Theo Notaras Multicultural Centre and the Canberra Museum and Gallery in Civic Square, Canberra. As part of the symposium a workshop was held with the brief to make Civic Square a more playful, people-centred and inclusive public space.