According to the Australian Galleries, William Robinson is one of Australia's foremost contemporary artists. He is best known for his slightly skewed perspectives of Australian landscapes along with his humourous and whimsical portraits.1 These are a product of what William considers as his quiet childhood where he grew up thinking about the world and the meaning of life and his place within it with a sense of absurdity and wonder. 2

William Robinson was born in Brisbane in 1936 to Ada and Robert Robinson, the second of four children. By the time he attended school, William was already familiar working with pastels and by age seven he had began to learn the piano.3 In 1953, Robinson saw the exhibition, French Painting Today at the Queensland Art Gallery whilst at his final year at high school and was 'bowled over' soaking up the works of art by Matisse and Chagall.4 This inspired William who undertook teacher-training and applied for a scholarship the following year  to study as an art teacher at the Central Technical College in Brisbane (now part of QUT). It was here that Bill was inspired by Arthur Evan Read, a landscape painter who explored the tropical landscape of Queensland.5

Between 1963 and 1989 William Robinson taught in several institutes and colleges before becoming a full-time painter. During this time, Robinson produced a number of solo and group exhibitions through different commercial and regional galleries across Australia. The 1970s and 1980s were an explosive time in  Queensland's art scene where Robinson's work that were verdant and vertiginous and could be set alongside those of Roy and Betty Churcher, Davida Allen and poets such as Bruce Dawe, David Malouf and Thomas Shapcott. 6 According to Philip Bacon, William's dealer, his works provided a completely new look. 'Bill's paintings are full of visual tricks but yo don't need to know the allusions to enjoy his work, they're just there for his own amusement'.7

Today, William Robinson's works of art are highly sought after and can be found in many regional galleries, private and corporate collections. 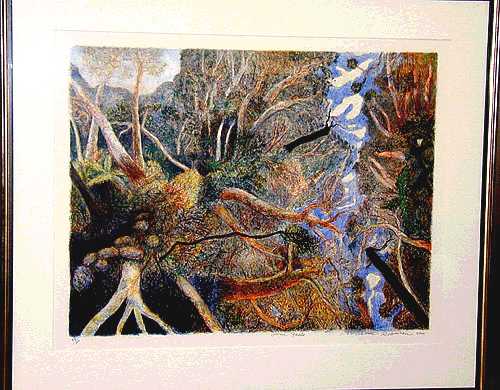 Acquired by the University of Canberra in December 2001, from the Chapman Gallery, Canberra, Twin Falls is a limited lithograph print edition 89 out of 100. 8 The work depicts a tropical landscape probably in Northern Queensland in a vibrant manner and shows Robinson's iconic warped and skewed style. According to Candida Baker of the Sydney Morning Herald, the large scale works by Robinson allow audiences and critics to fully comprehend Ronbinson's way of seeing. The use of multiple perspectives in his rainforest paintings depicts the filtered light and leafy canopy. Its as if we are in an Alice in Wonderland world where nothing is quite the same. It is a disorientating view- perhaps the perception one may get if lost in the rainforest.

Although this is the only example of William Robinson's work of art in the University's collection, Twin Falls can be compared to other works within the collection favourably such as the works by Brian Siedel, Tropical Rainforest and Autumn Ponds (see Brian Siedel pages)