Warren Langley has been working in the public sphere as an artist for the past 35 years and is known for using light and glass as principle constituents in his works. Langley's ouvre addresses the notion of sight and site, both visual and contextual in the built environment. His portfolio includes works of art in a number of locations globally. These include, Parliament House, Canberra, Maison de la Opera, Amiens, France, The Museum of Contemporary Art, Tacoma, USA, Hong Kong International Airport and the World Expo, Shanghai 2011.

In 1996 Langley was awarded a Fellowship by the Australia Council for the Arts and has been recognised internationally for his large scale works using light and glass. In 2010 Langley was a finalist in the Art in the Working Place category at the International Architecture Symposium in Barcelona.

In Langley's own words, the sculpture addresses the broad notion of the timeless nature of human endeavour. This work is composed of toughened safety glass which completely encapsulates five life size figurative forms and an overheard construction of painted timber. The glass surface has been etched with a grid-like detailing which allows a different readability of the internal forms depending upon distance from the sculpture. IN short, the forms within are clearly visible from distance but as the viewer approaches the work it requires more visual effort to discern the internal forms.

Warren Langley won the prestigious Helen Lempriere National Sculpture prize with this work of art in 2003. It was acquired in 2005 with funds from the Don Aitken Cultural Funds. 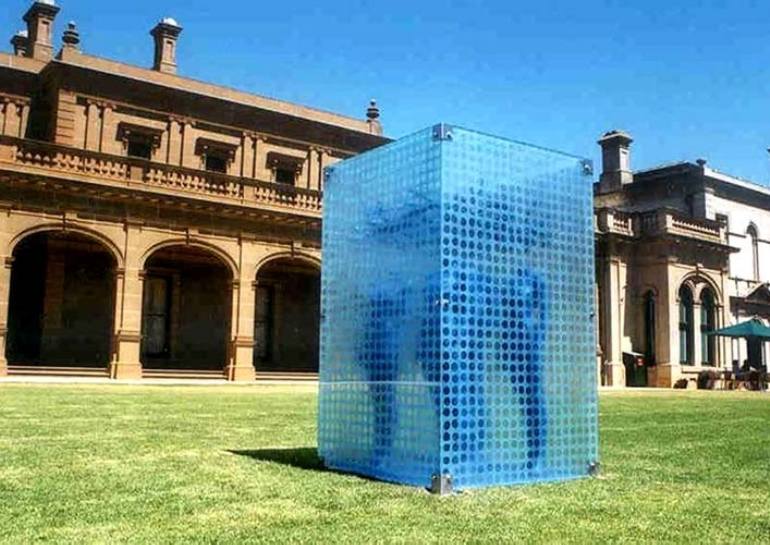 The University of Canberra Art Collection also has a ceramic plate acquired in 1986 as shown below.