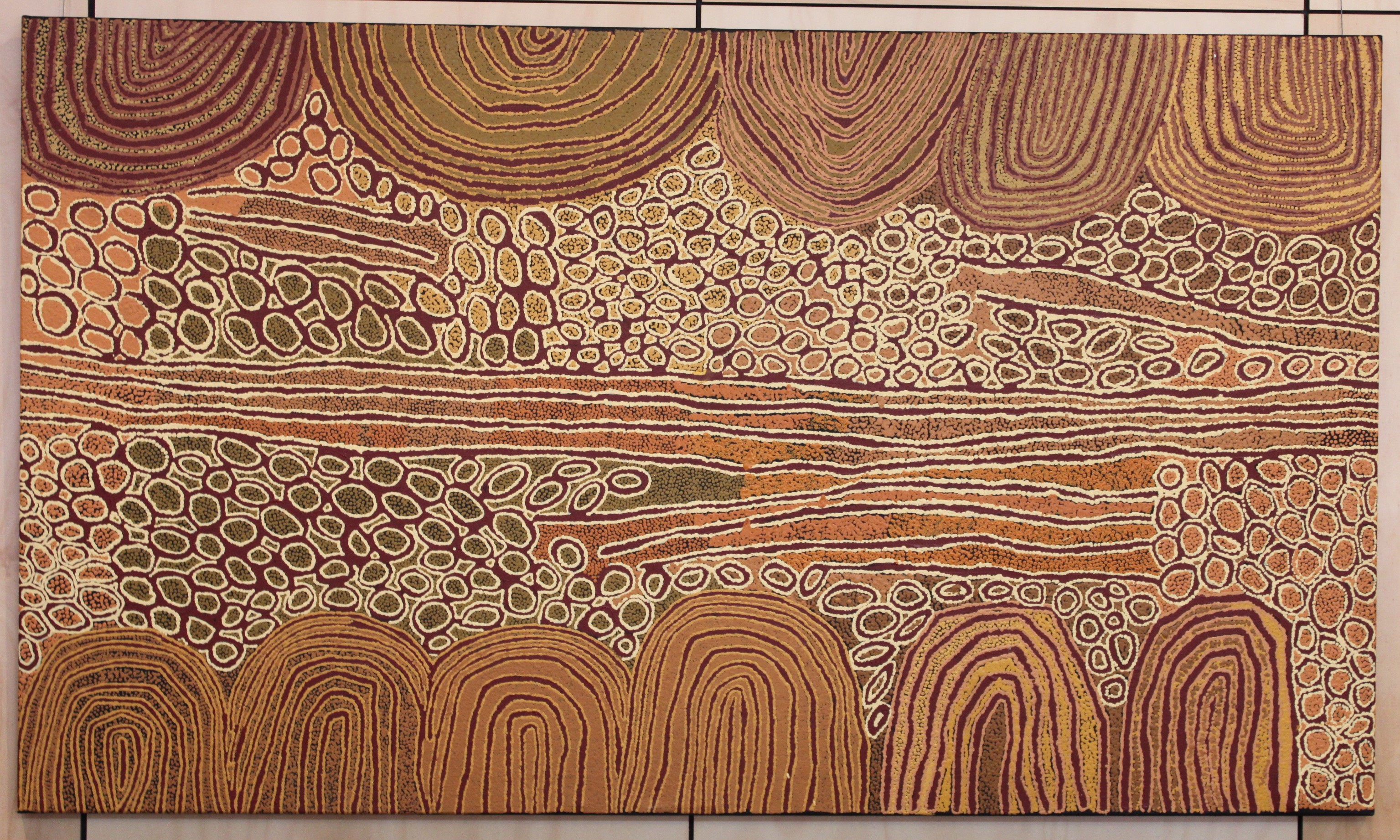 The following biographical details are courtesy of the Kate Owen Gallery:

'As one of the last generation to remember a childhood lived in the desert hunting and gathering with her family, Walangkura Napanangka's paintings recall the stories of country and the location of specific sites in her traditional homeland west of the salt lake of Karrkurutinjinya (Lake Macdonald).

Walangkura was about circa 1946, at Tjitururrnga west of Kintore, in the remote and arid country between the Northern Territory and Western Australia, she lived with her father Rantji Tjapangati and mother Inyuwa Nampitjinpa and later, while still a teenager, travelled by foot with her family over the hundreds of kilometres from their remote desert home eventually joining Uta Uta Tjangala's group as they walked in to the settlements of Haasts Bluff and then Papunya.2

The lure of settlement life with its promise of plentiful food and water belied the harsh conversion they would make to an alien lifestyle with its many problems and unfamiliar demands. The upheaval however, was ameliorated to some degree by the proximity of her immediate family including her mother Inyuwa, adoptive father Tutuma Tjapangati, and sister Pirrmangka Napanangka (now deceased) all of whom became artists.

Relocated to the community of Kintore in 1981 when the outstation movement began Walangkura participated in the historic women's collaborative painting project (1994) that was initiated by the older women as a means of re-affirming their own spiritual and ancestral roots. It was a time of specifically female singing, ceremony and painting, away from the gaze of outsiders and men folk. The huge and colourful canvases that emerged from the women's camp were 'alive with the ritual excitement and narrative intensity of the occasion' (Johnson 2000: 197). Within a year, Papunya Tula Artists, now established at Kintore, had taken on many of these women as full-time artists, revitalising the company after the deaths of many of the original 'painting men'. While individual women forged their own stylistic trajectory, these paintings were immediately distinguishable from the men's more cerebral and symmetrical style. They radiated an exuberant and vibrant energy, the felt heart-beat of women's affinity to country and spirit.

Walangkura's early works, created from 1996 onward, are characterized by masses of small markings and motifs covering large areas of canvas. Her favorite colour, a deep sandy orange predominates, accentuated against more somber blacks and reds and dusky greens or yellows. More recent works show a gestural quality though still tightly packed with an intensity of geometric line work representing sandhills. In a sense this provides a strong visual and contextual link to the men's linear style as exemplified by the works of George Tjungurayi, Turkey Tolson and Willy Tjungurayi. They are rich with a sense of rhythm and unimpeded movement: they show sandhills, rockholes, journeys and gatherings of ancestral women, the flow of colours in subtle shifts of light. Many of these are monumental works that transmit the confidence of an assured and dynamic creativity. Walangkura transmits the power of the desert, soaked up during her childhood years, and imbues her works with the mystery of a sacred perception.

Walagkura has become one of Papunya Tula's most senior women artists. After the death of her mother Inyuwa and the tragic death of her half sister Pirrmangka in 2001, she moved for a time to Kiwirrkura where she lived with her husband and fellow artist Johnny Yungut Tjupurrula and their six children. Her first solo exhibition was held at Gallery Gabrielle Pizzi in 2003, and this was followed by another at Utopia Art Sydney in 2004. As her fame spread from this time onward she began painting increasingly for a number of private independent dealers outside of the Papunya Tula company. As a result her works can be seen in a great many galleries and retail shops throughout the country.
Walangkura Napanangka is a formidable artist capable of creating masterpieces on canvases up to three metres in size and many of these, despite their provenance, are likely to become emblematic examples of Pintupi women's art.1

Walangkura Napanangka focuses on the Jukurrpa or Dreaming stories belonging to the women of her area in the Gibson Desert to the west of Kintore. Walangkura paints stories of sites that mark the epic journey of the ancestor figure Kutungka Napanangka, as she travelled eastwards from the Gibson Desert country beyond Kiwirrkurra in the west, across sandhill country to an area of surrounding rockholes, depicted by concentric circles, that lie south west of Mt Liebig. The curves through the painting represent the hill country through with Kutungka passed through .  Kutungka is a powerful Ancestor figure, capable of devouring humans, and her story intersects with other Dreamings as she traverses the great tracts of Pintupi country. 2