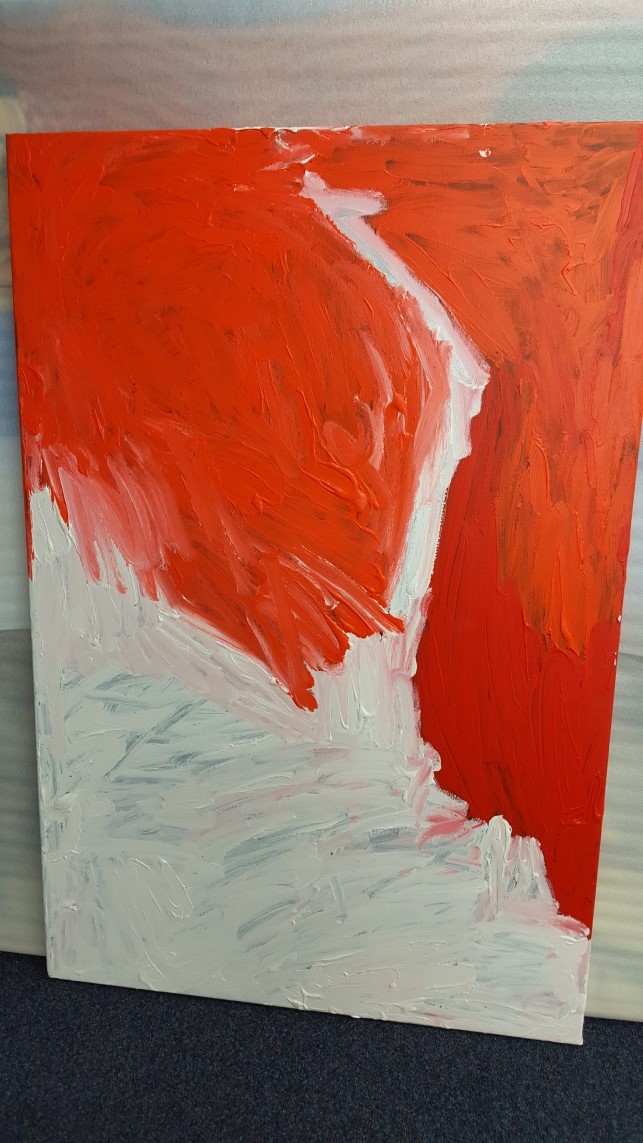 According to Nicolas Evans writing for the Australian,  Sally Gabori  was born at Bentinck Island around 1924. Her tribal name, Mirdidingkingathi Juwarnda, means “dolphin born at Mirdidingki. ”She grew to womanhood at a time when her people, the Kaiadilt, still lived a traditional life, uninfluenced by the encroachment of Europeans. 1

Much like other contemporary indigenous artists such as the Pintupi Nine,  Sally had  almost no contact with non-Kaiadit people by the time she was twenty. Her community lived from fishing, gathering shellfish and vegetable foods, and maintaining the stone fish walls around the shores of Bentinck Island.

When missionaries moved the Kaiadilt to Mornington Island in the 1940s, she was too old to go to school, and thus did not directly suffer the ridiculing of her language and culture that tormented those only a few years younger than her.

Her English was basic, and she never learned to read and write. Her whole life was oriented to the Kaiadilt people’s ancient traditions and, even after their removal to Mornington Island, she kept up a largely traditional life: fishing and gathering bush foods, remaining with her family and the community. In the Kayardild language of Bentinck Island, the word miburlda, or eye, forms the root of miburiji, “in (one’s) far eye”. In the intense conversations in which the Kaiadilt held to their links to their real country, Bentinck Island could be seen and conjured only in the remote eye of exiled memory.

Gabori did not hold a paintbrush until she was in her 80s. In 2005, Mornington Arts Centre co-ordinator Brett Evans made appropriate materials available to her and encouraged her to try painting. Other Kaiadilt women of similar age followed suit, each developing their own distinctive style.2

Brisbane art dealer Simon Turner, of Woolloongabba Art Gallery, was the first to notice her talent and show her work commercially, followed by Beverly Knight of Alcaston Gallery in Melbourne, leading to a string of exhibitions and awards in the years that followed.

What makes her work so intriguing is the way it represents a culture of seeing, more than a culture of painting. Late in her life, she adopted a distinctive and abstract artistic language to show us how the Kaiadilt see their world. A Singapore show she presented with the other Kaiadilt women painters was appositely titled Ngalda marraaju wuuju dulku kilwanmaruthu: “We will show our country to you all.”3

Her style seems so direct that one can conclude she spent her whole life preparing exactly what she wanted to show us.

My Country is an abstract work, acrylic on canvas acquired by the University of Canberra on 1st June 2011. It is archetypal of Gabori’s work with bold blocks of colour representing aspects of the land. This is the only work representing Sally Gabori in the University’s collection.

Sally Gabori is represented in the Queensland Art Gallery, The Art Gallery of Western Australia and various galleries in Melbourne and Sydney.. He works of art are also represented internationally in the collections of the University of Virginia, US, The Gallery Mayfair, London, UK and the Royal Hospital in Chelsea London.4

4 Note: Taken from a note from Carole Kayrooz emiail  to Stephen Parker of 6 June 2011  on Artists File.. Curator's Cabinet.