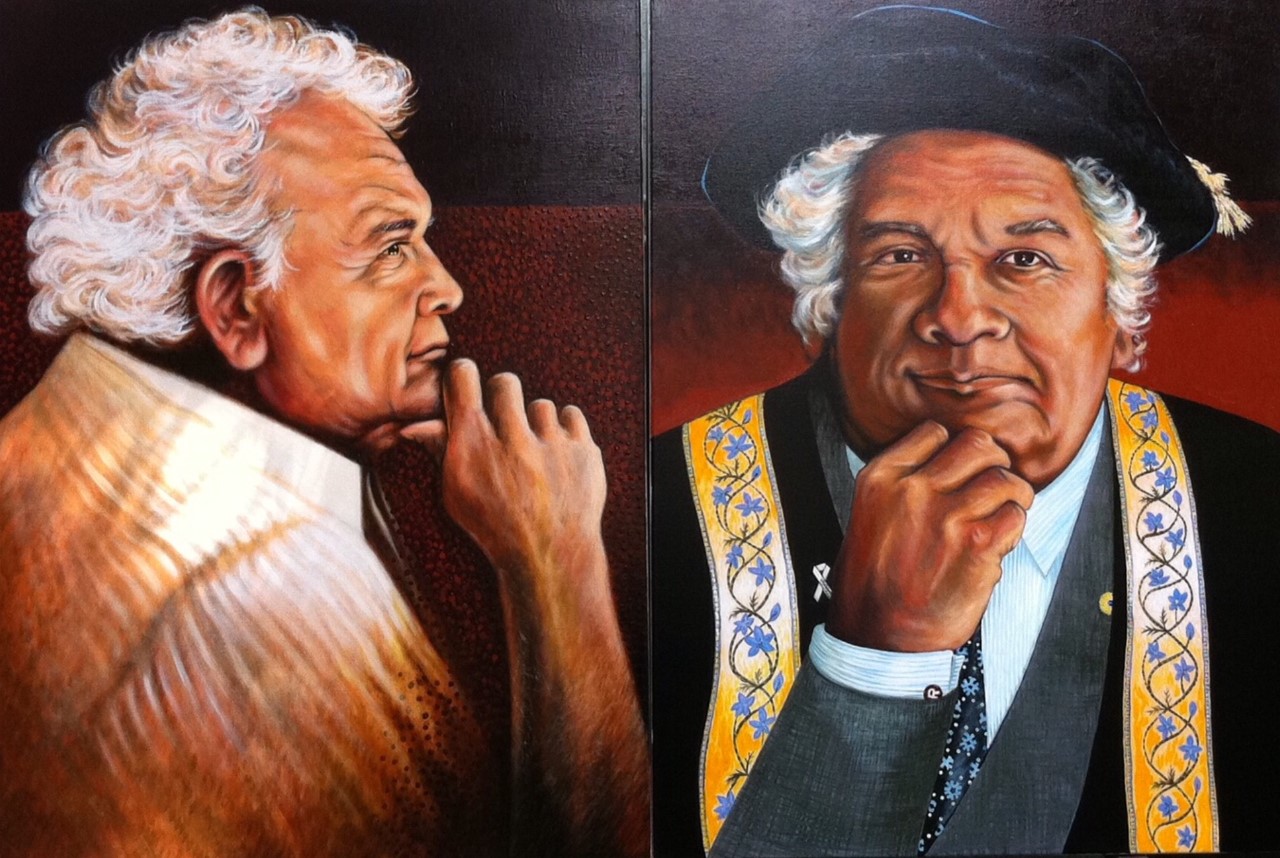 The portrait of Dr Tom Calma by Neville Dawson is an extraordinary combination involving the artist and subject.  Dr Tom Calma is portrayed in both profile and face on in rather an expressive pose with his right hand touching his chin as if in a moment of thoughtful contemplation. The left portrait in profile shows the subject in casual attire; his white shirt and hair contrasting strikingly against the dark red and black background. The portrait to the right shows Dr Tom Calma in his ceremonial attire as Chancellor of the University of Canberra against the same dark background. The diptych is infused with a range of meanings that reach out to different audiences. Both portraits contrast and complement each other in a way which respects the subject. It is painted in a manner, style and size reminiscent of the Old Masters. One can see perhaps the influence of Van Dyck’s triptych of Charles I whilst the contemplative pose is often used to represent meditation, study and thinking; attributes that are shared by many other portrait subjects in history. 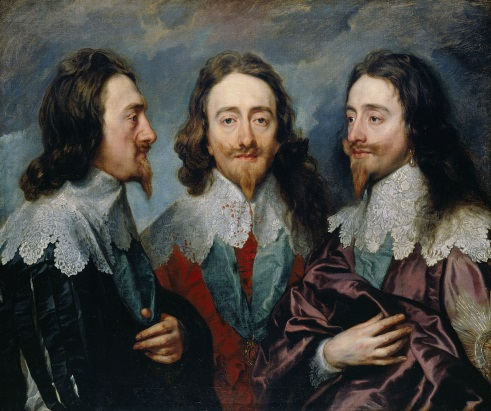 Neville Dawson (b 1948) is currently the Art Master at Newington College, Sydney.  He is perhaps best known for his portraits of Lindy Chamberlain-Creighton, produced between 1988 and 2010. His first portrait was part of his PhD thesis based on the Uluru Case. His paper stressed that no single theory about art or our relationship with it can really render an artistic practice invalid. Rather critical ideas from both past and present can and should be drawn upon simultaneously to assist in making meaning.  This is consistent with the observation that artists and viewers alike appreciate artistic expression on many levels at once. These are clearly expressed in the Dr Tom Calma portrait. Dawson went onto portray Lindy Chamberlain in 1992 (which was exhibited in the Sydney Opera House in 2002 for the Opera ‘Lindy’) and 2010, which was entered for the Archibald Prize.

Like the 2010 Lindy contemplating Guy Boyd, the Dr Tom Calma portrait was entered for the Archibald Prize in 2015. The work of art is a faithful portrayal of Australia’s first indigenous university chancellor, Order of Australia recipient in 2013 and an advocate for human rights and social justice.   Dr Calma has dedicated his life to improving the lives of all Australians and particularly Aboriginal and Torres Strait Islander Australians. Having served as a Social Justice Commissioner, Race Discrimination Commissioner and as a senior diplomat, Dr Tom Calma has championed the importance of empowerment through his work in education, training, employment, health, justice and development. He works to create opportunities for Indigenous voices to be heard and to build partnerships to improve their health , well-being and economic independence. His landmark 2005 report calling for the life expectancy gap between Indigenous and non-Indigenous people to be closed within a generation laid the groundwork for the Close the Gap campaign and COAG’s Closing the Gap response. 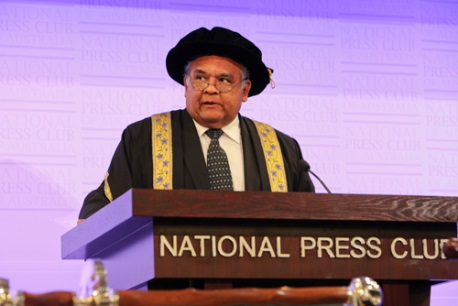 The diptych of Dr Tom Calma therefore holds major significance for both the University of Canberra and for the nation both culturally and aesthetically. It is a work of art from a renowned Australian artist that has the ability to infuse his portraits with different meanings and appeal to a wide audience whilst giving the subject the praise, dignity and respect of a leading figure in Australian Society.