The Artist & the work

From the Ikuntji Artists website:  Katungka is one of the daughters of Katarra Nampitjinpa, an important Pintupi artist who painted originally with the Papunya Tula Artists and then later with Ikuntji artists at Haasts Bluff. Katungka watched her mother and sister, Permungka, paint for many years but she only started painting regularly after her mother passed away in 1999 . Katungka drives 100 kilometres round trip to and from Papunya every day to paint her stories.1

An interesting aspect to Katungka's works is her ability to reconcile her religious beliefs as a devout Christian and traditions from her Country. Katungka paints her mother’s dreaming stories or tjukurrpa from her country Ulkapa, near Kintore and the tjukurrpa from her own country at Intinti, both of which are far west of Haast’s Bluff, over the West Australian border. The stories at Intinti involve women hunting for kuniya or carpet snakes with nullanullas. The two kuniya disappear down rockholes, hiding from the women2.

In 2003 Katungka developed her white salt-lake works. These have expanded and developed with fine marking all over the white canvas. Shadow forms are seen as marks in the salt lake. These marks represent people travelling, the wind shifting the salt, animal tracks and the myriad marks left on the salt pan by even the most minor change in the environment. 3This work of art is a limited edition print 12th of 20. 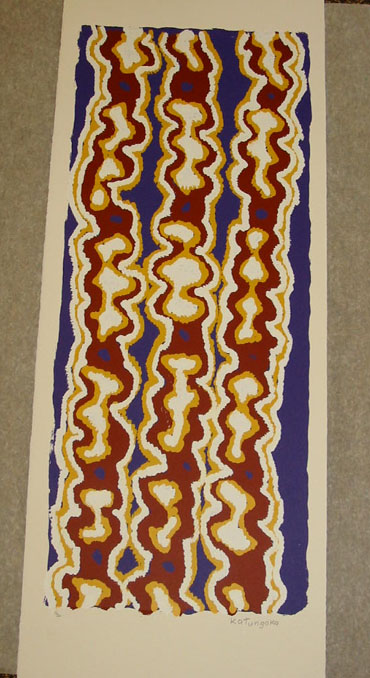 This work of art was purchased by the University of Canberra in 2002.