John Brack is one of more significant artists in Australian art history in the second half of the Twentieth Century. John Brack was born in East Hawthorn, Melbourne on the 10th May 1920. After leaving school at the height of the Depression, John worked as an office clerk but spent his evenings at the State Library of Victoria where he immersed himself in the world of literature where he discovered a reproduction of a Van Gogh that so inspired him. From 1938 to 1940 he attended evening classes at the National Gallery of Victoria Art School before spending nearly six years in the AIF during World War Two.

As part of the Commonwealth Reconstruction Training Scheme for Ex-Servicemen, Brack enrolled as a full-time student at the National Gallery of Art School. His fellow students included Fred Williams and Helen Maudsley. As a mature student at this point, he arranged to complete his studies through 'self tutoring' through the head of school, William Dargie. From 1949, Brack worked in the Prints Rooms at the National Gallery of Victoria as a frame-maker but was encouraged by the keeper of the collection, Ursula Hoff to study the collection. From 1952 he became a part time master at Melbourne Church of England  Grammer School  whhich gave John more time to paint. Although he was appointed as Head of the National Gallery Art School in 1962, he resigned in order to pursue his artistic career after just six years.

Rejecting the romantic expressionism and abstraction of his contemporaries, Brack found his subject matter in the immediate world around him: the nine-to-five drudgery of commuting city works in his masterpiece Collin st 5pm. which the National Gallery of Victoria purchased in 1956. With their black outlining, his linear paintings owed something to the style of Bernard Buffet, but the themes were his own, expressed with an ironic detachment in a quasi-satiric manner.

In 1953 he had his first solo show at  the Peter Bray Gallery, Melbourne, followed by others in 1955 and 1956. In 1959, Brack participated in the Antipedean Exhibition at the Victorian Artists Galleries, but resigned as secretary and treasurer when he refused to take sides between abstraction and figuration. As well as nudes and portraits, Brack worked through his themes in carefully thought-out series, including the the Wedding (1960) shop-window of surgical supplies (1963-4), Ballroom dancing and Gymnasts.

In late 1972 at the age of fifty-two, Brack made his first overseas trip to Europe visiting any of the museums. The museum postcard paintings he produced after his return signalled a shift towards meditations on humanity and past civilizations. John Brack passed away in his Melbourne home in 1999. 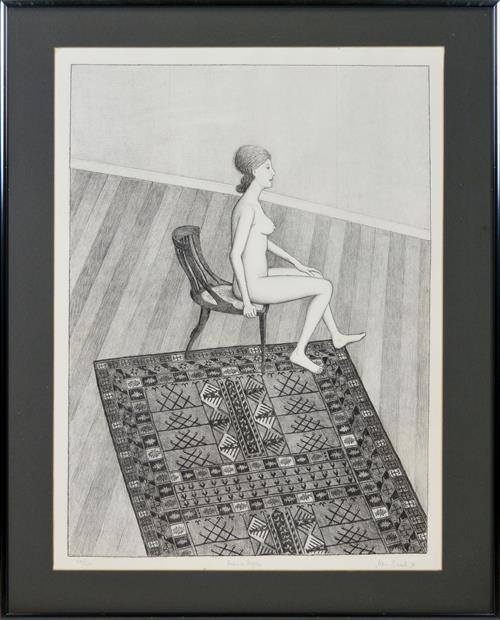 The profile of a nude is a lithograpth print that follows his painted figurative subjects. Published as a limited edition in 1978 by Druckmana Press, the artwork featureas a side view of a nude in an almost abstract/cartoon manner. According to similar compositions, in the Art Gallery of New South Wales, commentators have remarked that contrary to Western tradition, Brack's works presents the nude as sexless and alienated from the viewer. The impersonal nature of Brack's nudes are heightened by the stylisation of the figure which reduces the individual features to architectonic forms. In  response, Brack commented sympathetically  that 'When I paint a woman... I am not interested in how she looks sitting in the studio but how she looks at all times, in all lights, what she looked like before and what she is going to look like, what she thinks, hopes, believes and dreams.

Although this is the one representation of a work of art by John Brack in the University's art collection, it is a fascinating one to view and study particularly when viewed against Brack's thoughts and feelings about the subject.

Please feel free to comment about this and any of the University's works of art as it is important to understand the viewer's points of view. Comments can be sent through to Alex.Stalker-Booth@canberra.edu.au.