Frederick Cress was born in Poona, India, on 10th July 1938 but moved to England with his parents in 1948. He was educated at the Birmingham College of Art in England, and later migrated to Australia in 1961 as a "ten pound Pom", meaning that he only had to pay ten pound for his fare to Australia.1 He started his career painting figuratively, but his style changed slowly over time to abstraction and abstract expressionism which led the Australian art style being exhibited in the 1970s.2

Following a  travels and work overseas , notably in the  United States, Cress made his home and base in Sydney, where in 1988 , as a high point to his career, he won the Archibald Prize in 1988 for the portrait of his friend and artist, John Beard. According to Etching House,  Cress also won the People's Choice award  in the same year  and the only artist until 2003 to do so in the same year.3  From 1988 onwards, Cress' work returned to more figurative styles.

Perhaps the best description of Fred's style comes from the Etchinghouse website and art historian, Bernard Smith who described Cress as the 'most stimulating and in many ways the most professionally competent.' Cress worked in the 'the lingua franca of mixed forms and images which has arisen all over the world in recent years from the conflation of figurative modes (expressionist, neo-dada, and pop) with abstract expressionionism, hard edge and optical painting.'4

According to Laura Marray Cree, Cress's later paintings evolved from stage-like interiors where winders and curtains act as animated elements and frames for symbolic objects and glimpses of landscape to the full disclosure of parks and gardens. . Here peoples lives become suburban revelations of the Seven Deadly sins....' 5 Something that should be kept in mind when viewing the two works in  the University's collection. 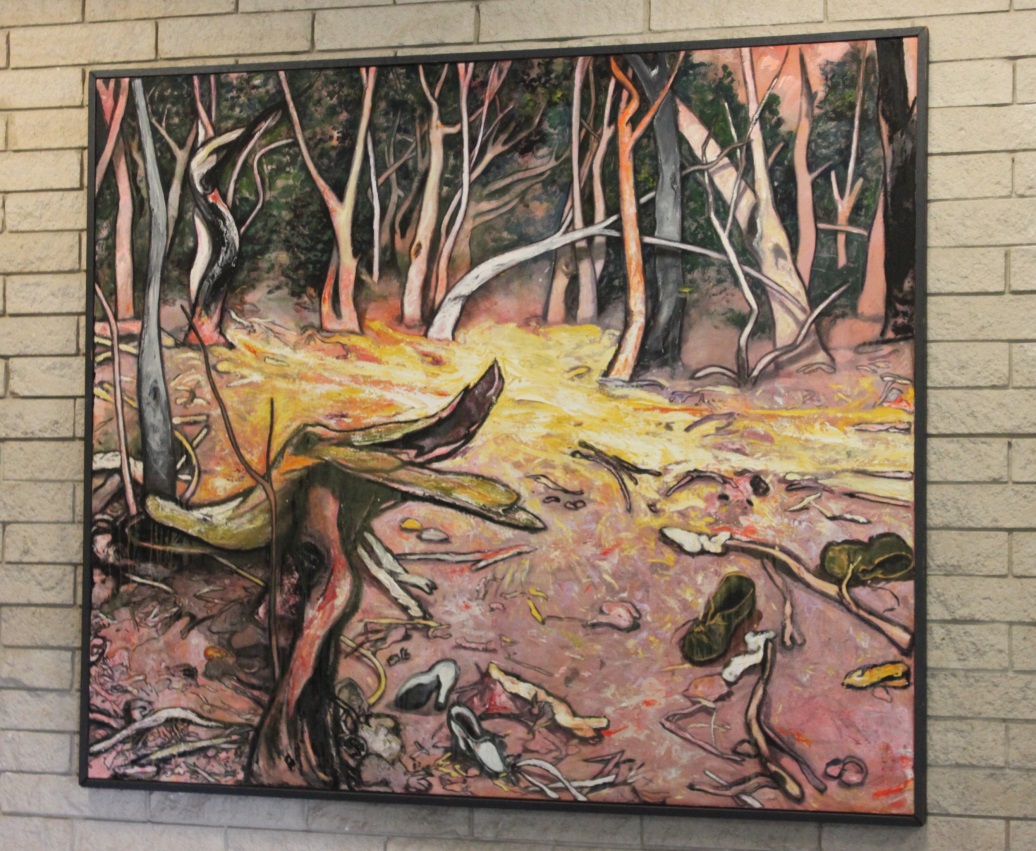 A Hidden Place by Fred Cress.

Purchased in September 2015, this painting hi-lights the figurative and abstract nature of Fred Cress’ art. Set in a clearing in the bush, the boots and high-heel shoes are representative of human nature. It is an abstract scene devoid of people yet one can guess what the scene may have been. Many of Fred Cress’ later works of a similar size have the same graphic edge but are full of human activity which hi-lights even further the abstract nature of this work.  According to Laura Murray Cree, Cress’ paintings observe the nexus between human weakness and treachery, or to borrow from Jean-Paul Sartre, the hell that is ‘other people’. 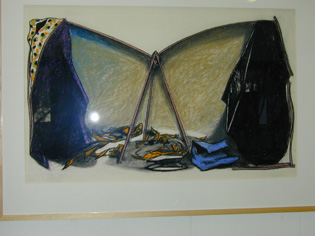 A Hidden Place is one of two works of art in the University of Canberra’s Art Collection by Fred Cress. The second work of art is a work on paper called Secrets 24. This work is part of a series of abstract images that conjure up large sheets of fabric partly exposing clothing and other detritus. The image works very much in the same way as ‘A Hidden Place’. It is suggestive of human nature.

If you like this work, you may like to explore similar works of art in the same style by Paula Rego.