Frank Hodgkinson was born in Sydney, 1919, he studied art at RAS with Sydney Long and moved to London to study art at the Central School of Art and Craft between 1936 and 1938. Further art studies were cut short with the outbreak of war. Hodgkinson enlisted in the AIF and saw active service in North Africa, Syria and the Kokoda Trail, PNG. As a war artist, Hodgkinson covered the assault landings in Borneo. According to Wagner Art Gallery's tribute to Frank Hodgkinson, during his service, he was mentioned in dispatches for conspicuous gallantry on the Owen Stanley ranges. His experiences deeply effected him as both a man and an artist.

Following the war, Frank lived in London, Paris, Madrid, Mallorca, Florence and Rome and briefly the United States where he exhibited widely and achieved recognition as an abstract expressionist artist. Frank's interest in the Spain of Goya deeply affected him, particularly the bull fight and the poet Garcia de Lorca. Accepted and influenced by other Spanish artists such as Vela, Suers, Canogar and Tapes he exhibitied his works  at Tate, London. Frank described the paintings and sculptures which he exhibited in 1967 as 'inquisitions into the nature of Spain, the Andalusion Spain of Garcia de Lorca whose poetry triggered off my seeing'.  and refers to the 'insight he has allowed me to glimpse of Spanish character, an experience which has extended my essentially Australian self. My struggle has been to grasp the essence of the coutnry and to find metaphors in paint and sculpture to link the antagonistic world of animate and in-animate life in a Spanish and yet universal way.'

In 1971, Hodgkinson returned to Australia  and concentrated on painting the remote areas of the country including the Coorong, Flinders Ranges, Lake Eyre, the Kimberley and regular visits to Arnhem-land. In Kakadu, Hodgkinson was instrumental along with Colin Jack-Hinton, in setting up the artists-in-the-field programme sponsored by the Museums and Art Galleries, Northern Territory.  Of his works in Arnhem-land, Hodgkinson wrote, 'wilderness is a time-stopped world, an original world of slowly evolved ecology belonging to primitive man - a world in which modnern man is an intruder.  I inturde beause it makes me feel primal,, unclutters the vision, clears the way for a fresh beginning... For me communication with nature remains the essential condition. The artist is human, himself nature. Working in a wilderness I am unable to distinguish between the feeling I have for life and my way of expressing it."

Frank went onto further adventures by trekking across Zimbabwe in 1990 and took on a role as art-in-residence in the National School of Art, Papua New Guinea. Frank passed away on 20th June 2002. 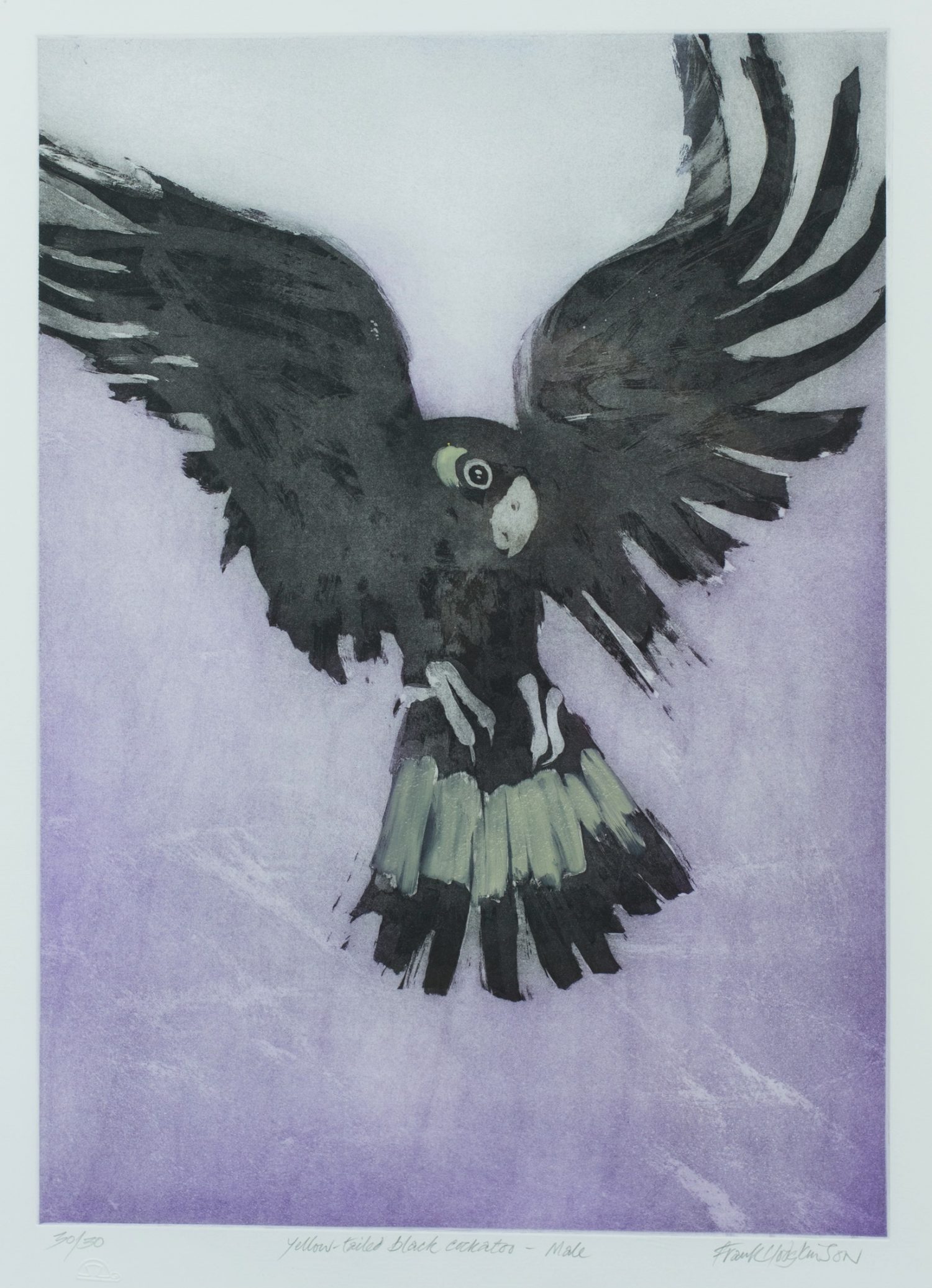 The Work of Art: Black Cockatoo

Although Frank Hodgkinson is known for abstract expressionism, many of his works of art focus on nature. His works are often quite realistic and true to nature. The acquatint print of a yellow barred black cockatoo is an example in the University's art collection of just such a work of observation.

Other works of art by Frank Hodgkinson held in the University's art collection include an ink drawing called the Seed.