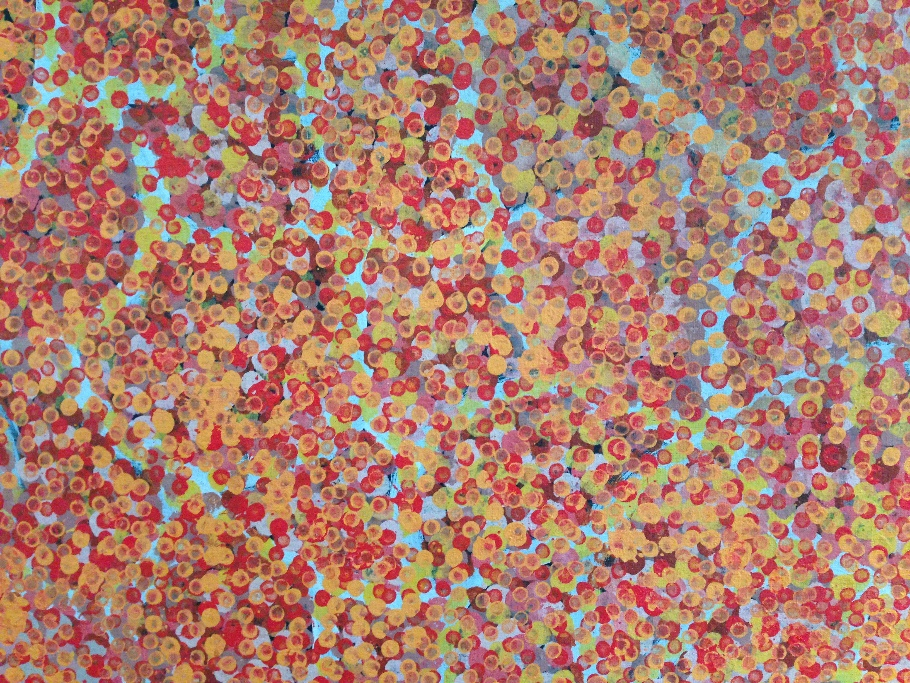 Emily Kame Kngwarreye was born around 1910 in Alhalkere (now known as Utopia), 230 kilometres north-east of Alice Springs.1 From the 1920’s, like many Indigenous people in the remote central desert, Emily worked as a stock hand.2 After the passing of the Northern Territory Land Rights Act in 1976, Emily was able to return to her ancestral homelands.3 In the following year batik was introduced to her community through an education program and she soon became a founding member of the Utopia Women’s Batik Group, marking the beginning of her artistic practice.4 Painting with acrylics on canvas was introduced to Emily’s community in the late 1980’s when she was in her seventies.5 At the age of eighty she began to produce paintings for the public domain.  Her paintings were immediately revered and by the 1990’s she had become one of Australia’s leading modern painters, with critics often comparing her to the New York abstract expressionists Jackson Pollock, Willem de Kooning and Mark Rothko.6 Emily continued to profusely produce highly sort after works until her death in 1996.7

Inspired by her cultural life as an Anmatyerre elder,  Emily produced over 3000 paintings over the course of her short eight-year painting career.9 Her lifelong custodianship of the women’s Dreaming sites of her clan country and in particular her yam Dreaming is the driving force behind her work (Kame meaning yam seed).  Her work displays an instinct created by decades of making art for private purposes, drawing in soft earth and ritual body painting.  Strong lineal structures whereupon individual dots overlap lines and appearing within others trace the appearance of seeds, plants and tracks on her country.10

During the early 1990s, at the time Awelye (her Dreaming) was painted, Emily began to use larger canvases, brighter jewel-like colours, pinks, blues and reds. Dots became lines, blurring and overlapping in spatially multifaceted compositions, obliterating the lineal arrangement of her earlier work.11

Kngwarreye’s work is represented in all major state gallery collections in Australia and in significant collections of contemporary international art in the USA, Europe and the UK.  In 1997 Emily represented Australia posthumously at the Venice Biennale, and in the same year Queensland Art Gallery staged a major retrospective of her work that travelled throughout Australia.12  In 2011 a second major survey travelled from the National Museum in Canberra to Osaka and Tokyo, Japan.13 She has had many solo and group exhibitions and is widely considered to be the most important and influential Aboriginal artist to date.