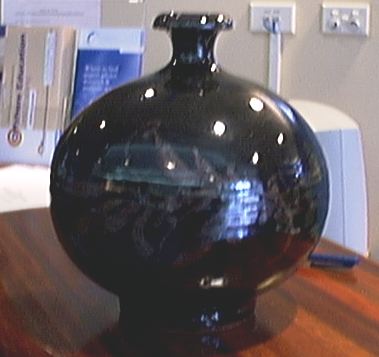 Doug Lawrie is one of the few artists within the Art Collection who is not an Australian. Doug was born in Los Angeles California and studied architecture at Stamford University and fine arts in ceramics from Claremont Graduate University. 1 He worked with Paul Soldner, who influenced his work.2 Having graduated, Doug then spent 15 years working in Japan working near Kyoto near Takeichi Kawai's studio. It was here he made the acquaintance of Les Blakeborough another leading Australian ceramicist. The friendship developed leading to Doug travelling to Australia in 1969 both working and exhibiting his works (Macquarie Galleries, 1970).3 Doug returned to Australia for a few years at the invitation of the Potter's Society of Australia to conduct a series of workshops and to exhibit his work again at the Macquarie Galleries and Blackfriars Galleries, Sydney.4 Doug Lawrie returned to California where he continued to work

'Untitled', also known as the Round Vase, is one of the earliest works of art acquired by the University of Canberra when the institute began as a College of Advanced Education The vase was created (wheel thrown) in 1969 in Kyoto, Japan using a traditional Japanese wood fired kiln which reached temperatures of 1300 degrees centigrade. 5 The vase is made of Shigaraki clay with a black iron saturated glaze with iron oxide brush decoration.6 The work of art was acquired with a second ceramic, known as the 'Square vase' also acquired from Macquarie Galleries at the same time.

The shape and design of the vase is reminiscent of stone-ware examples which may have inspired Doug Lawrie from Japan although, his mentor, Paul Soldner, has created similar works with short, narrow necks and openings. The Doug Lawrie 'round vase' is one of 29 ceramic works of art within the collection.