The work of art, Bimbimbie, is a textile creation that really shows the passion Diane Firth has for textiles as a medium.  Diane first began 'quilting' in 1982; progressing from making functional bed quilts for family and friends to producing art quilts for exhibition.1 Apart from foundation art training during her studies as a landscape architect, Dianne is basically self-taught in terms of sewing techniques. A regular exhibitor in Quilters Guilds and Canberra Quilters exhibitions, she has received numerous awards. Her work has been included in selected national and international exhibitions and Dianne is represented a number of private and public collections nationally. Dianne is also an Adjunct Associate Professor at the University of Canberra and Deputy Chairperson for the ACT Heritage Council. 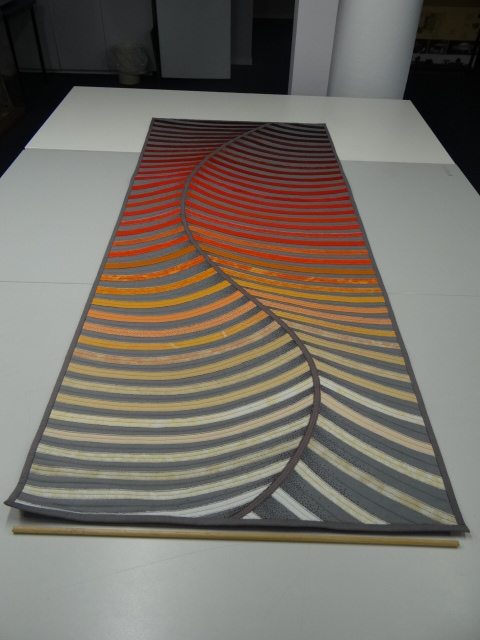 The inspiration for this textile is the Vice Chancellor's residence, 'Bimbimbie', which sits on a high point of the University campus overlooking the rolling terrain incised by Ginninderra Creek. When the creek floods it takes on the colours of the earth. According to the artist;s statement, Bimbimbie is an aboriginal word used on the campus and is thought to mean 'place of birds'. The work was originally commissioned  by the Vice Chancellor (Stephen Parker) for the entry foyer of the residence  in 2011. 2 Many of Dianne's works are inspired by the landscape. In an article in 2001, Dianne states, 'Although we lived in Newcastle, my family owned a tow-roomed shack in the bush at Port Stephens where we spent a lot of holiday time.  I roamed freely through the bush and deserted beaches, collecting bits and pieces, but mostly observing. From the locals I learned about plants and animals and the subtle features of the bush. I think this was the beginning of my love of the Australian landscape. There was also the annual New Year pilgrimage to the Blue Mountains and the contrast with the coast was always dramatic.' 3

'The most significant development in my recent work has come as a result of attending a Nancy Crow workshop in 1997 where I felt a strong affinity with what she was doing but rejected her mode of approach. I was inspired by her admonitions to free-up and her advice on establishing a body of work. Instead of piecing I started to tear and collage fabric, finding a new freedom in creating curves. I related these curves to patterns in the landscape...'4

The University of Canberra is fortunate to have other examples of Dianne's works within its Art Collection. These include 'Black Opal' and Red River.