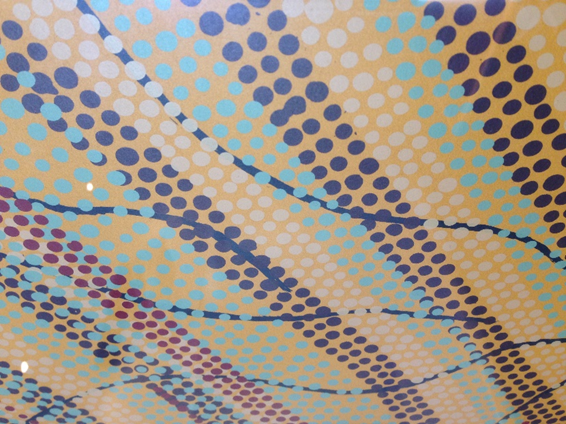 William Sandy was born around 1944 in Pitjantjatjara country near Ernabella in South Australia.  William grew up moving around the country south of Ernabella and also further north around Hermannsburg, Areyonga and Haasts Bluff. Eventually his family settled at Ernabella where William attended the mission school.  In 1973 he settled in Papunya, two years after the Papunya Tula Art Movement was established by Sydney school teacher Geoffry Bardon.  From the time of his arrival in Papunya settlement, William worked for the Papunya Council.  In the late 1980s, he and his wife Violet Nakamarra became health workers with the Papunya Medical Service.  He began painting in 1975, teaching himself after watching other artists at work. By the early 1980s he was painting regularly for Papunya Tula Artists.  William won the Caltex/NT Art Award in 1985. His work was included in the Dreamings show which toured the USA in 1988-9, and in the subsequent show of Papunya Tula artists at the John Weber Gallery in New York. He had a solo exhibition in 1990 at Gallery Gabrielle Pizzi.  William has concentrated on his painting full time since then and Violet also paints occasionally.  Subjects of most interest to William are Dingo, Emu, Woman, Green Bean and other Dreaming stories for his father and grandfather’s country.

Particular to Papunya, artists painting styles derive directly from the artists' knowledge of traditional body and sand painting associated with traditional ceremonies. Portraying these dreamtime creation stories for the public required the removal of sacred symbols and the careful monitoring of ancestral designs.  The work of the Papunya Tula artists is highly regarded and its unmistakable powerful style has resulted in the Papunya Tula artists being represented in most public galleries, major museums, institutions and many large private collections within Australia and overseas.  The aim of the movement is to promote individual artists, provide economic development for the communities to which they belong and, assist in the maintenance of a rich cultural heritage.