Ann-Marie McMahon is best known for her poster art. Her prints convey political, social and environmental messages and meanings of which formed the basis of many of her exhibitions.1

According to the Museum of Contemporary Art, Ann-Marie McMahon (also known as Marie) grew up on Air Force Bases in Darwin, Richmond near Sydney and the Albatross Naval Base on the South NSW coast. During the 1960s her family also lived in the Philippines before settling in Sydney. It is perhaps her formative years that influence much of her work in future years. Ann-Marie went on to join the Earthworks Poster Collective at the Tin Sheds Art Workshop, University of Sydney and contributed to the catalogue of posters. In 1980, Ann-Marie was one of a number of screen-printers recruited by the Aboriginal Arts Board at work at Tiwi Designs in the Northern Territory. 2

During the 1980s Ann-Marie worked as a designer at Redback Graphix in Wollongong and Sydney where a number of collaborative and cross-cultural print projects were realised, including the poster 'You are on Aboriginal land' and the Australian Government's health promotion ' Beat the grog' and Condoman' AIDS awareness campaign, developed in collaboration with Aboriginal and Torres Strait Islander health workers. McMahon worked in the Tiwi Islands from 1988 living at Batchelor south of Darwin until 1996 and from 2000 to 2001 at Gunbalanya, Arnhem Land, where she produced a series of collages interpreting the landscapes around her. Her most recent works, from 2009-10, have dealt with political conflict in Indochina and Cambodia. 3 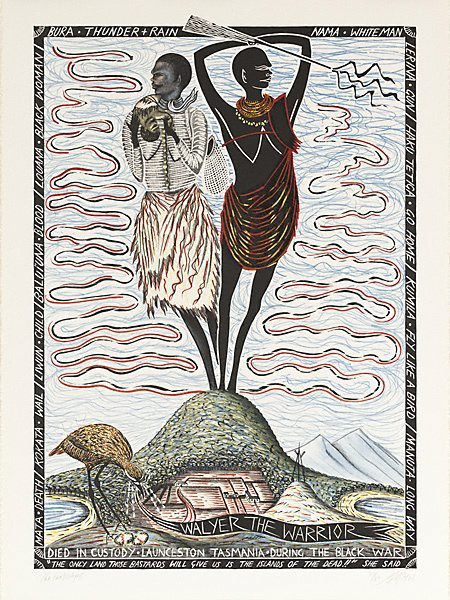 Ann-Marie McMahon's artwork depicts two people standing on a cliff. The woman is holding a baby on her shoulder and the men slightly above his head is holding a gun. These people are closely linked to the Aborigine groups in Australia where there was class division. The privileged race took the underprivileged as slaves. The land policy, favoured the exclusives, or individuals of established position, over the freed convicts, or emancipists, who sought to advance themselves disadvantaging the common individuals. Land was ultimately distributed through a random lottery, which allotted children parcels of land far from that of their parents or other Métis (an indigenous) group, destroying any chance of a Métis homeland. This led to the revolt.

The poster is  part of the  'Bicentennial Portfolio' by twenty-five  Australian artists created in 1988  of which a very limited run of 80 were produced. As such, this work is related to a number of prints displayed across the University. These include 'Untitled' by Micky Allen, 'Skyboats' by Brian Blanchflower and Yalambara by Banduk Marika to name just a few.

The Two Walyers and the Bicentennial Portfolio were purchased by the University of Canberra in 2003.