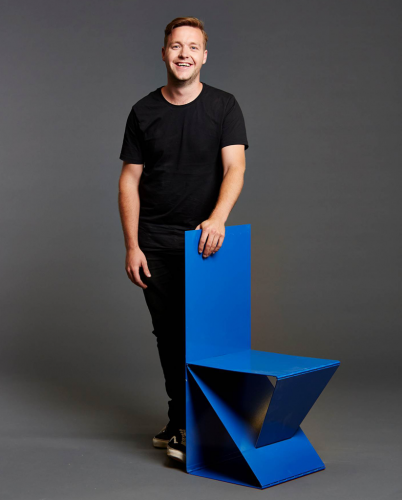 Tom graduated in 2012 and is already being recognised in the design industry. He was awarded NSW and ACT 2012 Graduate of the Year by the Design Institute of Australia, named as an emerging designer by Insidemagazine and selected for Indesign magazine's 'Galleria' exhibition in Sydney. Tom was also the runner up in QANTAS Spirit of Youth Awards in the craft and object category.

Despite "a few big offers" to move, he said he doesn't have any plans to leave Canberra, with part of that being because of his time at the University.

"UC is famous in the design community; they've done a lot for industrial design in Australia, so we need to commit to staying here to keep that culture going.

"Studying at UC taught me a broad range of design skills from how products are designed to understanding the considerations that designers face. One of the main things I learnt was how to sketch and draw my designs, which I think is one of the most important parts of the process. You can also form a relationship with your tutors and learn and understand from their styles. It's a good balance between professional and industry."

Tom was also asked to return to UC to tutor this year which he saw as a great way to give back to UC, "I always loved the idea of teaching and being able to give back in some way, but I wasn't sure through what avenue I would do this outside of mentoring in my company, so I'm grateful to have been offered the opportunity to do so by UC".

Tom has products featured in many of Canberra's bars and eateries, even the new UC Bar "Zierholz" features some of his signature stools and he is working with an Australian supplier preparing to distribute he works through Asia.

"I'm starting to crack into markets nationally and offshore and my brand is extending, but there's no reason I can't do this from Canberra. Canberra is a really nurturing place and it's an open, blank canvas where there's so many other avenues to explore, I've been fortunate to be able to build and extend my company here."

Known for his signature stools, Tom's commercial profile is in homewares and furniture but he has produced other works like his award winning Aluminium Chopsticks and an Axe he made for his Brothers 21st birthday.

"My commercial profile is homewares and furniture so I wanted to show a bit of diversity to my work that's not necessarily associated with my company or aligned with my brand – as the creative expression of me. The axe that I made for my brother, I thought was a beautiful symbol of coming of age, and hand-made anodised aluminium chopsticks that were inspired by traditional Japanese wooden ones, as I like to combine traditional processes with commercial processes."

Tom's interests in Canberra don't stop with the design industry. He is also partner in the Lonsdale Street Roasters new espresso bar in Kingston Foreshore "Remedy" and just set up a gourmet sausage stall for summer in Braddon, BING BANG, along with University graphic design graduate Luke Chiswell.

"For BING BANG we wanted to create more simple food options that were honest and using local produce. It's a fun spin-off from conventional product design. I like to create products that resonate in a personal environment and create a certain mood and feeling."