Kathleen Rayment
Making a splash as the Senior Media and PR Coordinator for Swimming Australia. 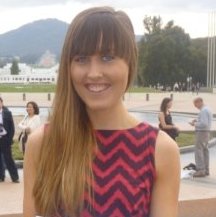 Diving into the deep end while studying a Bachelor of Sports Media at the University of Canberra, Kathleen Rayment landed a dream job in the Media and PR team with Swimming Australia after completing her internship with the organisation in 2011.

Growing up with a love for sport, she began the degree initially hoping to one day be the host of popular sports news show 'Sports Tonight'. Although the show didn't survive, but she 'had fallen in love with the degree as it combined both my loves of sport and media' and continued.

Kathleen says there is no such thing as a typical week in her job, as it varies between preparing for major events, writing media releases, organising interviews, updating social media and filming new content with athletes. She has had the opportunity in her role to meet and work with some of the greatest athletes in the world, including Harry Kewell, Kobe Bryant, Dawn Fraser, Ian Thorpe and John Bertrand.

"Hearing their stories first hand and sharing my own with them is so exciting. I feel like I have plenty of tales to tell the grandkids when I'm older!"

Overseas travel is a particular highlight for Kathleen as she attends overseas training camps and major events with athletes.  In the last five years she has had the opportunity to travel to places such as Turkey, Dubai, Singapore, Russia and the 2012 London Olympic Games.

"Travel is fun, but it also affects relationships and activities back home. You can be away for a month at a time and it does get tiring, even if you don't travel to the event you may be required to write, tweet or cover an event at all hours of the day/night. Media is a 24/7 job."

For Kathleen, preparing for a major event like the Olympics or the Commonwealth Games begins up to a year in advance, as 'swimmers typically only get a chance to impress every four years'. To do this, they must take full advantage of the attention given to the sport during in the lead up to the games.

Social media has played a big role in changing the way people view these major events; giving them more access than ever to their favourite sports stars. Although there are concerns about blurring privacy boundaries for athletes, Kathleen believes it should be embraced as should the changing nature of the Games themselves as sports change and evolve.

"Sport is entertainment and the Olympic Games are a massive entertainment property. It is important for them to evolve with the times, as they have done for years, and this is vital to ensure the Olympics remain interesting and competitive."

For Kathleen, the highlight of her career so far was having her own back page photo and story spread in newspapers across the country. It is something that wouldn't have happened had she not listened to the advice of an old manager who told her to 'always back herself' and not to doubt her own ability. As a young woman who has succeeded in a very male dominated industry it is advice she encourages other graduates to heed as well.