Bachelor of Communication in Advertising and Marketing, 1998 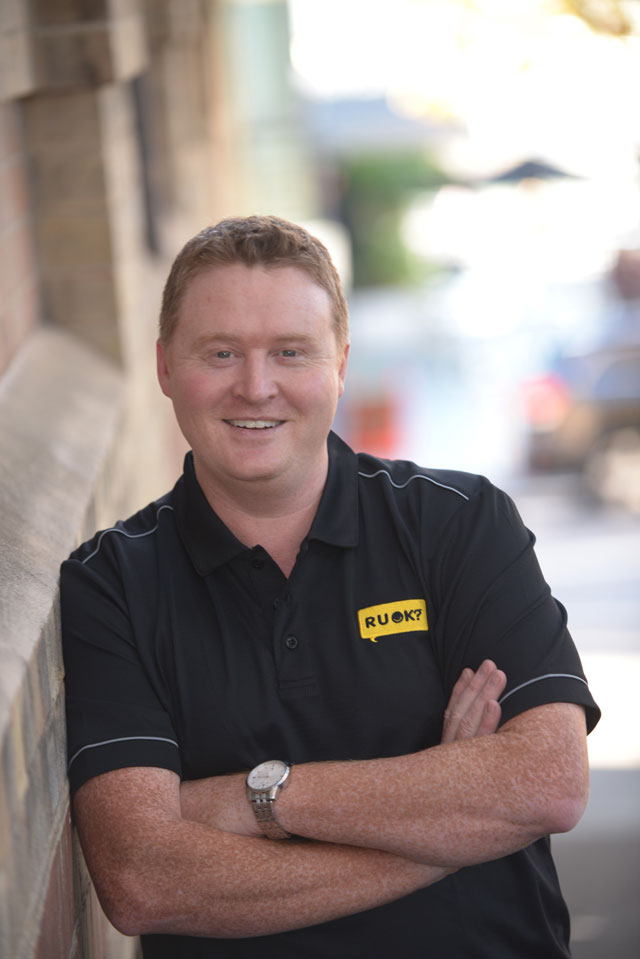 Making the switch to the not-for-profit sector has given UC Alumni Brendan Maher an amazing and rewarding career. Currently the CEO of suicide prevention organisation R U OK?, Brendan hopes to reduce the stigma associated to mental health and promote healthy conversations around Australia.

Graduating from the University of Canberra in 1998 with a Bachelor of Communication, Brendan majored in Advertising and Marketing. The practical aspects of the course providing him with skills he could immediately apply to his career when he joined The Communications Company (now known as Zoo Communications) straight out of university.

A year in Dublin with a direct marketing agency saw him return to Zoo where he worked for a further five years; setting him up for his career. While at Zoo he began working on a national rebrand for Lifeline, one of his clients at the time. With a foot in the door, he took a role with the non-for-profit organisation that was unlike anything he had done before; setting up a Cannabis Information helpline.

Working his way up, he learnt on the go and found a great mentor before eventually moving into the General Manager position where he looked after the marketing, corporate relations and communications. After seven years with Lifeline he took a break, when an opportunity with R U OK? came up. Initially in a General Manager role, Brendan became the CEO of R U OK? in 2015.

Brendan's current role includes implementing strategies and plans, and making sure all activities and collateral are aligned to the core mission of the organisation. Working with a small (but amazing) team of 6, Brendan spends his time managing stakeholder relationships, growing partnerships, working on campaigns and visiting schools and offices around Australia.

While the organisation has faced many challenges over the years, they have worked hard to become a leading movement in the prevention of suicide.

"70% of Australians know of the R U OK? organisation and 1 in 4 Australian's have participated in some way on the R U OK? Day. People are responding to this initiative."

Mental health and the events that happen in our life that challenge our resistance are always easier to manage if you have people around with literacy and understanding. Mental health can be very confronting, but the more you know, the easier it is.

"The more we can do to upskill people and give people the capacity to notice when someone might not be doing ok, the better."

As part of the 2016 R U OK? Day Brendan is asking all Australians to make more time for the people in their lives who matter most, and in the process help create a more connected world for all of us.

"Ideally conversations need to happen all year round. R U OK? Day is just a spotlight to get on the radar and forefront of people's minds" says Brendan.

For students and young graduates looking to pursue a career in the not-for-profit sector, Brendan suggests finding something that you are passionate about and looking for ways to get your foot in the door 'in whatever shape that looks like, even if it means something that is out of your comfort zone.' He also advises to find a great mentor.

"Working in the community sector is an amazing and highly rewarding career. I haven't looked back."