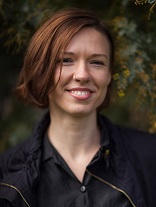 The Strays / by Emily Bitto

"Exploring the importance of female friendships inspired by her own childhood friendship" [VogueAustralia, June, 2015]

On her first day at a new school, Lily befriends one of the daughters of infamous avant-garde painter Evan Trentham. He and his wife are trying to escape the stifling conservatism of 1930s Australia by inviting other like-minded artists to live and work at their family home. Lily becomes infatuated with this wild, makeshift family and longs to truly be a part of it.
As the years pass, Lily observes the way the lives of these artists come to reflect the same themes as their art: Faustian bargains and spectacular falls from grace. Yet it's not Evan, but his own daughters, who pay the price for his radicalism.

Emily Bitto is a Melbourne based writer whose debut novel The Strays recently won the 2015 Stella Prize for Australian women writers. A devoted writer and animal activist, Emily alsoco-own Heartattack and Vine Wine bar with her partner in the suburb of Carlton, Melbourne.

Emily Bitto has a Masters in literary studies and a PhD in creative writing from the University of Melbourne. Her writing has appeared in various publications, including The Sydney Morning Herald, Meanjin, The Guardian, Heat and the Australian Literary Review. The manuscript of her debut novel was shortlisted for the 2013 Victorian Premier's Literary Award for an Unpublished Manuscript. The Strays was shortlisted for the 2015 Indie Prize, is currently longlisted for the Dobbie Award and is the winner of the 2015 Stella Prize.

'The Strays is an eloquent portrayal of the damage caused by self-absorption as well as a moving study of isolation. Her style is gently observant; she allows the reader space in which to develop their own compassion' - The Sydney Morning Herald. Michael McGirr, June 2014

'Emily Bitto has written a very stylish and enjoyable debut novel.' - The Sunday Mail, Brisbane, 18 May 2014

'Another favourite this year was The Strays (Affirm Press), Emily Bitto's hugely impressive first novel. The long central section, a meditation on family and friendship set in the 1930s Melbourne art scene, is magical. Bitto creates a world so densely imagined that it seems not just real but part of the reader's own past – and she does it in lovely prose.' - The Sydney Morning Herald, Michelle de Kretser, 6 December 2014

'This is a beautifully crafted tender novel of innocence, friendship and divided loyalties.' - Surf Coast Times, Nicole Maher, 28 May 2015

'The Strays, the debut novel from Melbourne writer Emily Bitto, manages to strike the reader with its intensity, atmospheric writing, and occasional shock value.' – The Creative Issue, Sophie Clews, 27 Feb 2015

We would like to thank Affirm Press for their kind permission to reproduce the illustrations which appear at the top of this page.