The University of Canberra 2016 Three Minute Thesis (3MT) winner was Gregory Mowle, who delivered a thought-provoking and humourous presentation titled What can Charles Dickens teach us about financial literacy? He took home the prize of $2,000 and entry to the Asia-Pacific 3MT Final.

Second place and a $1,000 research grant was awarded to Sean Dicks for his presentation, The bereavement experiences of families of potential organ donors, which struck a chord with the audience as an emotional, but important area of research.

Past winner, Hayley Teasdale took out the People's Choice prize of $500 for her presentation, Parkinson's and the plastic brain.  She added to her prize pool by also taking out third place from the judges, and picking up a $100 gift voucher.

The 2016 University of Canberra 3MT Competition Final was held at the University's Ann Harding Conference Centre, on 6 September, with 16 finalists competing in front of an audience of more than 100 people.

The 2015 University of Canberra 3MT Competition Final was held at the CBR Innovation Network, on 8 September.

Hayley Teasdale from the Faculty of Health won the competition delivering a 3MT presentation titled 'Finding Your Feet- A New Way to Train a Brain with Parkinson's Disease'.

Catherine McMaster, also representing the Faculty of Health placed second with her presentation "Knee Health: osteoarthritis and ageing – a moving tale of the femur and tibia'.

Max Halupka from the Institute for Governance and Policy Analysis (IGPA) whose 3MT title was 'The emergence of the Information Activist'. 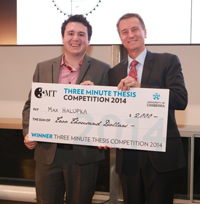 Academia is a competitive industry, and the 3MT seemed like the perfect opportunity to showcase my research. I entered the competition to standout, to be noticed and solidify myself as a young researcher to watch out for. The 3MT, it has helped me to better understand my own work. Condensing 3 years' worth of research into 3 minutes forces you to hold a magnifying glass up to your work, and finely comb through it, picking out the most important contributions and findings. At the end of it all, you really do have a better understanding of what it is you are doing, and how to best explain that to other people. The 3MT helps to define you as a researcher; it cements you as an academic who not only has a firm understanding of the broader application of their work, but also of their own capacity to convey it to a non-specialist audience. And that is invaluable. The 3MT hoists you up among a sea of researchers, and gives you the perfect platform to let the world know how awesome your research is. 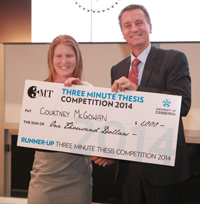 Courtney McGowan from the Faculty of Health with the 3MT title: 'Hot Swimmers are Fast Swimmers'.

Thosaphon Chieocharnpraphan from the Faculty of Business, Government and Law with the 3MT title: 'Australia and Thailand as strategic partners in the Asia-Pacific?'

2013 UC 3MT finals winner was Adrian Dusting from the IAE who presented 'Attack of the clones: the adaptive capacity of an asexual invader'. 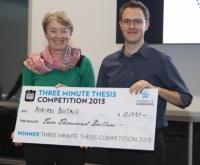 I entered the 3MT competition because I believe in the importance of effective communication of research. Postgraduate students often enter into research because they're passionate about a topic...However, as our research develops we become specialists, burrowing deeper into the specifics of our subjects. The 3MT allows students to step back, consider their project in a broader context and think about its relevance to the wider community. The more effectively we can communicate our research and its applications, the more valuable a contribution we will be making. The 3MT is a fantastic tool to assist research students to do just this. 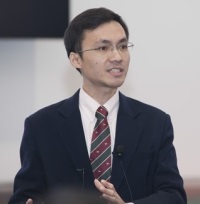 Thosaphon Chieocharnpraphan from the Faculty of Business, Government & Law presenting 'Australia and Thailand: strategic partners in the Asia-Pacific'.

No matter how great your research is, it is no use at all if you cannot communicate it to the general public effectively. The Three-Minute Thesis Competition is an answer to this conundrum. 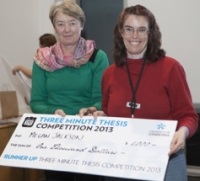 I entered the 3MT competition in 2012,  I was indeed able to summarise my work into a 3 minute presentation, and came out of the competition with a much more concise understanding of my research.

In 2013 I entered again.  This is because I am now finalising my research proposal and thanks to the learning from last year, my research is focused rather differently from its original starting point.  I enjoyed the learning associated with giving an engaging presentation in 2012, and I suspected that furthering that learning would have benefits both in terms of my lecturing role and possibly even a prize in the competition.  While I can't yet comment on the impact on my lecturing, I was very excited to place 2nd in the 2013 competition.

I strongly recommend participation in the 3MT competition to any and all UC HDR students at any stage of their candidature.  It will provide you with a much broader understanding of some of the fascinating research happening at UC, as well as give you a unique learning opportunity to better understand both your research and yourself.  Good luck for next year everyone!

Student Login Staff Login
Forgotten your password?
Back to top